I suppose Ministers of Finance don’t always get to approve the promotional material for their speaking engagements.

Yesterday, I got to the end of last week’s Spectator.  I don’t usually notice the back cover, but this time I couldn’t really miss the half page photo of Bill English, with the caption “This man runs harder than Sonny Bill”.  It was a promo for a Menzies Research Centre function next month: for A$220 a ticket our Minister of Finance, “co-architect of their resurgent economy” will “offer some insider tips on their game plan, because rugby isn’t the only thing the Kiwis are good at.  Tips that transformed the country”.

I’ve noted previously my puzzlement at this line from the right wing of the Australian commentator/think-tank community, who talk up New Zealand’s economic reforms, and policies.   I presume it is designed to exert some sort of leverage in Australia (“if even the Kiwis can do it, surely we can”).

Perhaps the rhetorical strategy works.  Perhaps it has a “feel-good” aspect to it.  Perhaps it just enables people to vent some frustration at their Senate. There was something a bit similar in late 80s and early 90s, when policy reform here was more extensive, and perhaps better-grounded in economic principles, than that in Australia.  I well remember that I was to pass through Sydney the Monday after the 1993 federal election.  The Liberals were widely expected to win, and I was lined up to do a lecture at the RBA about the Reserve Bank of New Zealand reforms in anticipation that John Hewson would soon do something similar.  Journalists were even invited.  And so it was all a bit awkward when Keating pulled off a late victory.

Back then perhaps there was a plausible story that we were doing reform better than they were.  Fans of compulsory savings would no doubt disagree.  There are still plenty of areas where I’d rate quality of regulation here better than there –  taxis are my favourite.   But the numbers favour them.  But to anyone looking into the numbers, all this talk now of New Zealand as a “transformed country” over recent years must seem almost completely wrongheaded.

There is one, non-trivial, dimension on which New Zealand might reasonably be judged to be doing better than Australia: our budget deficit is smaller than theirs.   But bear in mind that general government net debt, as a percentage of GDP, is still higher in New Zealand than in Australia (gross debt is identical).  The differences aren’t large, and neither country looks either that great or that bad by international standards. 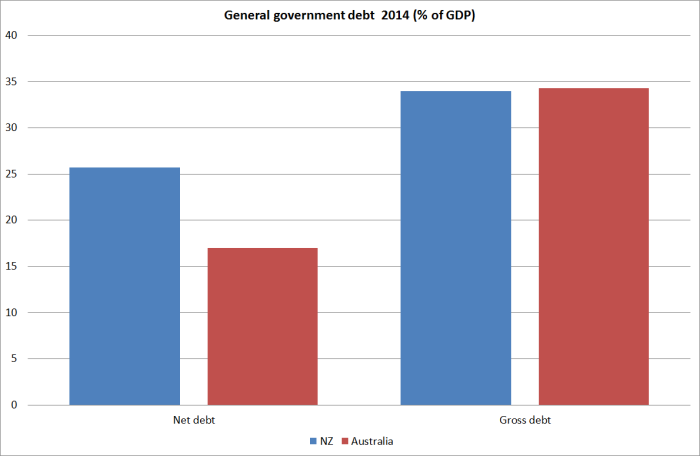 If Australian deficits are still larger than ours, that partly reflects the timing of the respective terms of trade cycles.  Australia had a big boom over recent years that we did not really share in.  The terms of trade went sky high, as did business investment (which also means lots more depreciation expenses to offset against taxable incomes).  Their unemployment rate undershot ours for a while (that doesn’t usually happen) and their policy interest rates went above ours for a while (again, that is pretty rare).   Their terms of trade peaked in 2011, and now are almost back where they were in late 2007 (2007q4 is the conventional date for the last quarter prior to the recession).  New Zealand’s terms of trade didn’t go up so much (but exports are a larger share of GDP in NZ than they are in Australia), and peaked only last year.  Current revenue has until very recently been reflecting those peaks.  There are plenty of optimists around suggesting NZ commodity prices are just about to rebound.  Perhaps they’ll be right, but optimists were taken by surprise in Australia too

I’ve shown before the chart of productivity (real GDP per hour worked) for the two countries.  New Zealand has done really quite badly in the years since 2007 (absolutely and relative to Australia).

Neither country’s government has much influence over the respective terms of trade (I’d say none) but for what it is worth, here is the chart showing the real per capita real income measures (that capture the direct effects of the terms of trade) published by the ABS and SNZ.  Each country measures a slightly different thing, but for these purposes they are close enough. 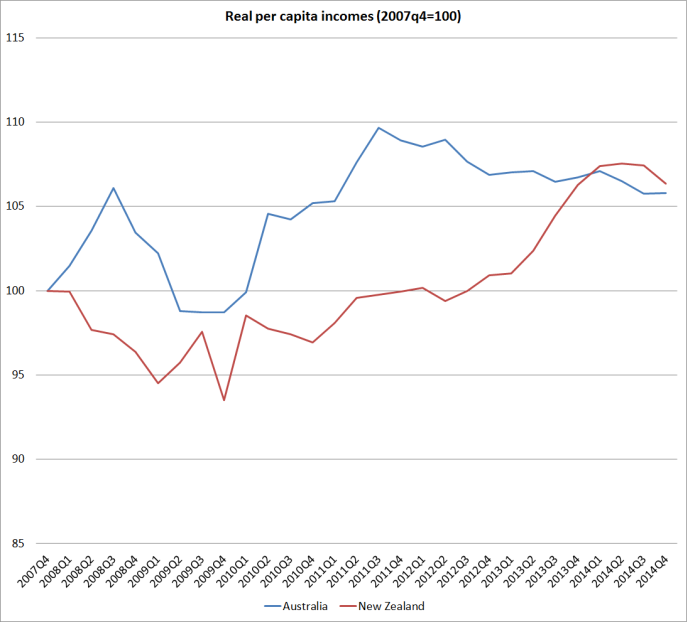 Sure enough, using a base of 2007q4, New Zealand is now just a little higher than Australia.  That reflects the way our terms of trade, as at the end of last year, had not yet fallen very much in comparison to the fall in Australia.  But the end-point difference is trivial, and even if the two countries’ terms of trade level peg from here it would take a lot of years for NZ to make up for the loss of income relative to Australia in the previous 5-6 years.  And there is plenty of reason to expect our terms of trade to fall further.

In the end, as I’ve said, before I don’t really understand this Australian meme that somehow New Zealand has been managing itself much better than Australia.  The dominant story of the last 50 or more years is of how New Zealand has fallen behind Australia.  Nothing this government (or its predecessor for that matter) has done so far seems to have made much difference to that picture.  Some Australian commentators laud the 2010 tax package, but even then it is worth remembering that that package raised the effective tax rate on capital income (don’t take my word for it, it was in the Treasury numbers).  If anything, our productivity performance looks to have been drifting even further behind.

The net outflow of New Zealanders to Australia seems, at least temporarily, to have almost ended.  In itself that is encouraging, except that it probably reflects the fact that the unemployment rates in both countries are now quite high – historical relativities have been more or less restored.  And recall that post-1999 New Zealanders in Australia can’t now get welfare benefits when the Australian labour market turns down.

I don’t understand the meme, but perhaps it sells tickets.

A commenter, Kelly, writes as follows:

Michael – is it necessarily true that the failure ( or lack thereof) of a bank stress test is the benchmark for assessing the worth and more specifically the legality ( in terms of consistency with the RBNZ’s act) of regulatory action? The relevant section of the Act says if I remember correctly that the Bank must use these powers for the purpose of ensuring the soundness and efficiency of the financial system. While the stress test results are one potential indicator they are not a necessary condition to justify regulatory action. Indeed I suspect that very little prudential regulation might be justified if this were the case. Stress tests are indicators of what might happen given a number of important assumptions any of which may not be true in real life. Also stress tests almost always are calibrated to ensure banks pass them ( or else additional capital should be added by failed institutions). History shows that stress tests have a poor record at predicting financial crisis. I think many reasonable people would consider a large fall in Auckland house prices might challenge the stability of the financial system in NZ. It’s true that in some circumstances it might not but would you expect the Bank to bank on being that lucky? The spillovers to the rest of the country would potentially be great.

The Bank’s actions in this area are in step with the generally successful international experience with regional LVR type measures. I think that this alone makes it difficult to argue the Bank is acting in an ultra vires manner. The IMF’s advice in this area is that macro prudential measures can be employed assuming key macro policy settings are also supportive. Your stance on monetary policy settings thus seem further supportive of the Bank’s stance. Although I am sure that the government could be doing more to help as you point out.

I’ve always enjoyed debates with Kelly, and I thought it might be worth addressing a few of the points he makes:

Perhaps all will become clear when the Reserve Bank releases its consultative document on the proposed new controls.  I certainly hope so.     But there is a lot to clarify.