Terry Hall’s column in the Dominion-Post this morning is headed “Auckland housing ‘bubble’ has worrying shades of 1987”.

This just seems wrong.  Following 1987 New Zealand experienced a pretty severe financial crisis in which many corporates collapsed, and several major financial institutions either collapsed, or had to be bailed out by shareholders (including, in the BNZ’s case, the government).

It came, as financial crises typically do, on the back of several years of extremely rapid credit growth, far outstripping the rate of growth in incomes (or nominal GDP).  Private sector credit growth exceeded 30 per cent per annum for several years (charts here)  It was an environment of debt-fuelled craziness, of a massive commercial construction boom, and credit extended to “investment companies” with, it seemed, nothing behind them either than the hope-and-credit-fuelled values of other investment companies.  Claims were heard that New Zealand had a comparative advantage in takeovers.  Newly deregulated New Zealand and Australian lenders seemed to have few disciplined skills in credit or analysis, and as happened in several other countries at around the same time (eg the Nordics) it ended badly.

Take the current situation by contrast.  Yes, Auckland house prices are a social and political scandal, but they seem quite easy to explain on the basis of some simple fundamentals: restricted effective supply of developable land on the one hand, and rapid population growth (fuelled by cyclical differences between here and Australia, and an aggressive government programme of inward migration).  Where that combination of pressures isn’t apparent (which is most of the rest of the country) there is no particular or unusual upward pressure on house prices.  Indeed, in large parts of the country real house prices are lower than they were in 2007, the peak of the previous boom and just prior to the recession. 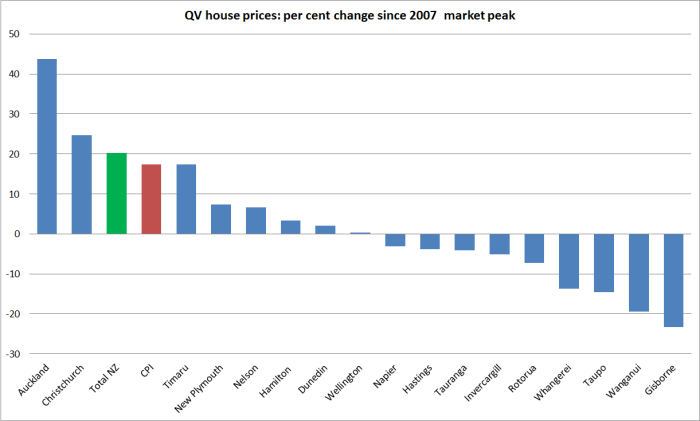 It is difficult to think of a serious or systemic financial crisis anywhere that has not been preceded by rapid credit growth.  There may be exceptions – and I’ve urged the Reserve Bank to document those cases for us, if they can find them – but it is wise for regulators (and investors/shareholders) to be more uneasy than usual when credit is growing rapidly.  In those environments, lending standards tend to drop, and poor quality borrowers too readily get credit for propositions that won’t look good in the cold light of day.  But if credit growth is subdued, and has been for some years, the risk of any sort of financial crisis is likely to be very small.  In a New Zealand context, a prudential regulator might reasonably have been worried in 2007.  As it happened, without cause:  despite very rapid credit growth in the preceding years, bank lending decisions turned out to have been pretty robust.  Funding structures were a different matter.

But what is the situation now?

The Reserve Bank has six credit aggregates on its website.  Each has its advantages and disadvantages, but the overall picture is much the same whichever one one looks at.  This chart shows all six, as a ratio to nominal GDP, up to March 2015 (I’ve included a guess for nominal GDP growth in March quarter).  Credit to GDP peaked back in 2008, and in the seven years since then has shown no hint of moving to new peaks.  Given the sharp upward trend over the 15 or so years prior to 2008, this is a huge change. 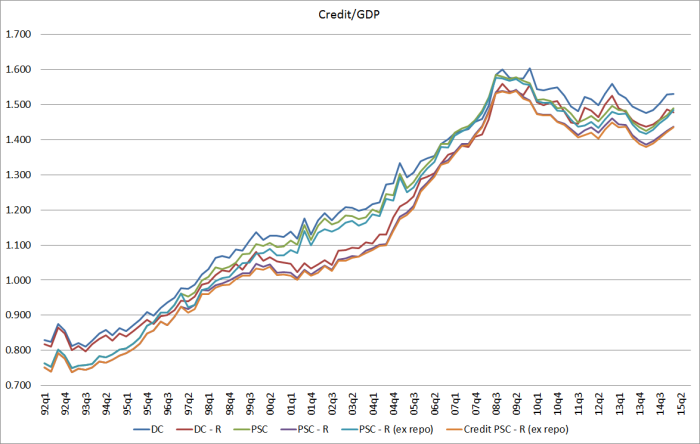 And what of annual growth.  This chart shows lending to households and the businesses (the latter including agriculture).  Lending growth to households has only been materially lower than it is now during the 2008/09 recession. 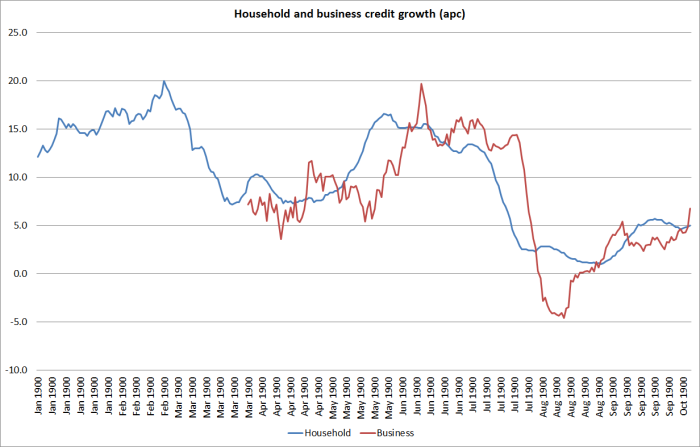 And it is often forgotten that there is still momentum behind the stock of household credit as a result of the increase in house prices last decade.  Houses don’t turn over that frequently and many properties being purchased today, in parts of the country with little or no new house price inflation, are being bought at prices higher than the vendor bought the house for (and took a mortgage for) perhaps 10 or 20 years ago.

For the current situation, consider the volume of new mortgage approvals – in recent months running below last year’s level, and well below levels seen in the boom years.

All of which brings us back to the Reserve Bank’s own stress test, reported in the last Financial Stability Report.  This was the most interesting scenario

In scenario A, a sharp slowdown in economic growth in China triggers a severe double-dip recession. Real GDP declines by around 4 percent, and unemployment peaks at just over 13 percent. House prices decline by 40 percent nationally, with a more marked fall in Auckland. The agricultural sector is also impacted by a combination of a 40 percent fall in land prices and a 33 percent fall in commodity prices. The decline in commodity prices results in Fonterra payouts of just over $5 per kilogram of milksolids (kg/MS) throughout the scenario.

And this was the result

Higher credit losses, combined with a decline in net interest income due to increased costs for bank funding, resulted in a significant decline in bank profitability. However, reflecting strong underlying earnings in the New Zealand banking system, these factors were only sufficient to cause negative profitability in a single year in each scenario

A repeat of 1987 is just not remotely in prospect at present.  If bank balance sheets start growing rapidly it might be time for some more concern, but at present issues around Auckland housing should be seen for what they are –  the outcome of policy blunders in which restricted supply runs into rapid population growth – rather than any sort of material threat to financial or macroeconomic stability.

I also noticed Liam Dann’s column in the Herald on a similar topic –  the headings are so similar the two papers could be sharing sub-editors.  Dann is clearly very influenced by his recent trip to China, with his explicit hankering for new controls and restrictions.  It is worth remembering not just that China is coming off a huge government-fuelled credit boom –  outstripping anything ever seen in New Zealand, even in the heady pre-1987 period – but also that the People’s Republic of China remains the outstandingly poor performer of the group of Chinese economies in East Asia. Over the long haul it is an underperforming middle income country with few or no policy lessons for New Zealand. 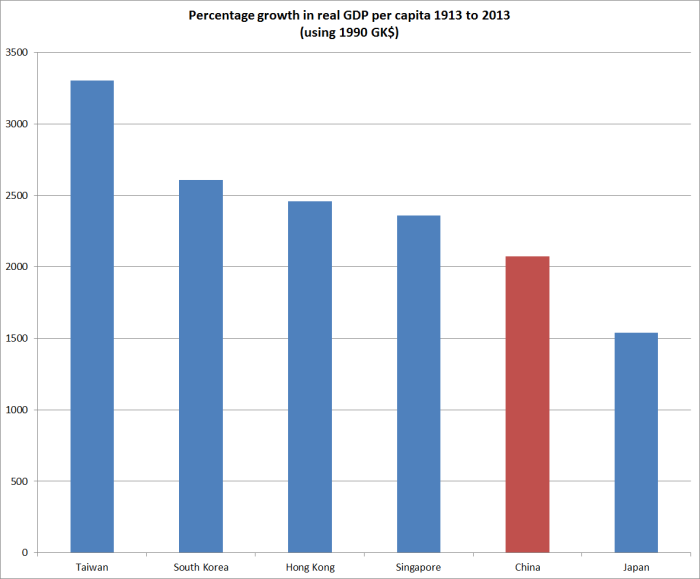