The Reserve Bank of New Zealand hasn’t had a good couple of years.  There was the  totally unnecessarily 2014 tightening cycle that was only slowly, and rather grudgingly, reversed.  More recently, we had the OCR cut in December that drove the exchange rate up, and then the Governor’s fairly strident (and defensive) speech early last month which convinced even most of the doves that he would take quite some convincing to cut the OCR again, only to move (and signal yet another easing) at the very next OCR review a few weeks later.   I don’t do on-the-record advance predictions of individual decisions, but I noted a few days ago to someone who asked that I thought a rate cut today was much more of a possibility than most of the local commentators, or market prices, were reflecting.  Nonetheless, today’s move was a pleasant, if mild, surprise.

Part of where they are going wrong is in the constant repetition of the claim that monetary policy, here and abroad, is very stimulatory.  In chapter one, the Governor again talks of “extraordinary monetary accommodation” overseas, and in chapter 2 he tells us he believes New Zealand interest rates are “very stimulatory”.    We can all accept that nominal interest rates, here and abroad, are low by, say, the standards of the previous 20 years.  But when interest rates aren’t much different than they have been for the now seven years since the worst of the crisis past, and all the while growth has been sluggish, inflation quiescent, and in most countries unemployment rates show no sign of labour markets overheating, it is difficult to know what meaning the Bank is attaching to phrases such as “very stimulatory”.  I know they are on record as believing that a neutral interest rate in New Zealand is 4.5 per cent, but if they really still practically believe that they most be some of the only people who do.  We know so little about neutral interest rates at present that it is simply unhelpful to talk of current policy being “very stimulatory”, especially if that view is feeding into the forecasts.  Probably all we can say is that policy is  easier today than it was yesterday.  But not even necessarily easier than three months ago.

I’ve pointed out before that, if anything, real interest rates (the better basis for any judgements) have been rising. not falling.  Here is the OCR updated to today, deflated by the two-year ahead measure of inflation expectations, for the last four years. 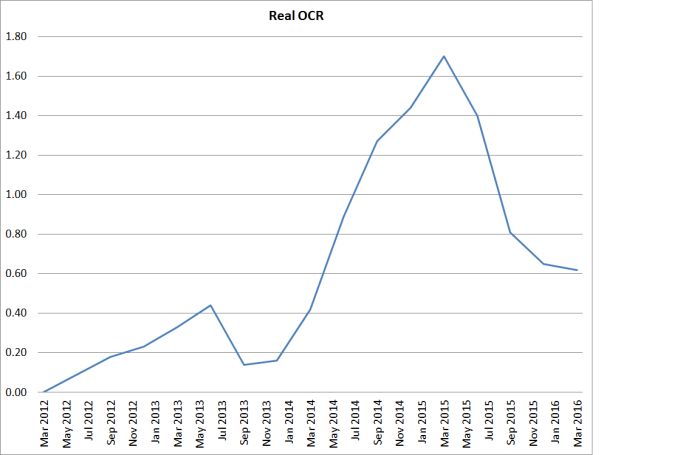 One problem for the Bank’s story is that today’s OCR cut is barely enough to offset the fall in inflation expectations (on this particular measure or others) since the last MPS.  There is no cut in real interest rates over three months.   And as the Bank usefully highlighted, longer-term funding cost margins have been rising for some time. 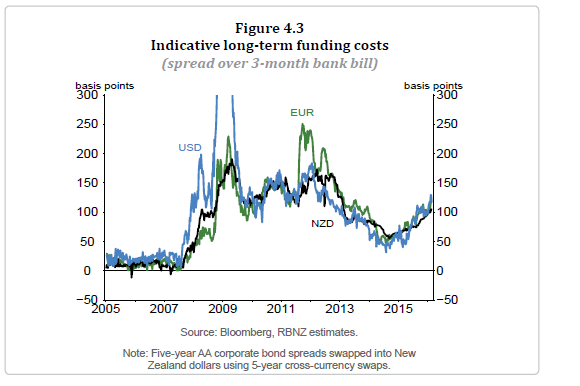 The Bank won’t want banks avoiding the longer-term funding markets –  a much larger share of longer-term funding was one of the useful post-2008 changes  – and so as things stand at present a cut or two in the nominal OCR may not be enough even to prevent real borrowing rates rising.   What has been done today is really the bare minimum that had to be done to avoid further amplifying the adverse consequences of past monetary policy mistakes.

I wanted to comment on three other aspects of the analysis or discussion in the MPS.

The first is around immigration.  At the last MPS the Bank made a fairly dramatic change of view.  They  explicitly shifted from the longstanding widely-shared view  –  supported by their own past published research – that the short-term demand effects of swings in immigration were generally greater than the short-term supply effects, choosing instead to adopt a view that either the demand and supply effects are roughly equal, or that the supply effects may even exceed the demand effects.  I asked for the background analysis or research supported this change of view. They flatly refused to release any of it (a matter currently before the Ombudsman). They said that they were preparing material in this area “with a view to publication” and I had wondered if ,say a new Analytical Note might come out today.  But there is still nothing –  no new publications, no substantive analysis in the MPS (nor even any recognition that the PLT data seriously understate what happened in the previous 2002/03 boom), just nothing.  It isn’t good enough, for a variable that is so important to short-term macro developments in New Zealand.

The second is around core inflation.  The Governor has gone out on something of a limb, explicitly relying on the sectoral core factor model measure of inflation to justify his stance.  As I’ve noted previously, it has been very unusual for the Bank to highlight any single core measure, and especially in key policy statements –  and yet the Governor has now done so in his January statement, in his February speech, and again in the press release today.  No analysis his been provided to support his preference –  and none of the market commentaries which have looked into the matter have seemed particularly persuaded.

In fact, it looks as though the staff don’t really buy into the Governor’s story either.

No mention of any priority being given to the sectoral core factor model.

And here is the chart (I’d previously highlighted how the Bank had used exactly this sort of chart when it introduced the sectoral core factor model to wider circulation). 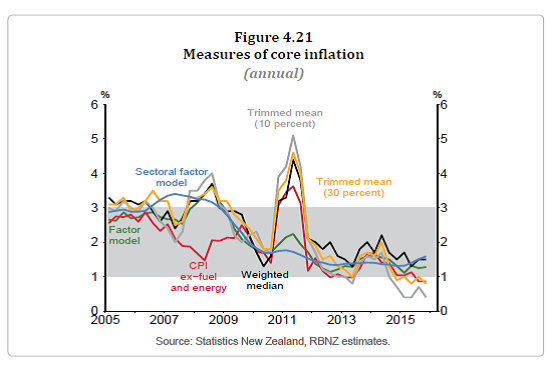 There are six measures in that chart.  The average of those six looks to be uncomfortably close to 1 per cent, the very bottom of the target range, and a very long way from the 2 per cent midpoint the Governor signed up for.

Rather more concerning than either of these points is the Bank’s repeated insistence –  in the text and at the press conference-  that longer-term inflation expectations are still “well-anchored at 2 per cent”   (not even “near” 2 per cent, bur “at” it).

They apparently have some new publications coming out soon on some of these issues, which will be welcome.  But for the moment, it isn’t clear quite what they are relying on for their view that there is no real problem with inflation expectations, let alone why they think that long-term inflation expectations (as distinct from something like a one to two year horizon) are what matter.  I discussed some of these issues here, noting that (a) very few people entered into fixed nominal contracts for any period remotely as long as 10 years, (b) that the longer-term survey measures relied entirely on economists’ forecasts.  Add to that the fact that, although the Governor said this morning that the Bank looks at market-based measures of inflation expectations, the implicit long-term inflation expectations derived from indexed and conventional government bonds get not a single mention in the entire document.    Those implicit expectations are currently just under 1 per cent –  on average, for ten years.

I’m not suggesting that these implicit expectations are a perfect representation of actual long-term expectations.  As I noted a few weeks ago, if forced to put a number on my 10 year ahead expectations, I might still say 2 per cent – recognizing that 10 years is quite a long time for conditions, and senior central bankers, to change.  But not to mention them at all seems like quite a stretch, especially when you rely instead on the expectations of a handful of economists.  And, as the Bank points out in a gotcha chart on page 8 of the MPS, if the Reserve Bank’s forecasts of inflation in recent years have been bad, those of other published domestic forecasters (ie the same economists whose inflation expectations they rely for support) have been even worse.

How much does any of this matter?

I suspect inflation expectations are less important, as some independent factor determining inflation, than the Bank or conventional wisdom would suggest.  But to the extent expectations matter they are those for 1-2 years ahead –  all now uncomfortably low.  Anything beyond that, except for bondholders, is largely of academic interest only.    But those shorter-term expectations are largely shaped by the recent trends in actual inflation.  In other words, expectations measures are a lagging indicator of something we’ve already seen (the trend in actual inflation).  The Bank has been somewhat spooked by the drop in shorter-term expectations and in a sense that is welcome –  a belated recognition that there was actually a problem with policy.  But to the extent that they so vocally continue to protest that nothing is really wrong over longer-term horizons, is a measure of how far they still are from really “getting” what has been going on. All else equal, we should expect core inflation to continue to surprise them on the low side.  They need to get inflation back up and keep it up, but there is still no sense of doing more than the bare minimum.

The Governor foreshadowed in his press conference an interesting issue of the Bulletin due out next week on the results of stress-testing of the dairy books of the five largest banks.  I will no doubt write about that in more detail then, but the scenario apparently involved three more seasons of a payout of around current levels, resulting inter alia in around a 40 per cent fall in dairy farm prices.  On that scenario, 44 per cent of dairy debt would be impaired, and 10-15 per cent would be in default.   If we assumed a loss given default of perhaps 50 per cent of the loan, the banking system could face losses of several billion dollars over a period of several years (especially once losses on other commercial lending associated with dairy regions were factored in) That is a lot of money, but it would not threaten the soundness of the banking system –  the capital of the banking system, at last report, was almost $36 billion, well above regulatory minima, and banks have several years to replenish any losses through other retained earnings or –  at a pinch –  by direct recapitalization from the parents.   It might seem not-very-extreme to do a stress test based on a continuation of the current payout, but equally it is difficult (although not impossible)  to believe that the exchange rate would remain anywhere around current levels if international dairy prices remained at current levels for the next few years.

Penultimately, the next time the Governor or the Minister of Finance tells you the economy has been moving along just fine, it might be worth digging out this chart from the MPS. 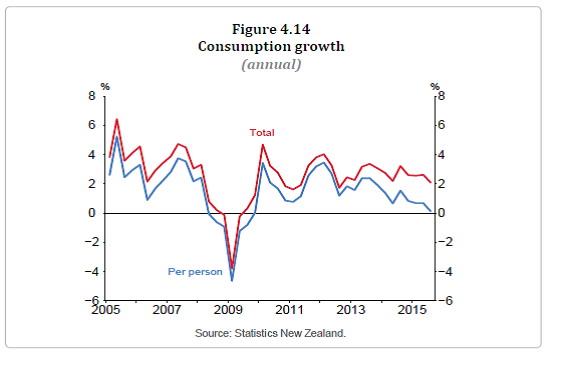 Consumption per capita showing almost zero growth over the most recent year isn’t an encouraging story.  As economists will tell you, the assumed purpose of economic life is to consume.

And finally, as I have noted to them, the Reserve Bank might want look to the security of its systems.  I had an email out of the blue at around 8 this morning-  most definitely not from someone in the Bank –  telling me that the sender had just heard that the OCR was to be cut by 25 basis points.  I have no way of knowing if it was the fruit of a leak, or just inspired speculation, and was relieved to see the foreign exchange markets weren’t moving, but it wasn’t a good look.