Recall that articles in the Bulletin carry the imprimatur of the Governor – they speak for the Bank, and aren’t just the views of the authors.  But this short one must do even more than most given that (a) it is directly about the conduct of monetary policy, the Bank’s primary function, and (b) that John McDermott, head of the Economics Department, is himself one of the co-authors.

There is also a slightly eerie detachment from the real world about the article.

The authors don’t take the opportunity to illustrate whether inflation expectations matter at all, or (more specifically) whether the measures of inflation expectations they use actually affect economic behaviour of firms or households.  There are many confident statements throughout the article about how inflation expectations “will” or “do” affect various things, and they are all true within a particular model, but the authors don’t show that they reflect real-life economic behavior.    For example, the notion that expectations of future inflation might affect wage-setting sounds plausible, but it is no more plausible than the notion that employers and employees mostly have in mind the most recent trend in past inflation.  If you pushed them on it, they might well respond “well, specialist economic forecasters can’t forecast inflation remotely well, so a rule of thumb based on past trends seems better for everyone in normal circumstances”.   The same logic could easily be applied to implicit calculations of real interest rates.  Perhaps further empirical work from the Bank will shed light on all this?

Strangely, in the entire article there was also no discussion of the length of nominal contracts.  As I’ve pointed out previously, expectations of inflation 20 years hence are very unlikely to affect much economic behavior today, and are certainly unlikely to influence inflation outcomes today.  There are simply very few nominal contracts fixed for that length of time, or indeed for anything much beyond one to two years.  So if the Bank believes that some concept of inflation expectations is affecting demand and pricing now, surely it has to be expectations about the horizons over which people are entering nominal contracts?  Most wages and prices are reviewed at least annually, and not many interest rates are fixed for much longer than two years.  These details matter.

And yet in the Bank’s material they are glided over.  Here is some text from early in the article

One important aspect is the influence that inflation expectations will have on wage- and price-setting behaviour at horizons relevant for forecasting inflation and setting monetary policy.

The first paragraph on its own is fine –  although note the “will”, where “might” or “can” might better capture the uncertainty.  It is focused, it appears, on the one to two ahead horizon, which both captures the sorts of horizons over which nominal contracts are made, and the horizon over which monetary policy influences things.

But then things start getting muddled.  They introduce this concept of inflation expectations being “well anchored” –  which got a lot of attention in the MPS last week – but here they aren’t talking about expectations over the horizons of price-setters, and monetary policymakers, but out into the far future –  “long-term expectations”.   Not content with drawing the distinction, they then seek to loop back later in the paragraph to the potential disruption to current wage and price-setting behavior.  But surely if there were problems affect the current situation they would show up in the measures of expectations over a one to two year horizon?

But how much content is there to this focus on long-term expectations, as anything of relevance to current monetary policy?  My answer: not a lot.    The Reserve Bank focuses on survey-based measures.  There are quite a few longer-term survey questions, but (a) the Bank simply ignores surveys of households in its modelling, (b) there are no longer-term surveys of businesses, which (c) means that the survey measures of inflation expectations they use are all those of the same small group of economists.

As I’ve noted previously, if forced to write down my expectation for inflation in 10 years time I might well write down 2 per cent.  Why?  Well, it would have nothing whatever to do with my confidence, or otherwise, in Graeme Wheeler or John McDermott. They are unlikely to be in the same job 10 years hence, and we will have had several PTA renewals and elections before then.  I’d write down 2 per cent –  with quite wide confidence bands, and relief that nothing depended on the answer –  just because the wider world has not yet confidently settled on a target any different than 2 per cent.  If instead I wrote down 3 per cent it still wouldn’t reflect badly on Wheeler and McDermott who have to operate with the current PTA –  it might simply be a prediction that eventually central banks and governments might decide that higher targets are safer, in the presence of the near-zero lower bound.  The Bank uses these long-term measures,(and the average of them, the “perceived target focus”) as follows:

If this measure is close to the official inflation target mid-point, this suggests the public see the Bank’s projections as credible

But this seems hard to take seriously.  The Bank’s projections cover the next couple of years. The long-term measures are about periods five or ten years hence. And they don’t even get information from “the public” –  just from a handful of economists.  The current PTA won’t be in place five to ten years hence –  indeed, most of the Opposition political parties want to have changed the framework by then –  and most probably neither will the current monetary policy decision makers.

I like lots of data, and the more surveys the better tended to be my mantra.  But there is, essentially, nothing in the long-term survey-based measures that is of any relevance to day-to-day monetary policy setting or to assessments of how well, or otherwise, the Bank is doing its job.   Expectations that far ahead, even if they were real expectations of firms and households transacting, simply don’t affect inflation today, and nor –  except perhaps in extremis –  do they provide any useful information about whether current monetary policymakers are doing their job.  The Bank really shouldn’t be taking any comfort from those surveys –  perhaps especially given that the same economists have over-predicted inflation in recent years even more than the Reserve Bank itself did.

Market-based measures are a little different.  We have limited information of this sort in New Zealand, but the gap between indexed and conventional government bonds is an implicit (if imprecise) measure of expectations.  These implicit expectations are an average expectation for the next 10 years –  different, say, than expectations for inflation 10 years hence.  At present, the implicit expectation is about 1 per cent.  Such long-term implicit expectations don’t much affect day-to-day price or wage-setting now, but at least they involve people putting their own money at stake.   They tell us something about which longer-term risks markets are currently more worried about  –  and not just in New Zealand but in various other countries, at present that is about the risk of longer-term inflation persistently undershooting targets.

The Reserve Bank really should be much more concerned about the outlook over the next one to two years, the period its decisions today are affecting.  And here the article becomes much more sobering

Remember that these are the shorter-term expectations, over the one to two year horizon, they are now talking about.

We shouldn’t be surprised that expectations measures have become more adaptive (backward looking) recently.  Inflation has been persistently below target for several years now.  The Reserve Bank, and private forecasters, have persistently told us that inflation would soon be back to target, but it just hasn’t happened.  The Reserve Bank seems to slowly be waking up to the fact that these persistent forecast errors might matter.

But it is striking how the explain it

The time to target has increased recently (figure 4). Low actual inflation outturns have likely driven this decline. Low inflation outturns reflect a number of factors, including global spare capacity, an elevated exchange rate, a sharp drop in oil prices, and a significant fall in dairy prices

Notice the striking omission from the list.  There is no sense in that list that monetary policy errors, even if only with the benefit of hindsight, might have played any part in the repeated undershoot of the target, and the way it now appears to be affecting inflation expectations measures.  Inflation outcomes, over time, in countries where the central bank has full policy flexibility, are the result of monetary policy choices.  It is really as simple as that.  Sometimes central banks face pressures that are hard to recognize and take account of soon enough, but their claim to autonomy is that they are the technical experts. Over the last few years our technical experts have let us down.

As the BNZ points out in its commentary, headline inflation is likely to stay low over at least the next few quarters,  It seems highly likely that survey measures of short-term (1 to 2 year ahead) inflation expectations will fall further, even if there is no further decline in core inflation (however defined).   BNZ worries that that will lead to the Bank over-easing, driven (in effect) by the impact of oil prices on headline inflation.  My worry is different.  The Bank has been continually behind the game, probably for at least the last 2.5 years.  To deliver future inflation near 2 per cent in a reasonably timely manner, the OCR should still be materially lower than it is now.  If drops in inflation expectations surveys are finally what get them over the line, then I’m thankful for small mercies –  that they eventually get there –  but by hanging so much on survey-based inflation expectations measures, especially longer-term ones, without any evidence that these measures are playing an independent role in the inflation process, they simply postpone to the last possible date responding to the evidence of low core inflation that they already have.

And here is the median of those six series the Bank has identified. 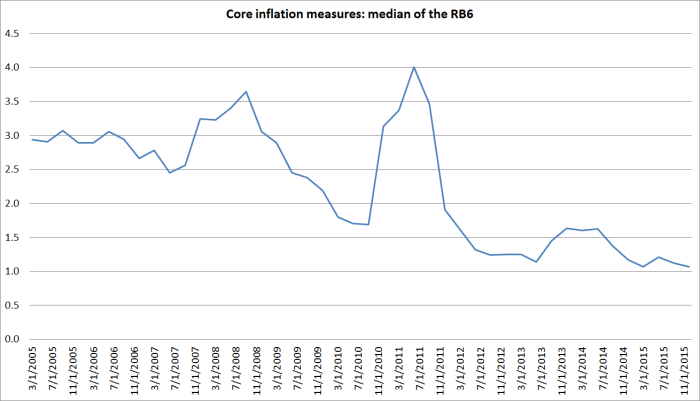 Add in the market-based measure of inflation expectations, also currently around 1 per cent (and not having risen since the Bank began cutting the OCR), and it is a pretty clear basis for material further reductions in the OCR.

If the Bank is really worried as they seem in the article about this whole de-anchoring risk, perhaps they should treat it as the basis for a more pro-active use of policy now, to minimize the risk of further inflation undershoots and having to face a higher cost of re-anchoring expectations than in the past.

The Bank rightly points out that

And yet it seems oblivious to the facts that:

And, of course, the Governor apparently expected the full OCR cut to be passed into lower retail rates. Unsurprisingly that hasn’t happened, so that real retail rates –  the rates firms and households face – are providing even less relief, and less support for a pick-up in inflation.