My post yesterday about the Prime Minister’s immigration interview at the weekend prompted a few comments from people keen to pin the responsibility for the current policy on John Key and offering thoughts on what electoral motives National might have for favouring high rates of non-citizen immigration.

Now, of course, any incumbent government (especially one that has held office for more than seven years) must accept some responsibility for current policies.  Especially on matters that don’t require legislation, if they didn’t like the current policy, they could have changed it.

But, as I’ve pointed out on various occasions, current policy is not some bold new innovation of the current government.  It is, more or less, a continuation of the policies of previous governments since at least the start of the 1990s.  A couple of weeks ago, I linked to the 2014 immigration policies of the various smaller parties, not one of which suggested any material disquiet with the regime. (I didn’t link to the 2014 Labour policy, and they now appear to have taken down their 2014 policies, but here is a 2014 summary of the various party immigration policies. Labour seemed then to favour more use of immigration policy in a counter-cyclical way, but there is no obvious disquiet with the overall target levels.) 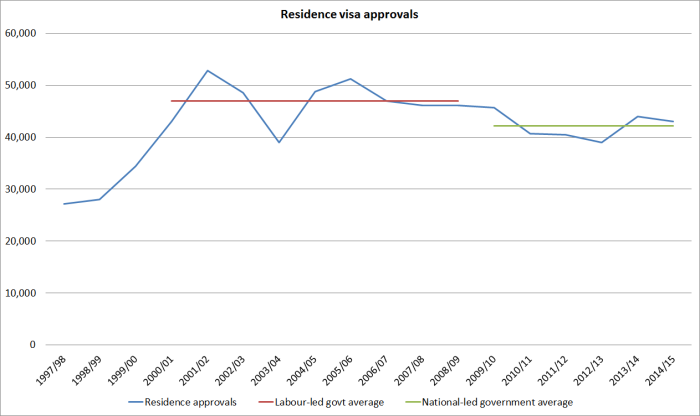 The target number of approvals (45000 to 50000 per annum) has not changed from one government to the other, and the average number of residence approvals has actually been slightly lower under the current government than it was under the previous government (probably largely reflecting the fact that labour market conditions have been more difficult in recent years).  As the population is now 20 per cent larger than it was in 2000, annual residence approvals as a share of the existing population are now quite a bit lower than they were back then (albeit still very high by international standards – roughly three times, per capita, legal immigration to the United States).

There have been plenty of refinements of policies over time –  some for the better, others not.  We’ve had changes in the eligibility for parent visas, changes in the points offered for people moving to places other than Auckland, and an increased orientation in granting entry to people with specific job offers (an approach criticized – I think rightly – in the new Fry and Glass book).  But the overall approach to residence approvals has had much more continuity than difference from one government to the next.  And only people who get a residence visa can stay here permanently.

What of some of the other visa types?  Foreign students are a reasonably significant export market, and if there has been some (material) change in policy over the granting work rights to longer-term students while they are here, overall student visa numbers haven’t changed much from one government to the other. 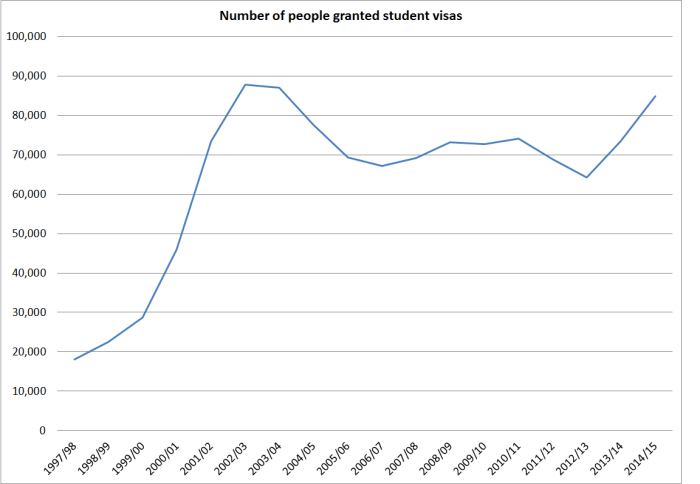 Ideally, one might have hoped that we’d be seeing more students than 10-15 years ago, but mediocre universities and a high exchange rate are obstacles to that. 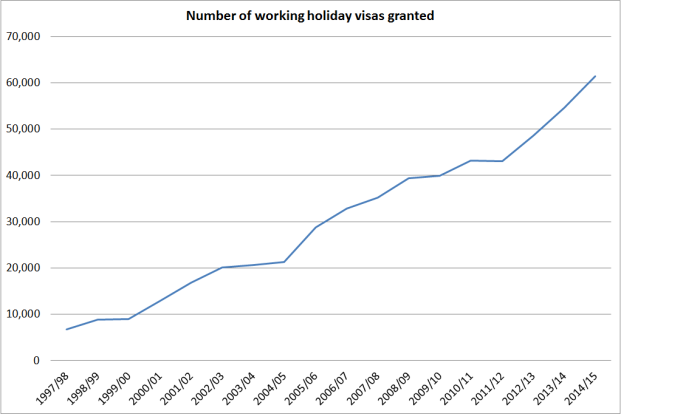 But (a) if you didn’t know the dates of the change of government, you couldn’t tell from the chart, and (b) much of the more recent expansion of working holiday programmes seems to have been in pursuit of votes for the Security Council seat, a goal shared and pursued by both main parties.  Moreover, although 60000 visas were granted last year, these people are typically only in New Zealand for a few months.  I don’t have any strong views on working holiday schemes, although in papers released last year, even Treasury expressed some unease.

The number of people granted work visas has also trended up very strongly –  most strongly when the unemployment was very low –  over the period since 1997/98. 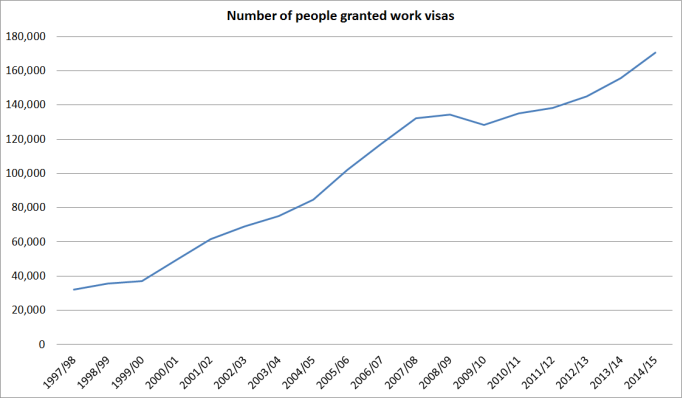 But again, there is no obvious difference between the experiences under National and Labour led governments.  Much of the trend reflects the change of approach under which most people who obtain residence visas do so from within New Zealand. In the 1990s, most people who got residence visas did so directly from abroad, but now the most common model is for someone to come on a work (or student) visas, get established in a specific job here, and then apply for a residence visa.  That aids the integration of the people who do come but, as Fry and Glass note, may not help attract the very best people.

The point of this post so far has been to illustrate the substantial continuity, and commonality of approach, from one government to the next.

But on the off chance that anyone thinks ‘but Winston is different’, recall that Winston Peters was Deputy Prime Minister and Treasurer in the National-New Zealand First government from 1996 to 1998, and was Foreign Minister in the Labour-led government of 2005 to 2008.

I tracked down a copy of the (very long) 1996 coalition agreement between National and New Zealand First.  Immigration policy is dealt with on page 45. Here is what it said:

Statement of General Direction:
The goal is to have an immigration policy that reflects New Zealand’s needs in terms of skills, ability of the community to absorb in relation to infrastructure and recognising the diversity of the current New Zealand population. Such a policy will take into account the capacity of this nation to meet the general economic and social needs of New Zealanders.

To maintain current immigration flows as per the last quarter of 1996 until the Population Conference has been held in May 1997.

Whatever you make of the specifics, it doesn’t have the ring of something dramatically different from what had gone before (or what came after).  (And for those of a historical bent, here is the programme –  with comments from the then Prime Minister and the then Minister of Immigration –  for that Population Conference.)

By 2005, confidence and supply agreements were rather shorter, but this is what the Labour-New Zealand First agreement said about immigration

• Conduct a full review of immigration legislation and administrative practices within the immigration service, to ensure the system meets the needs of New Zealand in the 21st century and has appropriate mechanisms for ensuring the system is not susceptible to fraud or other abuse, and taking note of other items raised by New Zealand First.

Again, not suggesting any very material changes of policy.

Of course, minority parties have to prioritise.  My point is only that over 25 years in practice our high levels of inward non-citizen migration have been the result of a widely-shared consensus among our political parties (and bureaucrats). Some might have been zealous for it, and others just not that bothered.  Perhaps that outcome has been a good thing, leading to real economic gains, or perhaps not (it would nice if the advocates could show us the evidence of those gains), but it certainly isn’t a Key innovation.

I had not been going to write any more now about the Reserve Bank’s investigation into the possible OCR leak (I voluntarily passed them hard but partial information; what conclusions they are able to draw from that information is up to them)  and the related, more important, issues of how they handle releases, lock-ups etc.  But overnight Marek Petrus, former communications director at the Czech central bank, got in touch and drew my attention to a couple of posts on the issue which he had put on his own very interesting blog, Lombard Rates.  He has also left a substantial comment on my earlier post on reforming Reserve Bank releases.

Based on my experience, organizing lock-ups for interest rate-decision releases is not a standard, wide-spread practice among central banks.

As far as I know, few central banks provide information on rate decisions under embargo, be it via lock-ups or other means (the Czech National Bank, where I set up that lock-up regime for news agencies some years ago, is one of those few).

Still, lock-ups do make sense, but mostly for technical, complex matters that require a lot of explanation (a specific example is releasing Inflation Reports or Financial Stability Reports). Providing information on a rate decision and the main reasons behind such decision under an embargo longer than, say, 5-10 minutes is not worth the risk.

My suggestion for the RBNZ, or any central bank considering ways to employ or redesign an embargo technique, would be to organize the standard lock-ups only to provide detailed explanations on complex publications or complicated technical, regulatory matters. The most market sensitive information (such as the rate announcement) should either be released under no embargo at all, or be made available to a small group of journalists via a tight, 10-15 minute lock-up. That would help reporters get the facts right and avoid making a factual error under stress.

No market participant or analyst should have access to this sensitive kind of information before the official release. That to me is the first line of defense against an embarrassing information leak. Afterwards, an open press conference could be held for journalists and TV cameras, and a separate background seminar organized for analysts, to explain the decision and answer detailed questions. However, this press conference and the background seminar are, as rule held, only after a rate decision has been published, and has thus become part of public domain.

I agree with the gist of these comments, although I’m not sure about holding background briefings for analysts after the release.  When we first did Monetary Policy Statements in New Zealand we did exactly that, but the sessions were not popular (clients wanted immediate explanations, and after that the market economists wanted to move on to other things).  Perhaps more importantly, comments on the monetary policy outlook and projections should be made openly and on-the-record or not at all.

UPDATE: Petrus has got in touch to clarify what he meant about an analysts’ briefing:

I did not mean to suggest that a seminar for analysts should be organised behind closed doors (i.e. only on background).

Quite the opposite: It should be made public, streamed live as a video webcast and later made available online as a video recording. By writing about “background seminar”, I meant to say that background and detailed information about a policy decision and the latest forecast should be routinely provided by a central bank via such analyst meetings.

The most transparent central banks, such as Sweden’s Riksbank and the Czech National Bank, make such analyst meetings public by providing a live webcast and making the video recording available via online services such as YouTube for every member of the public to watch.

That would appear to be an excellent approach for our Reserve Bank to consider adopting.