In a post on Thursday I showed this chart, a rough and ready decomposition (pioneered by the IMF) of real GDP per capita into that produced by tradables sectors (bits exposed to competition from the rest of the world) and non-tradables sectors.  My proposition was that successful high-performing economies will usually be led by strong tradables sector growth.

I was curious about how the comparable chart would look for Australia. 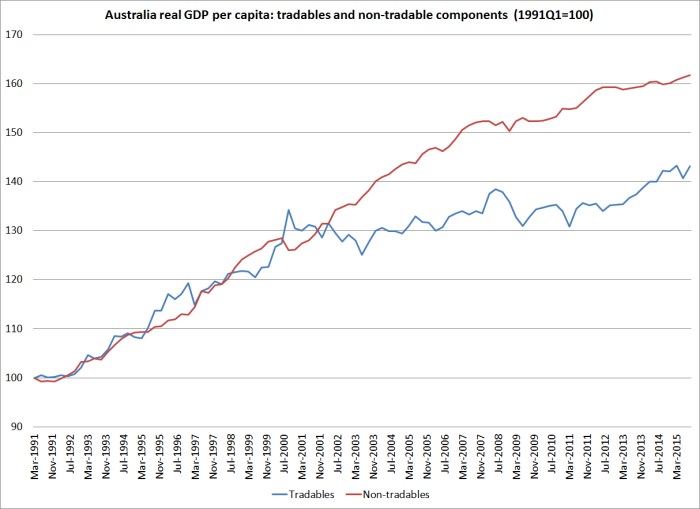 Total growth in non-tradables per capita has been almost identical in the two countries over these 25 years (around a 60 per cent increase).

But look at the differences in recent years in (this proxy for) tradables sector output, per capita.

In New Zealand, (this proxy for) tradables sector output per capita hasn’t increased over 15 years (notwithstanding the strong last few quarters).  In Australia –  which certainly isn’t a stellar economy –  the picture is much less negative.

At a sub-sectoral level, manufacturing output in Australia (per capita) has been even weaker than in New Zealand over the full quarter century.  The big difference, of course,  is simply the rapid growth in mining output.

Some readers perhaps find this blog a fairly unremitting critique of the Reserve Bank of New Zealand.  But today I’m sticking up for them.

Independent economist Shamubeel Eaqub has a column in today’s Dominion-Post, which in the hard copy version runs under the heading “Gorging a warm-up act for debt horror show”.   And “gorging” is Eaqub’s word, not just some sub-editors hype.   According to Eaqub, all New Zealand’s debt chickens are about to come home to roost –  notwithstanding, apparently, the fact that debt/GDP ratios are little changed over the last eght or nine years, and that no one has any good sense of what a sustainable, optimal, or equilibrium level of such ratios might be.

The Reserve Bank is complicit, as they regulate banks. They say that the banking sector is not at risk. Their modelling shows sufficient capital buffers – which influence banks’ risk appetite to lend and vulnerability in a recession.

Their modelling has also shown higher inflation and interest rates for the last seven years – mistakenly.

This is really just a “guilt by association” slur.  Yes, the Reserve Bank has got its inflation and interest rate forecasts badly and repeatedly wrong, but what possible connection does that have to the question of whether banks hold adequate capital (whether risk weights, or required capital ratios)?    Or whether the stress test results are plausible?  Eaqub produces precisely no evidence to support his insinuations.  It is a short column to be sure, but surely he could at least offer readers a hint.

Lets recall that the stress tests involved a 40 per cent fall in house prices across the country, and something like a 50 per cent fall in Auckland.  And they involved an increase in the unemployment rate larger than any seen in any advanced economy with a floating exchange rate since World War Two.  And the banks still looked pretty resilient.

And as the IMF has previously noted, when they looked at a variety of other countries, risk weights on housing lending in New Zealand were materially higher than those in other countries.

I suspect there are tough times ahead for the New Zealand and world economy.  One can always argue for more capital, but to do so from the current situation  –  where New Zealand banks are better-capitalized than most –  one really needs more than simply the claim that “they got monetary policy wrong, so we shouldn’t give them credence on any other score”.