In two successive days last week, two heads of central banks gave speeches on monetary policy.   Graeme Wheeler’s speech was characterized by a rather desperate defensiveness –  attacking nameless critics for views that no one seems to hold, in an attempt to defend his (and the Bank’s) rather poor track record: a CPI inflation rate that hasn’t been at the midpoint of the target range for four years.

A commenter pointed me to ECB head Mario Draghi’s speech, given the following day, “How central banks meet the challenge of low inflation” .   It isn’t a perfect speech by any means –  the claim that “monetary integration in the euro area is both complete and secure” must just be one of those lines he has to use, regardless of the continuing severe stresses on the system.  It is a speech of two halves –  the second half is about the particular challenges of the euro area, but the first half is an excellent and authoritative discussion of how central banks generally should respond to low inflation.

Draghi’s speech is well worth reading.  It is the speech of someone who has a deep belief in the power of monetary policy – that inflation is, over time, a monetary phenomenon, and that if inflation is persistently below whatever goal is set for the central bank it is the central bank’s responsibility to do something about it.    It is a refreshing speech, especially as the ECB is no doubt closer than it would like to the limits of conventional monetary policy (with the policy rate already below zero).    Draghi could have offered excuses, but instead it is robust call for monetary policy to simply do its job.

Draghi draws on the lessons of the 1970s, when central bankers often wanted to shift the responsibility for high inflation onto other structural forces.  He fully recognizes the wide range of shocks than can hit an economy (demography, technology etc), and the way some of them can persist, but  argues that monetary policy authorities are responsible for offsetting the effects of those shocks on inflation –  whether they are pushing upwards (as in the 1970s) or downwards (as at present).

… in a context of prolonged low inflation, monetary policy cannot be relaxed about a succession of supply shocks. Adopting a wait-and-see attitude and extending the policy horizon brings with it risks: namely a lasting de-anchoring of expectations leading to persistently weaker inflation. And if that were to happen, we would need a much more accommodative monetary policy to reverse it. Seen from that perspective, the risks of acting too late outweigh the risks of acting too early.

In sum, even when faced with protracted global shocks, it is still monetary policy that determines medium-term price stability. If we do not “surrender” to low inflation – and we certainly do not – in the steady state it will return to levels consistent with our objective. If on the other hand we capitulate to “inexorable disinflationary forces”, or invoke long periods of transition for inflation to come down, we will in fact only perpetuate disinflation.

This is the clear lesson of monetary history, especially the experience of the 1970s.

Nor does he offer up excuses of the sort that “inflation is low everywhere, so there isn’t much we can –  or perhaps should –  do about it”.

We now have plenty of evidence that, if we have the will to meet our objective, we have the instruments.

He even deals with the line of argument that easing monetary policy to get inflation back to target may do more harm than good.

Still, there are some that argue that even if central banks can lean against global disinflationary forces, in doing so they do more harm than good. In particular, expansionary monetary policies at home lead to the accumulation of excessive foreign currency debt or asset price bubbles abroad, especially in emerging markets. And when these financial imbalances eventually unwind, it weakens global growth and only adds to global disinflation.

To which his response is:

In fact, when central banks have pursued the alternative course – i.e. an unduly tight monetary policy in a nascent recovery – the track record has not been encouraging. Famously, the Fed began raising reserve requirements in 1936-37, partially due to fear of a renewed stock bubble, but had to reverse course the next year as the economy fell back into recession. That has also been the experience of some central banks in recent years: raising rates to offset financial stability risks has undermined the primary mandate, and ultimately required rates to stay lower for longer.

This suggests that the so-called “assignment problem” between monetary policy and financial stability at the domestic level should also apply at the global level. Monetary policy should not try to balance opposing objectives: it is optimal for all parties if it delivers its mandate. And if that creates financial stability concerns, they need to be addressed by other policies more suited to the task. And in fact there are several policy levers available.

That is the sort of speech that Graeme Wheeler should have been giving last week – indeed, given how badly inflation has been undershooting the Reserve Bank’s target, he should have been giving it a year or two ago.  Instead, he drove up interest rates –  when his preferred measure of core inflation was even lower than it is now.  And even now that the OCR increases have reluctantly been fully reversed, we are left with real interest rates that are higher than they were two years ago, even as confidence in inflation getting back to target erodes further (and the terms of trade have fallen, the peak impulse from Christchurch has passed, and the global situation has materially worsened).

Chris Green, at First New Zealand Capital, had a commentary out late last week on the Governor’s speech.  I agreed with almost all of it.  But two lines particularly caught my eye:

“The perception that they give of a reasonably high hurdle before cutting rates would be more consistent with CPI out-turns around the top of the band, not having been below the midpoint for more than 5 years [I presume he means on the Bank’s preferred core measure] and not projected to get back there until the December quarter of 2017 –  at the earliest”.

Quite.   And one could add that the problem is compounded by the Governor’s reluctance to substantively engage with the issues –  rather than responding to straw men of his own imagining –  or indeed to open himself to sustained scrutiny from the media.

The Governor and his chief economist have been putting a lot of weight on inflation expectations measures recently, and suggesting that there is really nothing to worry about.  We’ll have a new round of inflation expectations data shortly, and I’ll come back to the topic then, but for now consider this chart, drawn from the Bank’s survey of household expectations. 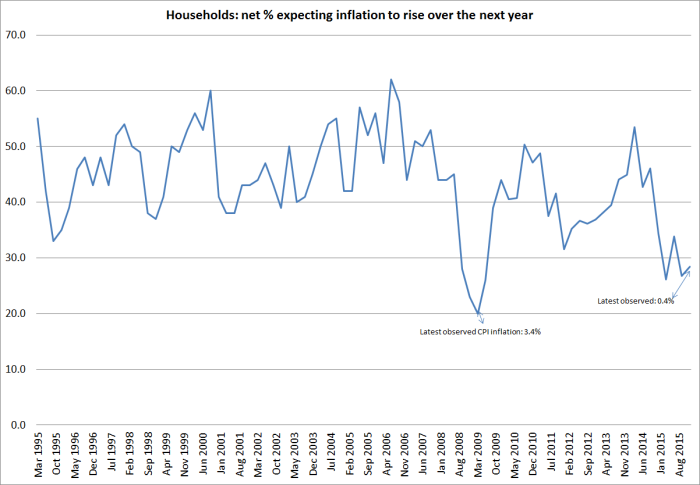 People are asked whether they expect inflation to rise, fall or stay the same over the coming year.  The survey has been running for over 20 years, and in every single survey a net balance have reported expecting inflation to increase (suggesting that not much weight should be put on the absolute numerical value of the answer).  But what I wanted to highlight is that at present fewer people expect inflation to rise than at any time in the history of the series, with the exception of the depths of the recession in 2008/09.    But in March 2009, when only 20 per cent people expected inflation to rise over the coming year, the last annual inflation rate they’d seen was 3.4 per cent.  Of course –  in the middle of a recession, with plummeting oil prices –  they didn’t expect inflation to rise.  And they were right.  Annual inflation fell sharply.    The most recent observation in the survey was November 2015.  When those respondents completed the survey, the most recent annual inflation rate they’d seen was 0.4 per cent.  And still, not many (by historical standards) expected annual inflation to rise.   There is nothing to be complacent about in the inflation expectations data –  and even among more expert observers, medium-term inflation expectations are lower, relative to the target midpoint, than they have been since inflation targeting began.

It must almost be time for the Minister of Finance’s annual letter of expectations to the Governor.  As I noted last year, the persistent undershoot of the target has had little or no attention in  past year’s letters.  We must hope that this year’s is different.  The primary responsibility for the persistent undershoot of the target rests with the Governor, his chief economist, and his other senior advisers.  But the apparent passivity to date of those charged with holding the Governor to account –  the Minister of Finance, who set the target, and the Bank’s Board, paid to monitor the Governor’s pursuit of the target –  risks making them complicit in the failure.  After all, together they were responsible for the appointment of an individual as Governor who increasingly seems to lack the stature and qualities that the position demands.