Implicit in much of the discussion around an appropriate immigration policy for New Zealand is a sense that our prospects would be better if only New Zealand had more people. Some have come out and actively argued the case – see, for example, this brief note from the NZIER last year.

I’ve long been fairly sceptical of that proposition. A casual glance around the world suggests no very obvious relationship. The United States and Iceland co-exist, and Japan and Singapore. At the other ends of the income spectrum, India and Bhutan, and Brazil and Costa Rica. There are all sorts of arguments advanced around the economics of agglomeration, and that analysis seems to work quite well in describing what happens within countries. But it does much less well in describing economic performance across countries. And as I’ve pointed out to people previously, if the real economic opportunities in big countries were so much superior to those in small countries, large countries would tend to have (more high-yielding projects and) higher real interest rates than small countries. But they don’t.

Angus Maddison put together the most widely-used longer-term estimates of GDP per capita for a wide range of countries. There are plenty of holes that can be poked in those estimates, but they are what we have.   He produced estimates for a large number of countries for 1913, just before the disruption and destruction of World War One, and as he died a few years ago his last numbers were for 2008.

This chart shows per capita real GDP growth from 1913 to 2008 for the sixty or so countries Maddison had estimates for, plotted against the level of the population of each country in 1960 (roughly half way through his period). 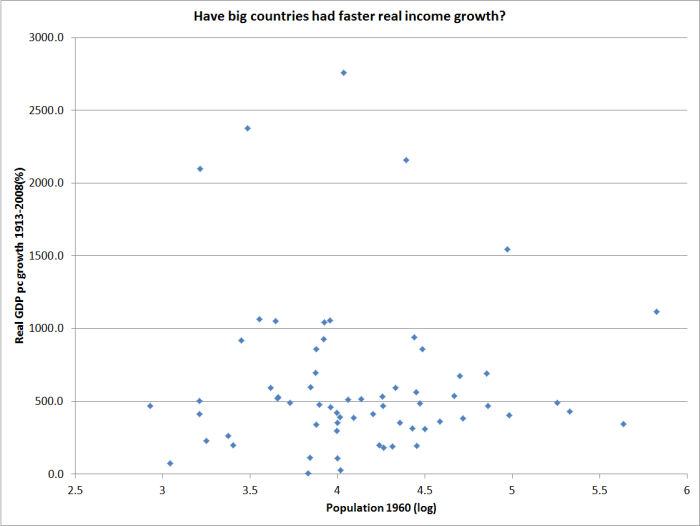 What about more recent periods? The Conference Board has built on Maddison’s work and has estimates for a wider range of variables for more recent decades.  One argument – advanced in a New Zealand context by Phil McCann – is that size has become a much more important issue for advanced countries in the last few decades. If so, perhaps we might have expected to see big countries growing faster than small countries over that period.

Here are two charts that look at that relationship for 33 advanced economies.

The first shows the relationship between the (logged) level of population in 1990 and growth in real per capita GDP growth since 1990. 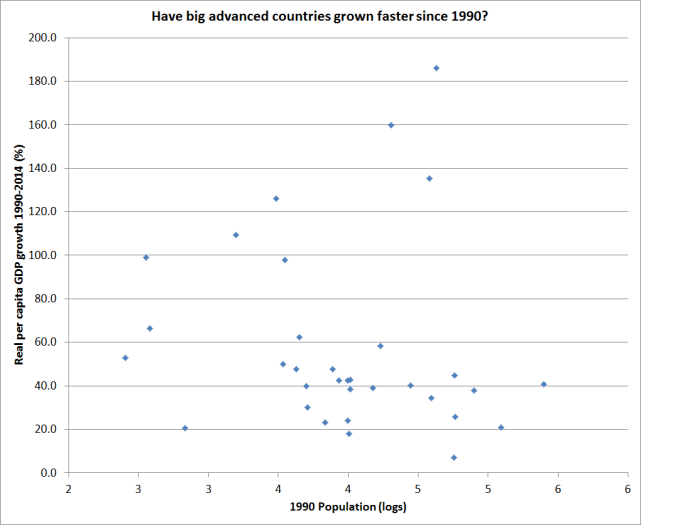 And the second shows the relationship between the (logged) level of total hours worked in 1990 and growth in real GDP per hour worked since 1990. 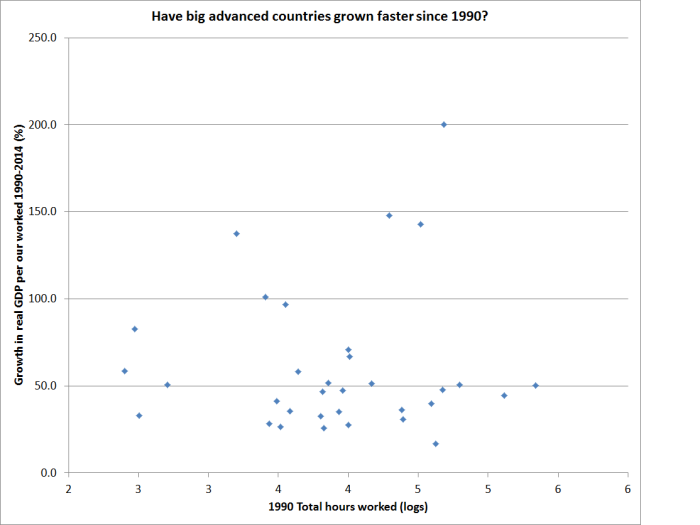 In neither case, is there any sign of a positive relationship.

Charts of this sort are, of course, not conclusive. Lots of other things are going on in each country.  In an ideal world, one would want a much fuller and formal modelling of the determinants of growth. But equally, the absence of a positive relationship between the size of the country and its subsequent growth shouldn’t be surprising, and there have been previous formal research results suggesting a negative relationship.

Of course, perhaps New Zealand is an exception. Perhaps real per capita incomes would really be materially lifted if we had many more people here, even though there has been no such relationship across the wider range of advanced countries in history.  But in a sense we have been trying that strategy for 100 years and there is no sign that it has worked so far.   Very few relatively advanced countries have had weaker real per capita growth than New Zealand in the last 100 years (only places like Argentina and Rumania).

Perhaps the next 25 or 100 years would be different. But I think the onus is now on the advocates of policies to bring about a bigger and more populous New Zealand to demonstrate where and how the gains to New Zealanders from a much larger population are occurring?  Recall that all our population growth now is resulting from government policy choices – the level of non-citizen immigration that the New Zealand government is targeting. If population growth were being driven by the private choices of New Zealanders (higher birth rates, or a permanent reversal of the New Zealand diaspora), I wouldn’t regard it as a particular matter of policy interest. But when our governments are actively targeting a larger population the onus is surely on them to demonstrate the real economic gains to New Zealanders. 25 years on in the current strategy there is no sign of them yet.

One could make a case that New Zealand’s greatest asset is the fertile land and temperate climate.  Refrigeration and much reduced shipping costs in the late 19th century gave those natural resources real economic value.  But there has been no comparable “shock” for the last hundred years, and arguably we are simply spreading those natural resource “rents” over more and more people.  Norway would be unlikely to have the highest real GDP per capita in Europe if they had responded to the discovery of vast oil and gas resources by doubling their population.

Natural resources alone don’t make a country rich (see Iran or Zambia), and natural resources aren’t the only way to get rich (see Singapore or Taiwan) but for a very isolated country they may well, in conjunction with strong institutions and competitive markets, provide the best possible basis for re-establishing top tier living standards for a small population.  So far, adding lots more people doesn’t seem to have helped.

Talking of which, it is now 21 August and there is still no sign of an MBIE response to my 28 May request for copies of advice to ministers on the economic impact of immigration, and on the permanent residence approvals target.