I watched Q&A’s interview yesterday with Minister of Economic Development, Steven Joyce. He was resolutely upbeat, rather beyond the point where his case could be taken entirely seriously.

The Minister tried to reassure us by observing  that he’d taken a look at New Zealand’s previous four recessions and we weren’t facing anything like that. In particular, he assured us, the world economy was different.

I’m not sure which recessions the Minister had in mind. But here is the chart of six-monthly growth in real GDP back to the start of the official series. Six-monthly because of the popular lay definition of a recession as two consecutive negative quarters of GDP growth. It has never been entirely clear why that measure enjoys such popularity. Apart from anything else, it means something quite different in all those European countries or Japan with flat or falling populations than it does in, say, New Zealand, with 1.9 per cent estimated population growth in the last year. Two quarters of zero or negative GDP growth in New Zealand is a quite material hit to per capita GDP.

My first observation about past recessions, or marked growth slowdowns, is that they almost always take officials (and probably ministers) by surprise. I reflect sadly on having been in policy/analysis roles in the Reserve Bank in each of the episodes in this chart where growth got to zero or negative. I’m pretty sure we didn’t expect or anticipate a single one of them. To take just the most recent examples:

But you could go through published material from the Bank around each of these episodes and the story will be much the same. And I’m not trying to pick on the Bank. I’m pretty sure Treasury’s record would have been no better, and nor (consistently) would that of any of the market forecasters/economists. There would be nothing very unusual if, by the time the September or December national accounts numbers came out, it turned out that real GDP had been going backwards for some time, even as ministers and senior officials had been running the usual upbeat story.

My second observation is that while severe world downturns are bad for New Zealand, we haven’t needed global recessions to have a downturn in New Zealand. Our 1991 recession and our 2008/09 recession were part of common global (or advanced country) events, but our 2010 double-dip recession, our 1997/98 recession, and our 1988 recession were largely home-grown. The Minister wanted to take comfort from the state of the world economy, but I’m not sure why.   World growth rate estimates are no better than mediocre, and they rest on estimates of China’s growth which few people now take seriously. Growth in many other emerging market countries has been slowing, as their credit-booms exhausted themselves, and there is no sign of acceleration in the anaemic growth in most of advanced world. Commodity prices have been falling very sharply, and monetary authorities in many countries have been easing policy in the last 18 months. Perhaps the US Federal Reserve will raise interest rates next month, but if so it seems to be as much as response to the siren call of getting back to (questionable estimates of) a neutral interest rate, rather than because demand growth is putting much upward pressure on inflation.

There has been plenty of talk of New Zealand maintaining growth at around 2 or 2.5 per cent. But remember that in the last six months for which we have official data, real GDP rose by only 0.8 per cent. And that was the six months to March, when sentiment was still pretty upbeat, employment was growing strongly, and so on.   It is hard to believe that “true” growth in the rest of this year – and we are now half way from March to the end of the year – will have been stronger than it was in the six months to March. If it is only as strong, that produces an annual growth rate of not much more than 1.5 per cent. With building activity starting to go sideways, unemployment rising, and consumer and business sentiment down – and as the sharp fall in the terms of trade has grabbed the consciousness of many people – a much safer bet would seem to be lower growth. It isn’t clear to me why, say, one would bet on an average of anything more than zero growth for the next few quarters.

There has been talk of the “automatic stabilisers” working. Perhaps, but lets look at them. Fiscal automatic stabilisers are not particularly strong in New Zealand – which just reflects the fact that our maximum marginal tax rates are low, and our unemployment benefits are modest and at a fixed rate. Interest rates are falling, but they probably shouldn’t have been raised last year, and so far only half the increase in the OCR has been unwound. As I’ve noted previously, by the standards of past cycles in short-term interest rates, even a cut in the OCR to, say, 2 per cent by early next year would not be remotely aggressive.   And it is quite possible that medium-term inflation expectations are still falling – there have been suggestions of that from the bond market, for example. If so, real interest rates aren’t falling much at all.

And, of course, the exchange rate has fallen. As I noted last week, the fall over the three months to July was one of the largest short-term falls we’ve seen in the floating exchange rate period. But we’ve had one of the largest falls in commodity prices (and probably the terms of trade) on record, and I don’t think anyone would regard the TWI at just over 70 – where it has been for the last month or so – as particularly stimulatory. It is back at around the levels prevailing in 2010.

So combine subdued world demand growth, very deep falls in commodity prices, a levelling off in one of the biggest construction booms in modern times, continuing modest fiscal consolidation, subdued credit growth (except among distressed dairy farmers), real interest rates that remain very high by world standards, and a real exchange rate that has only dropped back to around the average level of the last 15 years, and it isn’t clear what is likely to hold up growth in New Zealand this year.

Of course, that migration-driven 1.9 per cent population growth helps boost demand. But since even at the peak of the migration inflows there was barely any real per capita GDP growth (and the level of the real per capita measure of income (ie allowing for the terms of trade) peaked in the March last year), that might be cold comfort. And the influx of people (especially the non-citizens) may well start to wane if the labour market conditions facing prospective employees keep on deteriorating. 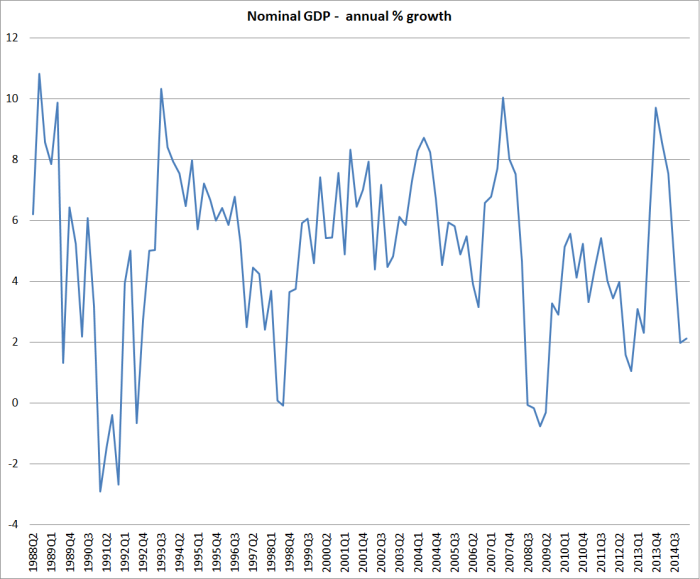 With the combination of mismanaged monetary policy, ebbing activity in one of the world’s largest economies (and major source of demand growth in recent years) and the very deep fall in commodity prices, it might be better to ask not “can we avoid a couple of negative quarters” – the technical recession question – but to ask instead what makes us confident we are not already in a renewed recession (real, as well as nominal), perhaps already deepening? I don’t purport to do quarterly GDP forecasts, and would be happy to be wrong on this one, but presented with the raw New Zealand data it looks like the sort of conclusion a visiting analyst from Mars might easily reach.

Downturns, recessions, corrections don’t last for ever.  And they don’t, in the end, make that much difference, to the longer-term (rather disappointing) performance of the New Zealand economy.  But for individuals –  particularly the 148000 unemployed, and the others likely to be joining them –  and business owners they can matter a great deal.  Some variability is natural and unavoidable (the two aren’t the same thing) but macroeconomic management should have been able to have prevented unemployment rising again before it ever quite recovered from the last two recessions, and to have avoided any new recession.  It looks to have failed already on the first count, and the outlook doesn’t seem promising on the second.