I opened the Wall Street Journal website this morning and noticed a prominent piece of advocacy (and here) , making the case for not increasing the Federal funds rate target yet. Plenty of market and other commentators openly run either side of that argument. But this column was from Narayana Kocherlakota, President of the Minneapolis Fed, and rotating member of (and permanent participant in) the Federal Open Market Committee, which takes monetary policy decisions in the US.

This is no, “on the one hand, on the other hand” treatment, but an article that begins with the rather bold statement

In his view, raising interest rates in the near-term would “create profound economic risks for the US economy”.

I happen to mostly agree with Kocherlakota’s conclusion –  since core inflation remains very low, and there is little or no sign of a quick return to the target rate –  but that isn’t my point.  I drew attention to the article because of the refreshing contrast  it represents to the way in which monetary policy deliberations and debates occur in New Zealand (and, to a lesser extent, in most other advanced countries).

I’ve highlighted previously that the Reserve Bank of New Zealand is just not that transparent about monetary policy.  Their formal model remains under wraps, written advice to the Governor on OCR decisions is kept secret, and no minutes of the Monetary Policy Committee or the Governing Committee are published.  The Bank was recently forced to release background papers for an OCR decision and Monetary Policy Statement from 10 years ago, but experience suggests they would fight very hard to avoid releasing rather more recent papers.  And that is even though all this material is official information, generated at the cost of your taxes and mine.

But one of the key features of forecast-based discretionary monetary policy (what the Fed, and the Reserve Bank and most other central banks try to practice) is how little any of us knows with any certainty.  Reasonable people can reach quite different views, not just on the outlook but on where the economy and inflation pressures are right now.  Reasonable people can also differ on how the Policy Targets Agreement should be best interpreted and applied.   And views inside central banks are typically no more monolithic –  if perhaps equally prone to herd behaviour –  than views outside.

So what is gained by maintaining the secrecy?  In some areas of public life there might be a real need for temporary secrecy.  Shaping negotiating positions, and identifying bottom lines, in trade negotiations might be an example.  But monetary policy deliberations aren’t like that.  The reputation of the Federal Reserve system doesn’t suffer because Kocherlakota runs a dovish line right now, or James Bullard runs a hawkish line. If anything, the reputation of the system is enhanced, because people can see able people grappling with the range of issues and evidence that need to feed into monetary policy decisions, and can test and evaluate the arguments those people are making.

Of course, it is much easier to adopt such a model in the US system, where FOMC members are independently appointed, and are not dependent on Fed system chair for pay or resources or the like.  It would be much harder to do in the New Zealand system at present, where all those who have a formal say in the system are senior staff, appointed by and accountable to the Governor.  But that only goes to highlight the weakness of our system, and why it would not be appropriate, when Parliament reforms the Reserve Bank Act, to simply give all decision-making powers to a group of senior managers and insiders.  Monetary policy issues like those we –  and the US, and most other countries face –  need robust and searching debate, and especially in a small country much of the expertise is tied up inside government institutions.  We need to create a culture that can encourage debate, and can live with differences of perspective.   I’m not suggesting that all debate should take place in public, but that there is a place for those actively involved in the decisionmaking process to participate openly in debate on these important issues, as happens in the United States or Sweden (and to a lesser extent in the UK)

Even now, if, for example, Deputy Governor Geoff Bascand opposes OCR cuts, we –  and not just the Governor –  should hear his case. Perhaps, with hindsight such an argument might prove right, or perhaps not.   In the nature of these things, no one is ever going to have the answer right all the time, and so in a collective decision-making model, of the sort other countries have, we should be holding participants to account not so much for any particular call, but for the quality and tone of the arguments and judgements each participant brings to the table.   Under the current system, perhaps a start might be made by publishing the written OCR advice the Governor gets prior to each OCR decision, and the minutes of the Governing Committee, when – straight after the MPS –  that information goes to the Bank’s Board.  But that is no more than a start: we need to move towards a system where an independent committee makes monetary policy decisions.  Under such a model, the Governor and staff would still have a crucial role, but their primary role would be advising the decision-makers.

In the next few days I want to come back to the much more severe problems of lack of transparency around the regulatory and supervisory functions of the Reserve Bank.

Reflecting further on the risks facing our banking system, I dug out some fairly long-term house price inflation data from the BIS for 19 OECD countries.  I was slightly hesitant about doing so, because there is a risk of feeding the narrative that vanilla lending secured on residential property is likely to be an important independent element in any financial system stress. As the Norges Bank has pointed out, and as the Reserve Bank has affirmed, that just hasn’t been so historically. To the extent that the United States last decade may have appeared an exception, it is important to recall that the heavy role Congress and the Federal government played in driving down lending standards, and the non-vanilla nature of much of the lending.

But for what it is worth, here are a few charts. In all cases, the latest observations are for the December 2014 quarter, which is as up to date as the BIS data are.

Here are real house prices changes since 2007 (most countries had a peak in or around 2007). 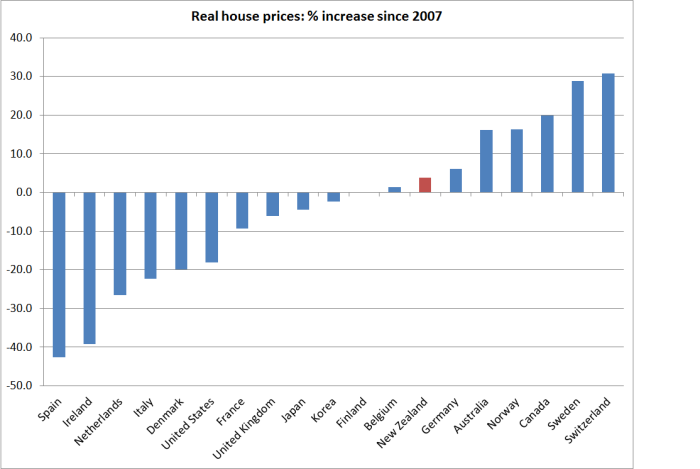 Real house prices in New Zealand have increased by less than those in Australia and Canada – and yet it is New Zealand banks that have been downgraded to BBB+, a rating not much higher than that held by South Canterbury Finance in 2008. As we’ve seen previously, New Zealand credit growth has done no more than roughly track nominal GDP growth over that period.

The BIS base their data at 1995. There is nothing special about 1995, although in most of these countries it was before any of the strongest house price booms had got underway.

Even over the whole 20 years, New Zealand real house prices have increased less than those in Australia and the UK. For the boom period itself (1995 to 2007) New Zealand’s house price inflation was only a touch stronger than that of the median country in this sample. 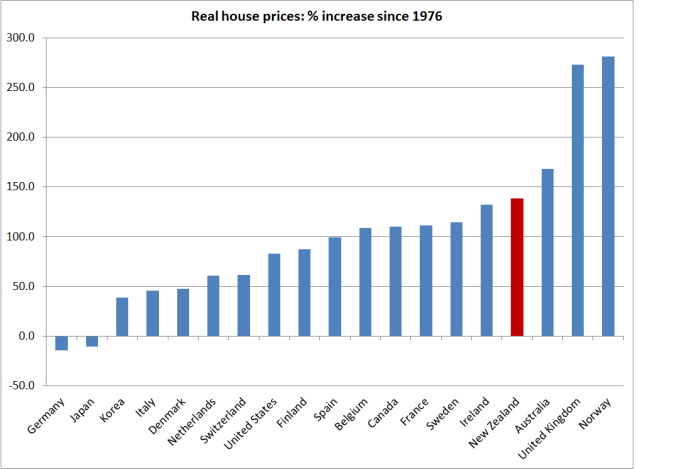 None of this is intended to convey any sort of sense of complacency about house prices in New Zealand (and especially Auckland). They are a scandal, resulting primarily from the acts (of omission and commission) of central and local government), but if anything have increased a little less than we’ve seen in countries with similar planning and land use restrictions (the UK’s are probably tighter, but population growth pressures are less there than in New Zealand and Australia).

But singling out the New Zealand banking system – as S&P appears to have done – seems unwarranted. There is no obvious material differentiation in the sorts of housing risks being taken on by New Zealand banks. Perhaps S&P are right about New Zealand. But the Reserve Bank’s stress tests results don’t suggest so. And, perhaps as importantly, historically, vanilla housing loans don’t lead to bank collapses, and systemic banks don’t collapse (or even come under severe stress) when credit has been growing no faster than GDP.  Reckless property development lending is a much more plausible culprit –  and we haven’t had it in the years since the recession.

Not entirely unrelatedly, I saw a piece the other day by Auckland City’s chief economist in which he cited some work done for the Council by NZIER suggesting that part of the growth in Auckland house prices can be explained by the proposed district plan changes that will allow for greater intensification in some parts of Auckland. I’ve seen a similar argument made by the Westpac economics team. But I must be missing the point. I can easily see why allowing more intensification on a particular section will increase the relative price of that section, but I cannot see how it can be raising prices of houses and land across Auckland as a whole.   Reducing land use restrictions – whether in respect of intensification, or allowing more dispersed development – increases the effective supply of land. And it seems unlikely that increasing supply will itself materially alter demand (eg materially increasing population growth, most of which is now driven by immigration policy). At least when I did introductory economics, increased supply would generally lower the price. It is easy to see why the relative (and perhaps even absolute) prices of some sections might rise if the reforms are for real, but surely any such effect should be more than offset by a fall in urban prices more generally?   If there is serious scope for more intensification, and that potential is expected to be utilised, then rational potential buyers all over Auckland should already expect less intense competition in future for this now less-scarce resource.  If anything, those prospective regulatory changes should be lowering prices now (perhaps only a little, because no one knows yet what real effect they will have), not raising them.

“we need to economise on the massive amount of urban land we already have, and use it to its best effect. Acukland needs to treat its land like gold dust and a little needs to go a long way”.

I’ve got no problem with removing land use restrictions, whether they are on outward or upward development, but lets recall that the only thing that makes Auckland urban land remotely comparable to gold dust is the regulatory regime which the Auckland Council administers and imposes. Yes, Parnell might always be expensive, but there is simply no reason why  sections in middling suburbs should be. Historically, as cities become richer they have less dense, not more dense.   Planners, councillors, and associated bureaucracts are the people who systematically impede that normal and natural process.