I’ve been puzzling over S&P announcement (and supplementary Q&A material)  the other day, lowering the stand-alone credit ratings of the major banks and the Banking Industry Country Risk Assessment (BICRA) score for New Zealand.  The BICRA was lowered from 3 to 4, on a 10 point scale, where the banking industries of Greece and the Ukraine score 10.

As I noted on Friday, the S&P ratings appeared somewhat inconsistent with the Reserve Bank’s 2014 stress test results, in which even some very severe adverse shocks did not generate loan provisions/losses that were large enough to induce material annual losses in any year of the scenario for any of the major banks.

As a reminder, S&P did not lower the actual issuer credit ratings of any of the major banks. Those issuer ratings incorporate the probability of parental support, and the possibility of government support, in the event that one of the banks got into difficulty. The issuer credit ratings remain at pretty respectable levels, with each of the big four banks at AA-.    This table, taken from sorted.org.nz, draws on Reserve Bank resources to summarise the ratings scale.

* The approximate, median likelihood that an investor will not receive repayment on a five-year  investment in time and in full based upon historical default rates published by each agency.

But the focus of last week’s announcement was not on the issuer ratings, but on the standalone ratings, and the wider environment in which the banking industry is operating. Standalone ratings look at the ability of the bank concerned to meet claims on it without extraordinary parental or government support. In other words, primarily, the quality of the loans on the bank’s books and the level of capital it has to absorb any losses.

And there, having read the S&P documents, and the limited media accounts of their follow-up comments, I am still puzzled.   Three of the big banks now have standalone ratings of BBB+ (while ASB is one notch stronger, and KIwibank and Rabobank are one notch weaker). As the table above suggests, a rating at that level is not much better than adequate. Based on historical experience it is really quite risky. When the Reserve Bank sets minimum capital requirements for banks – and all these banks have capital well in excess of the minimum – they are looking at something much more robust than that.

An S&P spokesman is quoted as saying ‘I think we are on the same page, more or less, as the RBNZ”. But I don’t see how they can be.    Here are the loan losses from the Reserve Bank’s stress test scenarios. 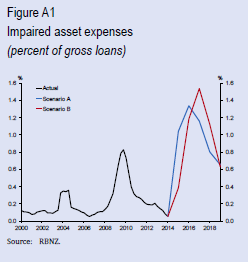 And here are the key capital indicators from the November FSR.

Capital ratios are much higher than they were in 2007 (and the risk weights are now typically more demanding as well), and there is a substantial buffer over the regulatory minima. The Reserve Bank’s stress test loan loss estimates could be understated by half, and the soundness of the banking system as a whole would still not appear likely to be in jeopardy.

But there are other puzzles in the S&P material:

There is no mention at all of the banks’ heavy dairy sector exposures, even though risk on that book is no longer a “low probability event” but something that is crystallising now, as weak world dairy prices and a continued high exchange rate combine to create severe cash-flow difficulties for many farmers, and the likelihood of a significant reduction in the value of the collateral banks have. After all, in a case of somewhat mixed messages, even the government is now belatedly talking of selling dairy farms.

If there is one area where one might be a little critical of the Reserve Bank’s stress tests it is around the dairy scenario, which assumes payouts of just over $5 for several years. Payouts at that level would be not much different, in real terms, from the longer-term historical average levels. There is a real risk already of something more severe than that scenario.   I think the Reserve Bank scenario came out this way because it was built on a severe recession (to trigger the big housing market correction and sharp rise in unemployment). A severe recession would be likely to see a much steeper fall in the exchange rate than we’ve seen so far, which would support the NZD value of returns to dairy farmers. In other words, potential losses on dairy debt aren’t additive to potential losses on housing loans – the scenario in which one might be very bad will typically be offset by less bad losses on the other portfolio. In the current climate, the dairy books look rather sick, while housing losses remain trivially low. If the housing situation worsened markedly (unemployment rose to anything like the 13 per cent in the Reserve Bank’s scenario), the exchange rate would probably be revisiting the lows seem in 2000 (around 50 on the TWI) and net returns to dairy farmers wouldn’t look anywhere near so bad.

But having said all that, it is still surprising that S&P didn’t even mention dairy exposures, by far the largest non-housing economic exposures on New Zealand bank balance sheets.

And S&P still regard any major rapid correction to house prices as “unlikely”.   From his public comments the Governor appears to think the risk is rather greater than that, even while reporting stress test results suggesting that the banks can cope with such a shock. It is all very well for S&P to talk about how a major house price correction would also have wider adverse economic ramifications. Everyone probably agrees with that – at least, unless the house price fall resulted from regulatory liberalisation, which might well be net stimulatory – but New Zealand authorities have far more room to lean against a severe economic slowdown than do authorities almost anywhere else in the advanced world (most of whom have interest rates stuck near zero already). Even relative to Australia (of which more below), the Reserve Bank has an additional 100 basis points available to cut the OCR.

Some of the cross-country perspectives don’t make a lot of sense either.   Just a couple of weeks ago, S&P was talking of upgrading the standalone credit ratings of the Australian banks, from A to A+, if those banks raised more capital to meet the higher minimum risk weights APRA is to require. But, as the IMF has recognised and is I think well-understood by the banks themselves, risk weights on housing loans have been materially more demanding in New Zealand than in Australia (or other advanced countries), thanks to the appropriately conservative approach taken by our Reserve Bank. APRA’s latest announcements probably only have the effect of bringing risk weights on Australian mortgage loans up to towards those already in use in New Zealand (the AFR reports average risk weights will have to be increased from a minimum of 16 per cent at present to a minimum of 25 per cent in future). House price inflation has also been strong in Australia – Sydney prices are even more unaffordable than those in Auckland –  and, if anything, credit growth has been running faster in Australia than in New Zealand. It is difficult to see quite how, on the material they have put out, the New Zealand subsidiaries warrant standalone ratings that would be three notches lower than those of the parents.

Finally, S&P defended the BICRA score (the move from 3 to 4) by noting that only 23 other countries had higher scores than New Zealand. That doesn’t sound too bad – although a far cry from “one of the strongest banking systems in the world”) if one thinks of 200 countries in the world, but in fact they only seem to do BICRA scores for about 85 countries. According to this document, from last November, only Switzerland scores a 1. At the time, countries with a 3 were Chile, Denmark, France, Korea, Netherlands, New Zealand, the UK and the US. That was, perhaps, questionable enough company given that Denmark, Netherlands, the UK and the US had all had banking crises in the last few years, and France was saved from one by the Greek bailout in 2010.   In group 4, along with New Zealand now, we find the Czech Republic, Israel, Kuwait, Malaysia, Mexico, Oman, Peru, Qatar, Slovakia and Taiwan. By contrast, Australia (and Canada) still scores a 2. I struggle to see how the risks in New Zealand look more similar to those “4” countries than they do to those in Australia and Canada (or even the UK). In each of those latter countries, house prices – at least in major cities – have got detached from sensible unregulated longer-term fundamentals.   And even S&P reckon that New Zealand house prices are not a “bubble” about to burst. Each has a floating exchange rate – a major element in economic resilience – and New Zealand banks seem particularly strongly and conservatively capitalised (the combination of risk weights, and actual capital ratios). Historically, residential mortgage loan losses not played a key role in systemic bank failures, and yet they are far the biggest exposures on New Zealand bank balance sheets.

The S&P model appears to put quite a lot of weight on New Zealand’s relatively high negative NIIP position. But I think they are largely wrong on that score too. First, the NIIP/GDP ratio has been fluctuating around a stable average for 25 years now. That is very different from the explosive run-up in international debt in countries such as Spain and Greece prior to 2008/09. But also the debt is largely taken on by the government (issuing New Zealand dollar bonds) and the banks. No one seriously questions the strength of the government’s balance sheet, or servicing capacity, even after years of deficits. And the ability of banks to borrow abroad largely depends on the quality of their assets and the size of their capital buffers. If asset quality really is much poorer than most have recognised, rollover risk could become a real problem, but it isn’t really an independent source of vulnerability

I’m not sure where I come out on all this. Even though the Governor is acting as if he doesn’t really believe the stress tests, neither he nor staff have given us any good reason to think their estimates – suggesting a highly resilient banking system at present – are wrong. Then again, people pay substantial amounts of money for S&P’s ratings services. It would be more reassuring if, in the follow-up commentary S&P had directly and specifically explained why they found the stress test results unpersuasive, or even why they think the risks to New Zealand banks are so much greater than those in, say, Australia or Canada.  Banks just don’t fail when they are (a) privately-owned, (b)  operating in a fairly stable environment (ie not newly deregulated), (c) not subject to government pressures to take on inappropriate risks, (d) where total assets have been growing no faster than nominal GDP for years, (e) strongly (and increasingly) capitalised, and (e) where the largest component of assets is residential mortgage loans.

As some commenters have pointed out, having been somewhat burned in 2008, perhaps rating agencies have an incentive to overstate risk at present. But even if that is true – and I’m not sure it is, after all the last few years have been characterised by a renewed and rather desperate global search for yield, any yield – it still can’t explain why S&P seem to see so much risk in New Zealand relative to the situation in other floating exchange rate advanced countries. Of flexible exchange rate OECD countries, only Turkey, Iceland and Hungary now have BICRA scores worse than New Zealand.

I don’t believe it.