Skip to content
HomeJust how large a contribution has net migration made to population growth?

One of the challenges in discussing the impact of immigration in New Zealand is making sense of the data.  I’m running a story that says two (largely unrelated) things:

We know the key policy parameters.  Specifically, there is a currently a government target of 135000 to 150000 permanent residence approvals on a rolling three year basis.  That isn’t all the non-citizen migration but it is the overwhelming bulk of trends in it.  There are lots of short-term flows, but my real interest is not in year to year fluctuations but in the contribution of immigration policy to the trend growth in New Zealand’s population.

When people turn to Statistics New Zealand data to analyse migration they most often look at the data on permanent and long-term (PLT) migration.  For any analysis about what is happening over short periods of time, it is the only sensible series to use.  The alternative is to use SNZ’s total migration data but (even when seasonally adjusted) it is hugely volatile in the short-term.  The noise swamps any signal.  Major sporting events –  eg Lions tours, or the rugby world cup – are an example of what muddies the water.

But the PLT data have their own limitations.  The total migration data are volatile, but they do count every person arriving in and departing from New Zealand, and so provide a highly accurate count of the cross-border contribution to the number of people in New Zealand at any one time.  By contrast, the PLT numbers are less volatile, but they rely on the self-reported intentions of travellers.  When someone arrives, or leaves, they fill in the arrival/departure card stating whether they intend to go/come for less or more than 12 months.  Those stating “more than 12 months” are treated as permanent or long-term movements.

But even if everyone answers the question honestly, plans change.  Some New Zealanders go to Australia in search of a better life, perhaps planning never to live here again.  But Australia doesn’t always live up to expectations, and some will come back to New Zealand a few months later.  Those people will have been PLT departures when they left, but returning short-term travellers when they come home.  Similarly, some foreigners come to New Zealanders planning to stay forever, but leave again a few months later.  Some New Zealanders go to Australia for a few months, but find a good job, settle, and don’t come back.  And some foreigners might arrive initially on short-term visas, but then end up staying permanently (most permanent residence visas these days are issued to people already in New Zealand).

Statistics New Zealand has recognised the issue.  Late last year, partly prompted by my focus on the issue, they published a paper (which unfortunately got little or no coverage), reporting some experimental work they had done on trying to improve estimates of actual permanent and long-term migration (as opposed to self-reported intentions).  As one example of what they did, passport numbers were matched to check how many of those who (for example) said they were coming for less than 12 months were still here 12 months later.  Over the 2000s it was pretty clear that estimates of actual permanent and long-term migration could be materially improved.  Over 2002/03 “true” PLT flows appear to have been materially larger than self-reported PLT flows, and over 2010-12, true PLT flows were materially weaker than the self-reported flows.  In each case, trends in the total migration series were more reflective of what was going on than the self-reported PLT numbers.  This chart is from the SNZ paper.

SNZ has not backdated its experimental estimates prior to 2000, and apparently (and unfortunately) does not have funding to produce these estimates on an ongoing basis.  But over much longer periods of time these differences also appear to matter.   Infoshare has data that distinguishes PLT and total migration since 1921.  Here are the cumulative net inflows in the two series.

The cumulative difference is 170000 people (total net migration is much larger than self-reported PLT) –  quite material in terms of thinking about changes in New Zealand’s population which, even now, totals only 4.6 million people.  And the difference is not just down to, say, the growth of tourism: SNZ report that at any one time there are around 150000 foreign visitors in New Zealand, and around 115000 New Zealand visitors in other countries.

The divergence since 1921 is large, but note the crossover point in the early 1980s.  Until the end of the 1960s, self-reported PLT immigration had been consistently larger than total net immigration.  In earlier decades, there wasn’t much short-term tourism or many foreign students in our universities.  Since the outflows of New Zealanders also weren’t large until late in the period, much of the difference was probably down to people getting here and deciding New Zealand wasn’t really for them and going home again.

Self-reported net PLT outflows from the mid 1970s were large.  The flow of non-New Zealanders was quite small in this period (policy having been tightened materially in 1974), while the big change was the upsurge in the outflow of New Zealanders.  But since the (accurate) measure of total inflows and outflows shows nothing as large as the recorded self-reported PLT outflows, my hypothesis is that many New Zealanders set out to go to Australia for the long-term but quickly came home again.  The differences are huge: PLT data suggest a net 250000 outflow from 1976 to 1990. But the total migration data suggest a net outflow of only a little over 100000.

What about the more recent period?  Immigration policy was reformed and materially liberalised from around 1990 (in a succession of changes).    Here is the chart for total migration and self-reported PLT migration since 1990.

There isn’t much difference in the first few years, but from the late 1990s there has been a material difference between the two series.  Even the direction of change isn’t the same each year in the two series.  If one takes the total migration series as a better representation of the migration flows contribution to population changes (and demand for accommodation) than the self-reported PLT series, there was little or no net migration over 2008 to 2013 taken together (the red line goes sideways for that period), before the population pressures resumed strongly from 2013.  That coincides with the resurgence of very high house price inflation in Auckland.  Quite what is accounting for the divergences in the two series recently isn’t clear.  The SNZ paper I linked to earlier does not distinguish between NZ passport holders and other passport holders (although presumably they have the data).  Plausibly, some part of the difference will be down to New Zealanders finding Australia tougher than they expected and returning to New Zealand within 12 months of leaving, and some part will be down to foreigners arriving short-term and finding legal ways to stay for a longer term. 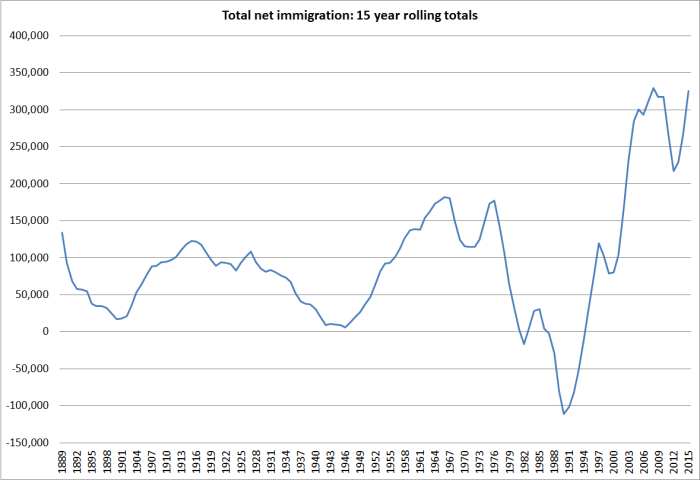 These aren’t scaled for population, but New Zealand’s population in 1960 was about half what it is now, and the net migration inflows recently have been about twice as large as they were in those early post-war decades.  In those post-war decades,New Zealand experienced persistent pretty extreme excess demand pressures.  They didn’t show up in high interest rates (which were controlled) or in the foreign debt (the private sector largely couldn’t borrow, and the government didn’t). Instead, it showed up in the extensive network of controls  – on credit, on building activity, on imports, on holidays abroad etc – that was needed to keep excess demand in check.  Economic historians writing about New Zealand’s post-war experience seem to have been pretty well agreed that immigration policy exacerbated those demand pressures, rather than alleviated them (as I documented in this file note  Economic effects of immigration and the New Zealand economic historians ).

My story is that much the same pressures have been apparent since the resurgence of immigration in the 1990s –  but this time they show up in real interest rates and in a large negative NIIP position (which would otherwise probably have shrunk considerably as the fiscal accounts moved strongly into surplus).

6 thoughts on “Just how large a contribution has net migration made to population growth?”