The National Party seeks a safe, prosperous, and successful New Zealand that creates opportunities for all New Zealanders to reach their personal goals and dreams.

We believe this will be achieved by building a society based on the following values:

And so I was bemused to read that the government is to propose legislation, and regulation-making power, to require all rental properties to have smoke alarms installed and to be insulated.

Quite how this fits with the National Party’s stated values (especially the four from “individual freedom” onwards) is a bit of a mystery.  It is also mysterious how it fits with the emphasis the government claims to have been putting on improving the supply of housing and housing affordability.

I glanced through the Cabinet paper and am pretty sure I found no discussion or analysis of any market failures.  There was certainly no discussion of government failures.  And, perhaps as ever, both in the Cabinet paper and in the commissioned cost-benefit analysis on MBIE’s website, possible private benefits are routinely described as “social benefits”.  People make choices, and revealed preferences tell us something about the value they place on things.

The private rental market is a competitive one, offering a range of types and standards of accommodation.  That seems to me to be as it should be.  In that respect, it is like the owner-occupation market.  Personally, I had not had smoke alarms in the houses I’ve owned and lived in (but did have them in a rented apartment) until very recently.  Securing a building consent forced us to have them installed.  I would happily have them removed if I could (I’m pretty sure the cost-benefit analysis did not factor in the time and aggravation in digging out the broomstick to turn off yet another alarm triggered by routine cooking vapours).

I don’t yet see a RIS on the MBIE or Beehive websites.  Perhaps one will display more signs of analytical rigour, but it is difficult to be optimistic on that score.  This has all the signs of “ feel good” policy, which typically results in poor policy.  And if it is such a good policy, with such a compelling social case that we can coercively override private preferences, why not mandate such standards for all existing owner-occupied homes as well?  But perhaps to mention that option is just to give ministers ideas.  Sadly there is also no sign in the Cabinet paper as to why rental properties (where mobility is considerably easier) should be subjected to this regime, and not owner-occupied properties.  Are private renters so uniquely unable to assess their own interests?

UPDATE:  I didn’t get far enough through the Cabinet paper to get to these fairly damning paragraphs, which I thank a reader for pointing me to

114 The Regulatory Impact Analysis Team (RIAT) in the Treasury has reviewed the smoke alarm and insulation RIS. RIAT considers that the information and analysis summarised in the RIS does not meet the quality assurance criteria. As well as lacking analysis (particularly of the proposals to strengthen enforcement powers, rec 8), there has been inadequate consultation.

115 Given the broad and pervasive nature of the problem definition, the objectives are narrowly defined, preventing consideration of alternative standards and methods of improving health outcomes for tenants. RIAT is not confident that the range of potential options has received adequate analysis, particularly for enforcement.

116 The RIS does identify, describe, and where possible quantify, likely impacts of the proposals. However, the impact in practice will be highly dependent on the responses of individual tenants and landlords, which are difficult to assess given the limited consultation. RIAT notes in particular that the cost-benefit analysis for smoke alarms is dependent on an assumption of high or full compliance. There is also a lack of discussion about the potential for landlords to pass on to tenants increased costs of insulation (in the form of higher rents).

117 Finally, the RIS does not differentiate the proposal to strengthen enforcement powers for RTA breaches from the proposed standards for insulation, despite these options addressing different problems. RIAT recommends that more consideration be given to including enforcement matters in the monitoring plan which should enable informed analysis in any future reform.

Of course, even that statement is not as simple or uncontentious as it looks.  The shorthand people are using here is the “two consecutive quarterly falls in real (seasonally adjusted) GDP”.  On that measure, New Zealand actually had two recessions (from a peak in 2007q4 to a trough in 2009q2, and not having regained the previous peak, real GDP again fell for a couple of quarters from mid 2010).  By contrast, real GDP in Australia fell in only a single quarter, in 2008q4.

But Australia did not just sail through unscathed:

So, I don’t want to get hung up on the question of whether Australia had a recession or not.  But it is pretty generally accepted that Australia was less hard-hit than New Zealand (and many other countries).

Some people reckon that the difference is fiscal policy.  No doubt senior figures in the then Australian Labor government (if they could agree on anything) would like people to think so.  The government, egged on by the Australian Treasury, announced two significant fiscal packages in the middle of the global crisis, one in October 2008 and another (much larger) one in February 2009.  By contrast, neither New Zealand government (either side of the November 2008 election) did any material amount of discretionary fiscal stimulus in response to the crisis.

But what I find striking is how similar New Zealand and Australian fiscal policy was, in bottom line terms, during the second half of the 2000s.  If we did not have a crisis-response package in late 2008, we had had a very expansionary Budget earlier that year.  And both countries had been running down structural surpluses for several years.

Here are some charts from the IMF WEO database: 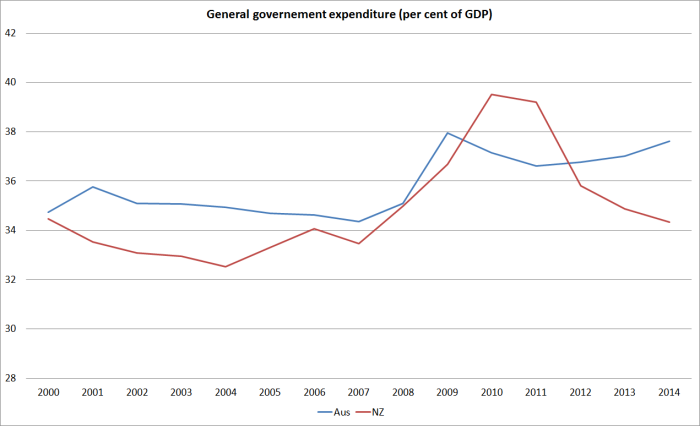 For the fiscal balance 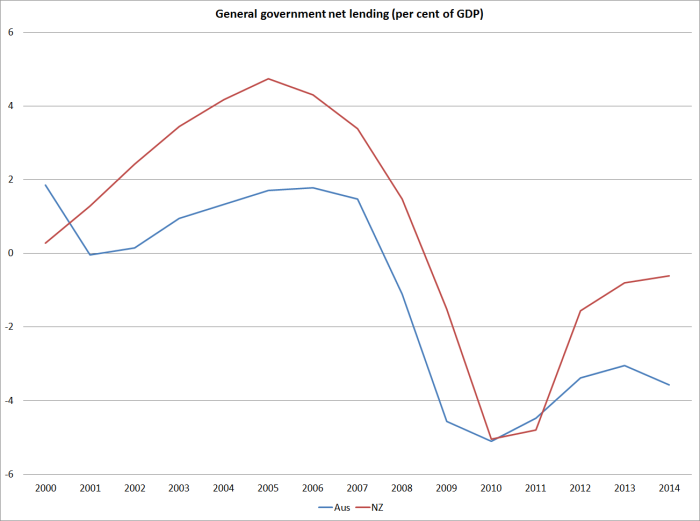 And for the (estimated) structural balance 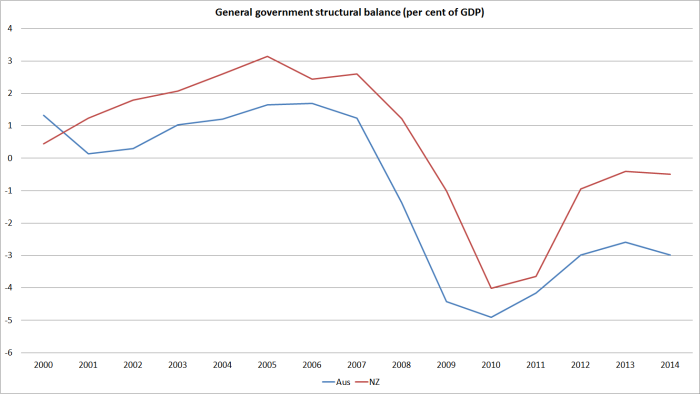 And, perhaps most starkly, here are direct real government purchases (consumption and investment) for the two countries (indexed to 10o in 2007q4).  It is not until the start of 2010 that one can see any material difference between the two lines.  New Zealand’s recession (like those of most other OECD countries, ended in mid 2009). 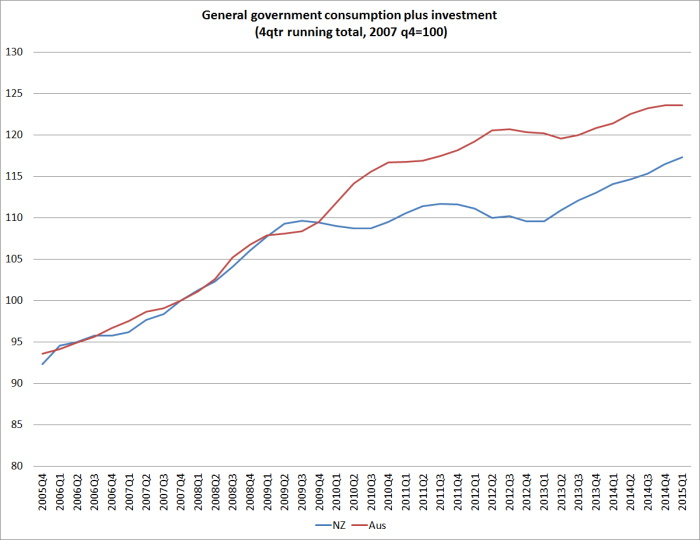 Of course, these are highly aggregated numbers, and it may be that there was something in the specific make-ups of the fiscal programmes that meant fiscal policy was much more effective in Australia.  But it isn’t obvious, and it probably shouldn’t be that surprising since in both countries the central banks will have been taking fiscal developments into account in deciding how much to cut their respective policy interest rates.  As it happened (and unsurprisingly) the Reserve Bank of New Zealand cut the OCR by much more (575 basis points) than the RBA (which cut by 400 basis points from the end of 2007 to the trough in April 2009 – having raised the cash rate in early 2008).

So if fiscal policy differences don’t appear to explain why Australia did less badly through this period, what does?  In the New Zealand story, the drought at the start of 2008 didn’t help.

More generally, the terms of trade are very important to both countries, and in both countries they are quite volatile.  In New Zealand, changes in the terms of trade flow more directly into changes in household incomes, since most of the tradables sector is domestically owned (FDI in New Zealand is heavily concentrated in the non-tradables sector).  By contrast, most of the Australian minerals sector (where the terms of trade volatility arises) is foreign-owned, so that Australian residents’ incomes are not so directly affected.  But the Australian minerals sector is very capital intensive, and huge investment programmes drive off actual and expected minerals prices.

What happened to the terms of trade in the two countries?  New Zealand’s increased by around 10 per cent in 2007, and then started gradually falling away again.  But Australia’s terms of trade rose by around 20 per cent in 2008.  The terms of trade then fell away almost equally sharply  before the effects of the Chinese rebound drove hard commodity prices on to their 2011 peak.    But what that timing difference meant was a quite different environment for the Australian economy in 2008 than was the case in New Zealand (or most other OECD countries). 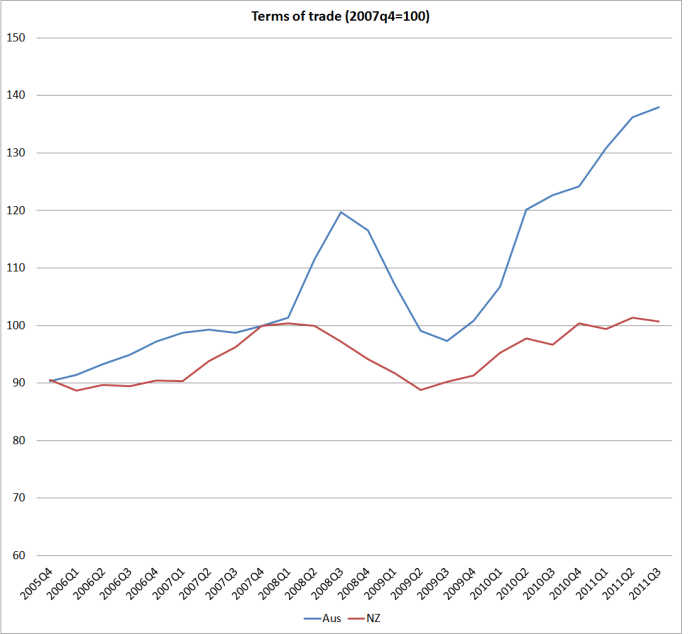 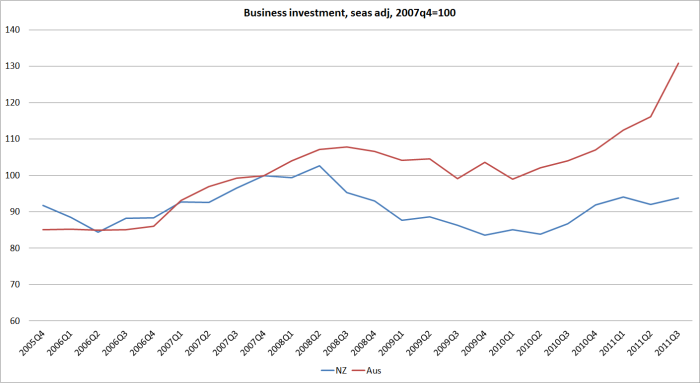 In closing, here is the chart of RGNDI (for NZ) and RNNDI (for Australia), both indexed to 2007q4 (the peak of the last cycle for NZ, the US, and a number of other OECD countries).  It helps highlights just how important that 2008 terms of trade surge was in limiting the slowdown in economic activity in Australia through 2008. 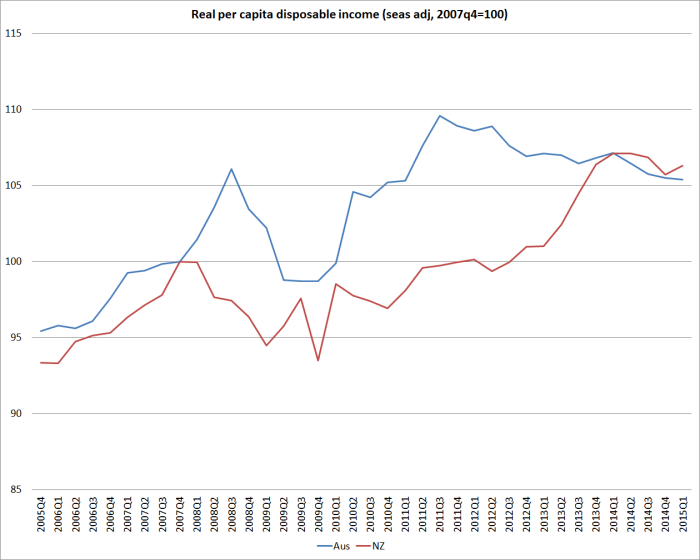