For anyone interested in a bit of background to this blog, and on me, Richard Harman, proprietor of the new New Zealand political news and analysis site, Politik ran a profile of me this morning.

It is a pretty fair reflection of our interview, and reflects my interests and aspirations –  in particular, the issues around New Zealand’s long-term economic underperformance matter a great deal more to me than critiques of aspects of the Reserve Bank.  When I left the Reserve Bank, I intended that Bank-related material would represent a distinct minority of my posts.  That is still my aim, but it may take some time to get there (and as one journalist who came to visit said to me “I wouldn’t be here if you were writing mainly about long-term economic performance issues”).

Sadly, the description of the Governor’s attitude to some criticisms I made of a draft document around the first set of LVR controls is accurate.  After that episode –  where even the extreme disapproval was only conveyed indirectly –  our next conversation was two years later when we accidentally found ourselves alone in the same lift in the midst of the restructuring that led to my job being abolished.  I was clearing my desk and carrying a box of books down to my car.  To his credit, Graeme did actually manage to make conversation –  about Piketty’s book, a copy of which was on top of my pile.

I should make one clarification/correction.  I’m reported as saying, about LVR restrictions, “Furthermore the Bank had done no research on what the likely impact of the controls might be.”.  I don’t think that was what I said, but if I did say it, it was not what I intended.  My criticism of the Bank’s analysis and argumentation around LVRs has been around

And  in the final sentences, I’m not sure how my friend and former boss Don Brash ends up classified by Harman as a “non-practitioner”.

These annual productivity data focus on the so-called “measured sector”, whereas most often (for data availability reasons) productivity comparisons are done for the whole economy.  The measured sector currently covers 77.3 per cent of the economy.  It excludes ownership of owner-occupied dwellings, public administration and safety, education and training , and health care and social assistance –  all sub-sectors where market price information is difficult or non-existent.  The measured sector data are good quality but (a) are only available with a considerable lag (data released yesterday are up to the year ended March 2014), and (b) are mostly only useful for looking at New Zealand’s own performance over time (and only limited amounts of time, since the data on this measure go back only to the mid 1990s).  Other databases, typically using whole economy measures, are more useful for timely cross-country comparisons. 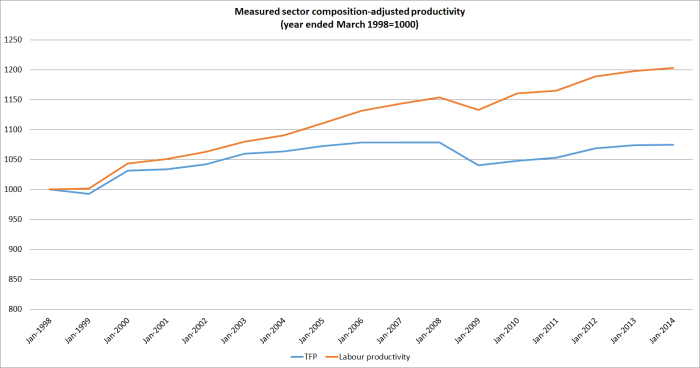 On this measure, labour productivity growth does not look too too bad.  In particular, although growth since 2007/08 has been slower than it was previously, the slowdown is less marked than many other series show for other countries.  But bear in mind that over the 16 years shown, total growth in labour productivity was only 20.3 per cent –  just under 1.2 per cent per annum.

By contrast, the TFP picture is sobering.  In the 11 years since 2003, total TFP growth has been around 1.5 per cent (little more than 0.1 per cent per annum).  As I’ve suggested previously, perhaps there is something in the notion that the higher terms of trade (since 2004) have undermined TFP growth, changing production patterns to take advantage of the higher output prices but in ways that reduced measured productivity.  Perhaps, but I doubt if the effect can have been quite that large.  And the sectoral TFP data back up those doubts.  Here is the chart for agricultural sector TFP (only available to March 2013).  It is a noisy series (droughts do that), but it looks as though there has been some TFP growth in the sector since 2003, unlike the picture in the aggregate TFP series.

Finally, a quick comparison with the Conference Board estimates for New Zealand, which I used in my series on cross-country comparisons since 2007.    Here is the chart.

The Conference Board uses a model to estimate TFP which ascribes more of New Zealand’s growth to the growth in capital services (than SNZ do).  (Like SNZ they make a correction for changing labour quality).   There is no point directly comparing the number from the SNZ measured sector TFP series with the Conference Board TFP series – different models produce different results.  But what is perhaps useful is to note that in both models New Zealand’s TFP growth has tailed-off markedly since 2003.  That should be pretty disconcerting.

And here is the international context for TFP growth, with a focus on the post-2007 period.