Skip to content
HomeLVRs, interest rates and so on

I was recording an interview earlier this afternoon, in which the focus of the questioning was the Real Estate Institute’s call for some easing in the Reserve Bank’s LVR restrictions.

Of course, I never favoured putting the successive waves of LVR restrictions on in the first place.  They are discrimatory –  across classes of borrowers, classes of borrowing, and classes of lending institutions –  they aren’t based on any robust analysis, as a tool to protect the financial system they are inferior to higher capital requirements, they penalise the marginal in favour of the established (or lucky), and generally undermine an efficient and well-functioning housing finance market, for little evident end.  Oh, and among types of housing lending, they deliberately carve-out an unrestricted space for the most risky class of housing lending –  that on new builds.

In any case, it isn’t that clear quite how large a role the LVR restrictions are playing in the reduction in sales volumes.   They must be playing a part, but so too will higher interest rates, and the apparent increase in banks’ own lending standards, and pressure through the parents from APRA (on the lending standards across the whole of Australian banking groups).  Which, of course, is also why it isn’t clear quite how much difference any easing back in the New Zealand LVR controls might make.  Some presumably, but even the Reserve Bank has never claimed that LVR controls would have a very large impact on house prices, or housing market activity, for very long.   And while I noticed an article this morning about negative equity, it is worth bearing in mind that, on the REINZ index (not using median prices), house prices have risen 65 per cent in the last five years, and are currently 0.6 per cent off their peak.

But what of interest rates?  A year ago, the OCR was 2.25 per cent, and today it is 1.75 per cent.  Thus, the Reserve Bank talks of having eased monetary policy.   Here are mortgage rates though. 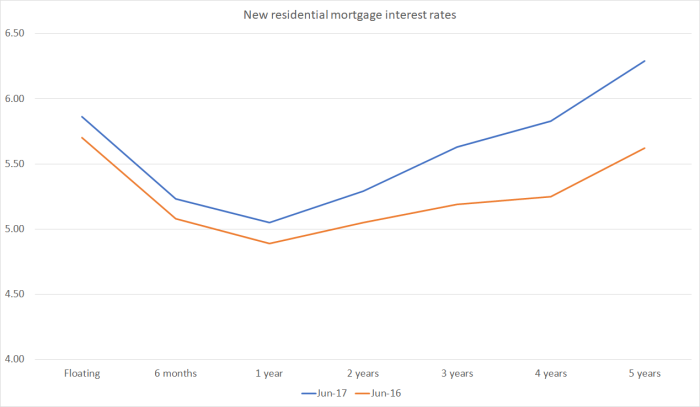 I don’t suppose anyone is taking out four or five year fixed rate mortgages, but across the entire curve, interest rates are higher not lower.   Or we could go back another year or so, to just prior to when the Reserve Bank began cutting the OCR.   The OCR has been cut by 175 basis points since then.   Even at the shortish end of the mortgage curve, rates are down only 50-70 basis points.

Having been reflecting this morning on Graeme Wheeler’s performance over his term, I had a look back at where interest rates were when Wheeler took office in September 2012. 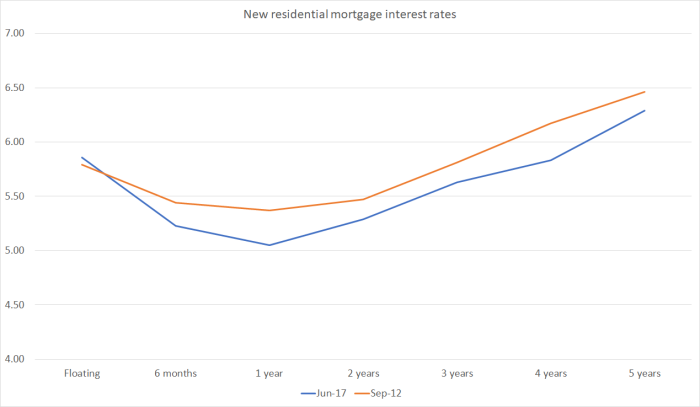 Barely lower, even though core inflation –  on their own favoured measure – is as low today as it was then (and has been consistently low throughout his term).

I wondered if there were offsetting factors but:

Of course, the unemployment rate has fallen since September 2012, but there hasn’t been any sign of a pick-up in the best indicator of labour scarcity –  real wage inflation.

So, overall, it is a bit of a puzzle how the Governor expected to get core inflation back to fluctuating around the target midpoint without actually easing monetary conditions.  I don’t happen to agree with him on this one, but he keeps talking about how the huge migration inflows have reduced net inflation pressures (supply effects outweighing the demand effects).  If he really believes that it is even more puzzling that monetary conditions haven’t been eased.

I’m not sure how he’d respond.  But perhaps he could explain that too in the forthcoming speech.

8 thoughts on “LVRs, interest rates and so on”