Skip to content
HomeWhat occupations did our permanent and long-term migrants have?

As I’ve noted previously, even among those gaining permanent residence approvals only around half (including the immediate family of the primary applicants) come under a skills heading, and in some cases they don’t seem overly highly skilled.

I highlighted a couple of weeks ago how relatively unskilled many, perhaps even most, of those coming to New Zealand on work visas are, even under a so-called Essential Skills category.  That programme increasingly looks like another example of corporate welfare.  But the standards are somewhat more demanding to gain a permanent residence approval.  I used the work visa data because it was available at the right, disaggregated, level of detail.  I haven’t been able to find anything comparable for permanent residence approvals  (if any readers know of such data I’d happily be pointed to it).

But Statistics New Zealand does have data on Infoshare about the occupations of permanent and long-term arrivals.  These data have their limitations including:

Many arrivals don’t have an occupation either –  they might be students, children, the aged, or non-employed spouses caring for children.  Oh, and SNZ report that around 5 per cent of all stated occupations (on arrivals cards) are illegible, or otherwise unable to be fitted into ANZSCO occupational classifications.

There isn’t anything that can be done about the second and third points, but most of the flow of New Zealanders is to and from Australia, and most of the flow between New Zealand and Australia is New Zealand citizens.  So the charts below shows PLT arrivals, for the last five years, from places other than Australia, where the person arriving wrote down a clearly identifiable occupation.  There were around 135000 of these people.

First, the positive story.  This chart showed the occupations that looked like the sort of positions people (including me) have in mind when they hear that New Zealand has a skills-focused immigration programme, designed to lift overall economic performance over the medium-term.  There were about 38000 arrivals in these occupational groupings.  Jokes about, say, lawyers aside, I doubt anyone is going to quarrel much with people like these, if we are going to run a large scale immigration programme. 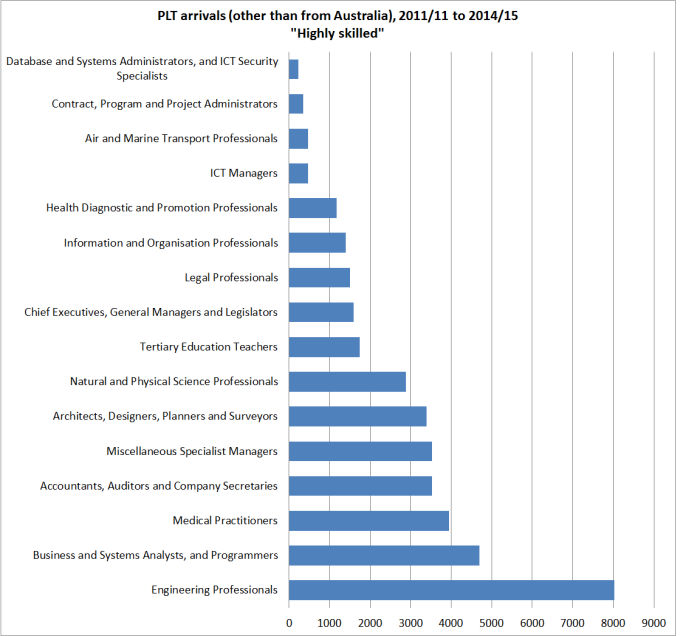 Second, the not-so-positive side.  There were 51000 arrivals (38 per cent) in occupations that few people think of when they think of a skills-focused immigration programme.   People will no doubt differ a little on what roles to put in this list, but as a whole it makes quite sobering reading.  And remember that SNZ are only capturing here the people who actually report an occupation.

There is a middle group of occupations that I won’t show in detail. In deference to the Christchurch repair and rebuild process, I’ve put most building and construction-related positions in that category.  But the largest single group in that middle category, somewhat to my surprise, was school teachers. No doubt there are many able immigrant school teachers, but again they aren’t usually the sort of grouping most people have in mind thinking about skills-based immigration programme (and I doubt many of them are teaching advanced high school science courses).

So most of our migrant arrivals aren’t actually here for their skills at all, even on the government’s rather generous interpretation of skills.  And of those who are, a huge proportion look to be people, or occupations, that aren’t overly skilled at all.  The Treasury papers I discussed a few weeks ago provided little or no basis (or reference to other material) showing how our skills-based immigration, as actually run, was boosting the productivity and future incomes of New Zealanders, despite the rhetoric of ministers and of the Secretary to the Treasury.  I now have the papers MBIE has released, but have not yet had time to work through them. I’m hoping there is something more substantial there.  At the moment, however, the large scale active immigration programme has the feel of something just focused on driving up New Zealand’s population, with little or no robust analysis or evidence to support a belief that New Zealanders are benefiting from the programme.  If there are benefits to New Zealanders from the skills migrants are bringing, they are likely to be concentrated in the sort of occupations/skills captured in the first chart above. We could tap those gains with a much smaller permanent residence approvals programme –  perhaps 10000 to 15000 per annum, rather than the current (very large by international standards) 45000 to 50000 per annum.

10 thoughts on “What occupations did our permanent and long-term migrants have?”