Skip to content
HomeDoes anyone believe core inflation is about to rise?

The next Reserve Bank Monetary Policy Statement is scheduled for 10 September. Unless they’ve materially changed the timetable, this will be the week in which the Governor, his staff and advisers will be in long meetings, working their way through the data from the last few months and the draft economic forecasts. The forecasts are finalised to be not-inconsistent with the Governor’s preliminary OCR decision (which is usually made at this stage of the process, but can be revised very late in the piece).

One set of data was released only yesterday (although the Bank will have had it last week). That is the results of the Reserve Bank’s two expectations surveys. The household survey, of around 1000 people, asks only about CPI and house price inflation, while the other one, the Reserve Bank’s Survey of Expectations asks quite a wide range of questions about financial and macroeconomic variables. I’m not sure how many respondents they now have, but it used to be around 70. Respondents were a mix of people from business, the labour market, the financial sector, and economists (I’m now one of them). We used to treat this survey as the responses of an “informed” group, even if not many were experts in each of the areas on which they were questioned. The surveys have both been going for quite a long time now, and complement the quite different sorts of information available from business and consumer confidence survey. For some years, we ran a staff version of the Survey of Expectations, which occasionally raised interesting question when it showed up material differences between staff and respondents’ expectations.

Of all the questions in the two surveys, only one tends to get any media coverage (or even much market economist coverage). That is the question in the Survey of Expectations about what respondents expect the annual inflation rate to be in two years time. It gets focus because it is the variable that the Reserve Bank pays most attention to, and relatedly because it appears in many of the Reserve Bank’s formal models of the inflation process. The two year ahead measure gets the focus because it should largely “look through” most of the short-term fluctuations in inflation (oil prices ups and downs, tax changes, and so on, which can have a large effect on short-term inflation, but shouldn’t normally affect medium-term inflation). And, empirically, the two year measure seemed to do reasonably well (together with some measure of excess demand) in equations explaining (core) inflation; or at least it did until the last few years.

You may recall that in the July OCR review, and the Governor’s subsequent speech, the Bank affirmed its view that although current headline CPI inflation is still very low (0.3 per cent in the year to June), it would soon be back to around the 2 per cent middle of the target range.   They talked in terms of inflation being back near the midpoint by early-mid next year.  I and others have previously made the point that, even if so, this would be just a one-off lift in the inflation rate, as prices adjusted to a lower exchange rate, and would not represent a lift in core inflation pressures.

Respondents to the Survey of Expectations seemed only partly convinced by even this element of the Bank’s story. Year-ahead inflation expectations picked up from 1.32 per cent to 1.46 per cent, and two year ahead expectations also rose slightly, up from 1.85 per cent to 1.94 per cent. Among households, year ahead expectations rose, while five year ahead expectations were unchanged.  The Reserve Bank is likely to take some comfort from these results, reinforcing the Governor’s bias (at least at the time of his speech) that the OCR didn’t need to be cut much more. But I think they would be wrong to take any comfort from them. As I dug through the numbers, I was staggered at how weak they were (and as I say that as one who is more pessimistic than the mean response on most, but not all, questions).

Let’s deal with households first. The numerical expectations that respondents reported did increase, but the survey also has a question – which, from memory, gets a better response rate –  as to whether the respondent thinks the annual inflation rate will rise, fall, or stay the same over the coming year. Households have always – every quarter since 1995 – reported a net expectation that inflation will rise over the coming year, but this quarter’s response was one of the lowest ever. 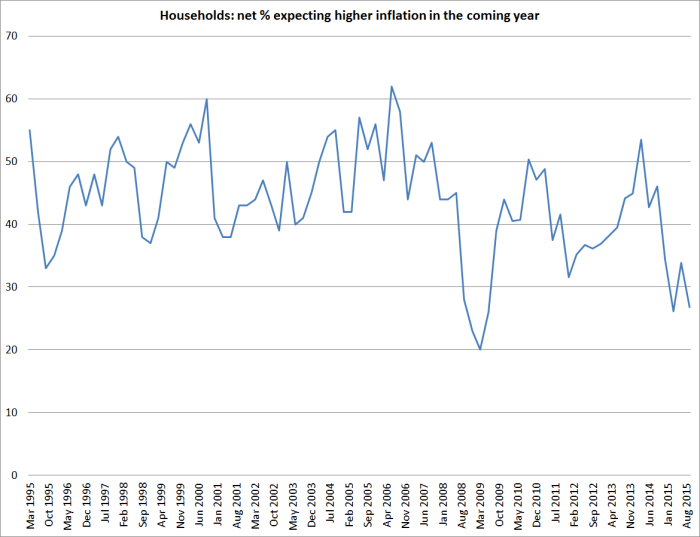 The only time a smaller proportion of people expected inflation to increase over the coming year was at the end of 2008, when the actual annual inflation rate was peaking at just over 5 per cent ($150 oil prices and all that). Quite reasonably, and in the middle of a severe recession, not many expected the inflation rate to increase from there. The Reserve Bank apparently expects inflation to rise from 0.3 per cent to something around 2 per cent by the middle of next year. That is a really large increase to publicly project – and it got a lot of coverage – but households don’t believe it. They don’t expect inflation to rise much at all. They might be wrong, of course, but they don’t seem to believe the Bank at present.

What about the more informed group, the respondents to the Survey of Expectations? Here we have the luxury of getting a bit more of sense of how respondents (collectively) are thinking, since we get answers to a whole variety of macro and financial questions (although perhaps the Bank might think of adding a house price inflation question to this survey).

Respondents are asked a number of inflation questions. They are asked for their expectations for each of the next two quarters (in this case, September and December) and for their year-ahead expectation. That means we can back out an implied expectation for the second six months (in this case the first half of next year). There isn’t much sign that respondents expect inflation to rise. They are expecting inflation of 0.67 per cent for the second six months of this year (still one of the weakest six month ahead expectations ever), and 0.78 per cent in the first six months of next year.  In other words, there is hardly any pick-up in near-term inflation even following one of the sharpest three month falls in the exchange rate we’ve seen since the  float thirty year ago. It is exactly the same extent of pick-up, from the first half of the year ahead period to the second half, as the average expected in the surveys done over the previous two years.

Like the Reserve Bank’s projections, the Survey of Expectations respondents take account of any changes in monetary policy they expect over the survey horizon.   We get a direct steer on that from the questions about the expected 90 day bank bill rate in a year’s time.   In this survey, that expectation fell sharply, down by 92 basis points  – and the only time there has been a larger fall than that was at the height on the financial crisis in 2008/09.  Respondents expect that the OCR next June will be around 2.5 per cent – probably not a lot different than the Governor had in mind in his speech. Even with these big cuts in interest rates, respondents don’t see the rebound in expected inflation.

The survey also asks respondents about their perceptions of monetary conditions (actual and expected). “Monetary conditions” isn’t defined, and respondents may be influenced by factors such as interest rates, exchange rates, share prices, and credit conditions.   Respondents think conditions at present are (quite considerably) on the easier side of neutral, but what caught my eye is that this is the first quarter in the history of the survey when respondents have both thought current conditions were loose now, and expected them to get looser still over the coming year.

Survey respondents’ GDP growth expectations have also fallen   Expected growth rates of around 2.3 per cent for the year ahead and two years ahead would barely even match potential growth over that period, suggesting little prospect of an increase in core inflation. Consistent with this story about potential, unemployment rate expectations have risen notably, and are expected to stay at around 5.8 per cent for the next two years. If anything, medium-term expectations are getting more pessimistic – for the first time since 2009, the unemployment rate two years hence is not expected to be below that in one year’s time. 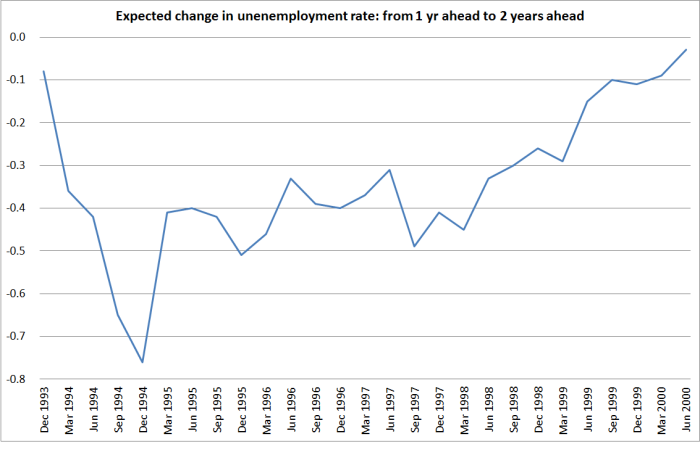 And finally, the one question where respondents were even more pessimistic than I was. Wage inflation expectations picked up coming out of the recession back in 2009/10 (and recall there are more business-affiliated respondents in this survey – it wasn’t just household aspirations), but have been going sideways, or falling, for the last few years. The survey asks respondents about expected wage inflation one and two years ahead. In big booms one expects to see the two year ahead expectation below the one year ahead one – intense pressure on wages now, but they will abate as the market equilibrates. And in deep recessions, one expects the reverse: very weak wage pressures in the near-term but some recovery in the medium-term as the market equilibrates. You can see that pattern in the chart, both pre and post 2008. 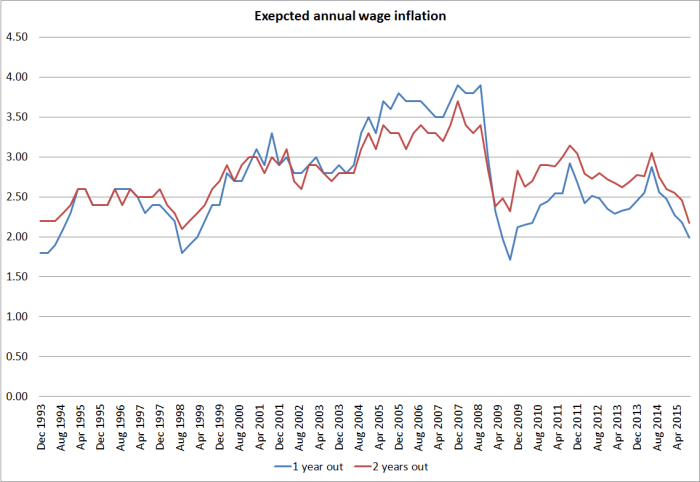 The respondents to these surveys might be quite wrong. But the sorts of people who fill in the Survey of Expectations are the sorts of people the Reserve Bank should be wanting to convince. Some of them are real decision-makers. Others might be, in Nigel Lawson’s memorable phrase, “teenage scribblers”, but they are the sort of people who pay more attention than most to this stuff. And they do not see any inflation pressures out there, at present or in prospect over the next couple of years.

Which brings us back towards monetary policy. Even after the first two cuts, the OCR is still around 50 basis points higher than it was at the end of 2013, even though inflation expectations – business and household – are probably 50 basis points lower than they were then. In other words, the Reserve Bank has substantially raised real New Zealand policy interest rates, over a period when markets tell us that real New Zealand long-term rates – the market’s view of what will be required over the next 15-20 years – have been falling. Perhaps that would have made sense if core inflation had been getting away on the Bank and it had needed to act fast to bring it under control. In fact, core inflation has just kept on being very low, surprising the Bank, and well below the target (and accountability) midpoint.

After the Governor’s speech, I posed the question of how the Bank hoped to get core inflation back to around 2 per cent, given its current very cautious approach to lowering interest rates.  Add in the lack of any confidence the Survey of Expectations respondents appear to feel, and the question is redoubled now.  It seems most unlikely that another 25 or 50 basis points of OCR cuts will be anything like enough –  cuts of that sort are already factored in to these survey responses,  And all this in a survey completed 2-3 weeks ago.  I suspect a survey done today might be a little more pessimistic still.

4 thoughts on “Does anyone believe core inflation is about to rise?”