Skip to content
HomeProductivity (lack of it) and other things

When I was writing some comments last week on Reserve Bank Deputy Governor Geoff Bascand’s speech in Australia I was playing round with some comparative data and stumbled on this chart. 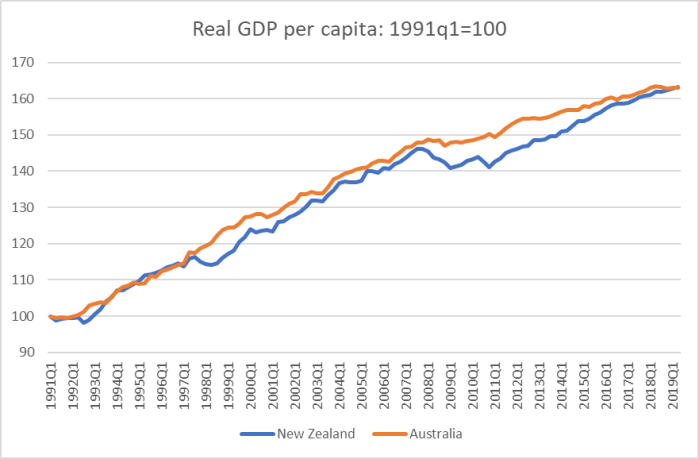 Over the entire period (since 1991) real GDP per capita has grown at exactly the same rate in Australia and New Zealand.   And I haven’t even cherrypicked the starting point: my chart starts when the SNZ quarterly GDP per capita series starts.

Of course, even in 1991 we were materially less well off than Australians, but should we take some comfort from having kept pace over now almost 30 years?  I’d say not.

Here’s why.   Look at the employment rates in the two countries 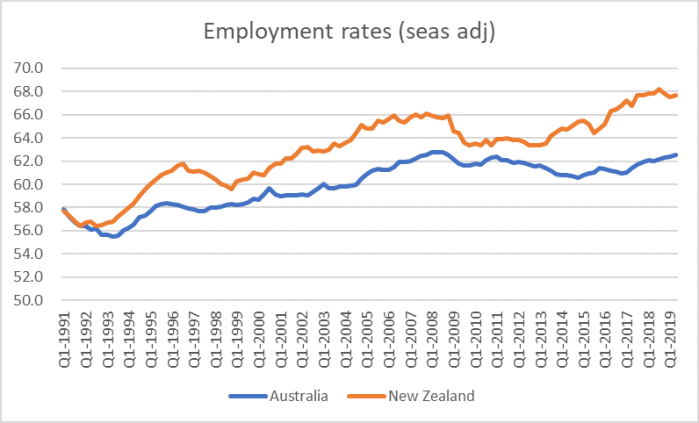 You might be among those who think the more employment the better but (a) working is a cost (an input) to the employee and (b) wouldn’t it have been much preferable, even if you think higher employment rates are some great thing, for it to have resulted in more growth in average per capita income than in the country where employment rates didn’t increase as much?   Australia’s unemployment rate is a bit higher than ours, and that is a mark against them, but it is only a small part of the difference in the employment rates.

And here is a chart that is perhaps even more stark. 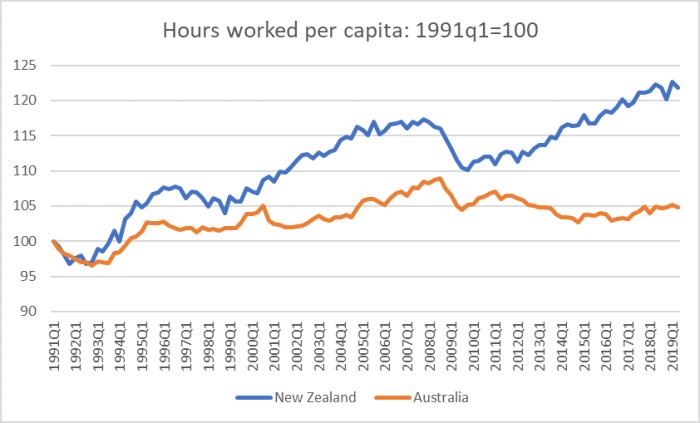 And yet the bottom line, growth in average real output per capita, is the same.

The difference is productivity – or, more specifically, in our case the lack of anywhere near enough productivity growth.

I’ve got other things on today, so that is it for original content.  But earlier this morning I was rereading my submission to the Reserve Bank consultation on the Governor’s plans to require large increases in bank capital.   There wasn’t anything in it I would now resile from.  I also skimmed through former colleague, and expert in bank capital modelling, Ian Harrison’s papers (here and here) and I doubt he would resile from anything in there.

But what remains striking is how little engagement there has been from the Governor on his proposals.    He has only given four on-the-record speeches this year, not one of which has involved a serious sustained attempt to make his case, let alone engage with alternative perspectives.  The only attempts I’ve seen to respond to alternative perspectives seem to simply involve suggesting that anyone who disagrees with him is somehow bought and paid for, and therefore their views aren’t worthy of serious notice or scrutiny.

At one level, it shouldn’t be surprising, given Orr’s personality and intolerance of challenge or disagreement –  and the fact that, formally at least, he doesn’t have to convince anyone but himself (since he is prosecutor, judge, and jury in his own case, and there are no rights of appeal). But as matter of good governance, in a democratic society, it reflects very poorly on him, on his handpicked senior managers, and on the Bank’s Board and Minister of Finance who are paid to hold the Governor to account but in fact act as if there role is to simply get out of the way and let the Governor get on with it, poor as the process and substance have been, poor as Governor’s conduct increasingly seems to have been.

An unbiased observer, looking at the New Zealand economy and financial system, would struggle to find a case for higher minimum capital ratios.   Among the factors such an observer might consider would be:

• The fact that the New Zealand financial system has not experienced a systemic financial crisis for more than hundred years (and to the extent it approximated one in the late 1980s, that was in the idiosyncratic circumstances of an extensive and fast financial liberalisation which left neither market participants nor regulators particularly well-equipped),

• Our major banks – the only ones that might pose any serious economywide risks – come from a country with very much the same historical record as New Zealand,

• Despite very rapid credit growth in the years prior to 2008 (increases in the credit to GDP ratios among the larger in the advanced world, spread across housing, farm, and other business/property lending), and a severe recession in 2008/09 and afterwards, the banking system emerged with low loan losses,

• Since then, banks have not only increased their actual capital ratios (and been required to calculate farm risk-weighted assets more stringently) but have also substantially improved their funding and liquidity positions (under some mix of regulatory and market pressure).

• Over the decade, bank credit growth (relative to GDP) has been pretty subdued and there has been little or no evidence (in, for example, Reserve Bank FSRs) of any serious degradation of lending standards.

• The balance sheets of the large banks remain relatively simple, and there has been no sign (per FSRs) of the sort of financial innovation that might raise significant doubts about the adequacy of existing models.

• In terms of the wider policy environment, government fiscal policy remains very strong, we continue to have a freely-floating exchange rate, and there has been neither legislation nor judicial rulings that will have materially impaired the ability of banks to realise collateral.

• And the Open Bank Resolution option for bank resolution has been more firmly established in the official toolkit (note that if OBR were fully credible then, in the absence of deposit insurance, there would be little case for regulatory minimum capital requirements at all).

• And repeated stress tests –  over a period when the regulator had no incentive to skew the tests to show favourable results –  suggested that even if exposed to extremely severe adverse macro shocks, and associated large price adjustments for houses, farms, and commercial property, not only would no bank fail, but no bank would even drop below current minimum capital requirements.

• There has been no change in the ownership structure of our major banks, or in the implied willingness of the Australian authorities to support the (systemically significant) parents of the New Zealand banks were they ever to get into difficulty.

Add into the mix indications that New Zealand banks CET1 ratios, if calculated on a properly comparable basis, would already be among the highest in the advanced world –  in a macro environment with more scope for stabilisation (floating exchange rate, strong fiscal position, little unhedged foreign currency lending) than in many advanced countries –  and there would be a fairly strong prima facie case for leaving things much as they are.

But the Reserve Bank’s consultative document – and associated material, including speeches and interviews – engages substantively with almost none of this context.

It is grossly unsatisfactory that throughout months of consultation the Bank has made no effort to illustrate how its proposals for minimum CET1 ratios and the associated floors around the calculation of risk-weighted assets, compare with those planned by APRA for the Australian banks.

Such an exercise should have been relatively straightforward, especially if the Reserve Bank had done what most New Zealanders might reasonably have expected, and worked closely together with APRA in formulating its proposals.  Of course, New Zealand is a sovereign nation and the Reserve Bank (regrettably) has final decision-making powers in New Zealand but:

• APRA has a considerably deeper pool of expertise, including at the top of the organisation, than the Reserve Bank of New Zealand,

• The nature of the risks in the two economies and markets is quite similar (including similar legal institutions, and similar housing markets),

• If anything there is a case for thinking that APRA minima would be ceilings below which New Zealand requirements for our large banks should be set (since we have the benefit of strong parent banks, and well-regarded supervisor of those banks, whereas the parents  – and parents’ supervisors – themselves are on their own, and we have also chosen to have the OBR as a frontline resolution option),

• For the institutions that might pose potential systemic issues in New Zealand, any substantial increase in capital requirements can reasonably be seen as an attempt to grab group capital for New Zealand.  Why not work these things out together?

The onus should, surely, be on the Reserve Bank of New Zealand to demonstrate – make the case in detail – why the New Zealand subsidiaries of Australian banks should be subject to more onerous capital requirements than the parents, and banking groups as a whole, are subject to.  But not once has the Reserve Bank attempted to make that case.

New Zealanders deserve better than they have had in the poor process and weak substance that together made up this consultation.

To which one can only add that the repeated reports  –  some of things in public, others less so –  of the way the Governor has handled himself, his own conduct, through this episode are deeply disquieting.  There is little sign of the sort of character and temperament we should expect from a senior public servant exercise so much barely-trammelled power.  The Minister of Finance may declare that he has full confidence in the Governor.  The public should not, and if the Minister continues to sit on the sidelines doing nothing but expressing full confidence that should probably raise more questions about the Minister himself.

Meanwhile, one wonders what our new Australian Secretary to the Treasury makes of her first encounters with national policymaking and advice.

2 thoughts on “Productivity (lack of it) and other things”