After an early morning with some boisterous visiting nieces and nephews, there is a certain calm retreat in getting back to some of the details of yesterday’s national accounts release.

I’ve written previously here about the investment numbers.  The state of investment spending is a useful, if never foolproof, indicator of the state of the economy.  Not so much in a mechanical adding-up sense –  a quarter of weak investment probably translates into a weaker quarter for GDP – as in the questions the data can pose about just what is going on more broadly, and the viable opportunities that businesses are finding, and taking up (or not), in New Zealand.

My typical starting point is a chart like this, breaking out investment spending into residential, government, and “business”.  (I put “business” in quote marks because, as the OECD does, it is calculated residually –  subtracting the other two components from total fixed capital formation.) 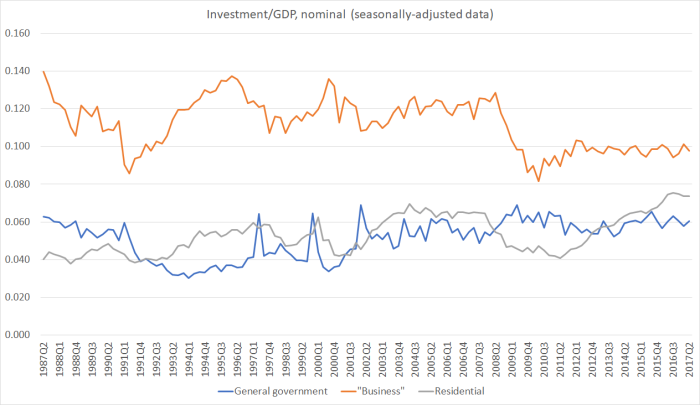 Using quarterly data means living with a bit of “noise”, but not that much, and doing so enables us to see if there are any material changes emerging at the very end of the series.

I don’t want to say much about general government investment spending.   In recent years, that share has been averaging a bit higher than what we saw in, say, the five years before the last recession.  Then again, government (central and local) has faced significant post-earthquakes repair and rebuild expenditure, and the population growth on average over recent years has been a bit faster than that in the previous decade.  If anything, one might have expected the government investment share would have needed to be a bit higher still, at least given the range of functions governments currently take on,

What of residential?   In nominal terms, residential investment spending (new builds and renovations etc) as a share of GDP is now just below the highest levels seen in the history of this series (and actually in the annual series which goes all the way back to the year to March 1972, thus capturing the peak of the building boom in the early 1970s).    Given the rapid rate of population growth –  a little higher, but lasting longer, than the growth rates 15 years ago –  one would expect to see a pretty high share of GDP being devoted to housebuilding and associated activities.   But you will notice that the residential line has fallen a bit in recent quarters, and consistent with that the volume of residential investment spending undertaken in the June quarter this year was about 1.4 per cent lower than such spending in the June quarter of last year.

In this post, my main interest is in the business investment component (the orange line in the chart).  Strip out the modest quarter-to-quarter fluctuations up and down, and there has been no real change in the share of (nominal) GDP devoted to business investment for almost six years now.   Over the six years, business investment as a share of GDP has been materially lower (around 2 percentage points of GDP) than the average for the 15 years or so prior to the 2008/09 recession.    That is a big change.    And doubly so because of the sustained acceleration in the population growth rate in the last few years (and with it growth in the number of jobs).  Workers typically need capital equipment, even if it is nothing more than a laptop (and associated software) and a place to work.

Ratios of nominal investment spending to nominal GDP aren’t the only sensible way to look at things. In particular, in New Zealand a lot of capital equipment is imported (eg vehicles and most machinery, but not buildings themselves).  A high exchange rate –  such as we’ve had in recent years, but also had to a lesser extent in the last few years of the 2000s boom –  tends to lower the price (in NZD terms) of capital equipment.  The volume of business investment might still be growing quite rapidly, even if the nominal investment spending share of GDP is pretty weak  (of course, for tradables sector firms the high exchange rate is no gain –  capital equipment might be cheap, but the expected returns to any investment are also dampened).

So here is a chart of the annual percentage change in real business investment.

These pictures don’t really surprise me.  They are what one would have expected once one knew of (a) the magnitude of the damage caused by the earthquakes (from day one  at the Reserve Bank we knew this was a large non-tradables shock, which would skew activity away from business investment, especially in the tradables sector, for several years), and (b) the scale of the population increase.   Those pressures have helped hold our real exchange rate up so much and for so long, and reinforced the persistent large margin between our real interest rates and those abroad.  In that sort of environment, total business investment (share of GDP) is less than it otherwise would be, and –  although it isn’t able to be illustrated here –  what business investment does occur will be skewed away from tradables sectors.   Not even very high terms of trade levels were enough to counter-act the downward pressure on business investment growth, and monetary policy held tighter than it needed to be didn’t help either.

Looking back at that first chart, the weak and almost dead-flat business investment line was reminiscent of the productivity chart I showed yesterday.  It is also consistent with the weak export performance I wrote about last week.  The three indicators are causally related: business operating in, or which might have contemplated entering, the tradables sector, and thus taking on the world, simply haven’t been able to find sufficient attractive and remunerative opportunities.

The pressures associated with post-earthquake rebuild expenditure will wane, and probably already are.  But meanwhile, policy continues, year in and year out, to supercharge our rate of population growth, bringing in huge numbers of modestly skilled people, to a location where the successful opportunities for firms to take on the world with great products and services seem to be growing much more slowly than the number of people living here.  The flawed policy –  shared across both main parties and several of the minor ones –  just keeps making it harder than it needs to be for New Zealanders as a whole to get ahead.   Our immigration policy was crazy when lots of New Zealanders were leaving each year, but it is even more deeply problematic when the travails of Australia’s labour market mean that the outflow has (probably temporarily) largely ceased.