Tyler Cowen wrote last night “Larry Summers on TPP makes perfect sense.  I haven’t seen anything on the anti- side coming close to this level of analysis, and in a short column at that.”

I’ve been a bit ambivalent about TPP, so thought that I’d better read the Summers piece.  My problem was that I came away more skeptical than I went in.

My own priors are pretty clear.  Free trade is good –  as a matter of liberty and as a means to greater prosperity.  I’m sure one can find exceptions, but the rule is a pretty good one to live, and make policy, by.

But then Summers tells us that:

First, the era of agreements that achieve freer trade in the classic sense is essentially over. The world’s remaining tariff and quota barriers are small and, where present, less reflections of the triumph of protectionist interests and more a result of deep cultural values such as the Japanese attachment to rice farming. What we call trade agreements are in fact agreements on the protection of investments and the achievement of regulatory harmonization and establishment of standards in areas such as intellectual property. There may well be substantial gains to be had from such agreements, but this needs to be considered on the merits area by area. A reflexive presumption in favor of free trade should not be used to justify further agreements. Concerns that trade agreements may be a means to circumvent traditional procedures for taking up issues ranging from immigration to financial regulation must be taken seriously.

But if free trade is good, the same case can’t be made for “regulatory harmonisation”.  We just don’t know enough about what regulation is sensible, and worthwhile, and we live in democracies where the case for regulation in specific areas should be fought out through domestic political processes.    A diversity of regulatory approaches is often the way we learn.     And protections for intellectual property are typically far too high anyway –  in other words, agreements on such matters risk being (or are by design) generally anti-competitive, anti-market, measures.

In fact, the strongest argument for TPP I could find in the article was one grounded in domestic US politics ( recalling that Summers had been a senior official in both the current and previous Democratic administrations).

The repudiation of the TPP would neuter the U.S. presidency for the next 19 months. It would reinforce global concerns that the vicissitudes of domestic politics are increasingly rendering the United States a less reliable ally.

Really?    We all know that second-term US Presidents, especially those whose Vice-President is not heir presumptive, quite quickly become lame ducks.  Is this presidency really any different?  And where is the pressing demand for TPP?  No doubt there are elites in each of the negotiating countries with a great deal at stake, but where is the popular demand for this agreement?  As Summers puts it, it doesn’t seem to be a free trade agreement anyway.  Which population centre will think worse of the US if negotiations stall?    No doubt some US business groups will be aggrieved, but that is domestic politics, not international relations.  Failure of TPP would be embarrassing for Barack Obama, but that seems less like a national interest issue than a partisan one?

I’ve long been a bit puzzled by what was supposed to be in any deal that would make it economically worthwhile for New Zealand (as distinct from being “inside the club”).  I recall the IMF doing some modelling a decade or more ago on the US-Australia FTA, which had concluded that that agreement had been modestly welfare-diminishing for Australia –  as if a desire for a deal, any deal, and perhaps the momentum that any  process takes on over time had overridden a hard-headed assessment of the economic interests of Australia.   If there were genuine large-scale liberalisation of the global dairy trade, then we might reasonably think New Zealand would be better off from a deal.  But has that ever seemed very likely?  And if only small (or no) trade gains are on offer, how should we weigh that against the losses from strengthened intellectual  property protections?

And how should be think about the incentives on our key political participants?  Having pursued an agreement for so long, what sort of threshold would have to be crossed before they would be willing to walk away from negotiations?  It is not clear that the personal and national interests are necessarily tightly aligned.  Perhaps the US Congress will  vote in ways that mean they never have to make that decision.

To repeat, I’m a free trader.  I think New Zealand should have removed its remaining tariffs, and wound back its anti-dumping regime, long ago.  I’m in favour of a materially more liberal approach to foreign investment.  And I generally favour less regulation rather than more.  But all these are causes that should be fought out openly, and in the domestic political process.    So, I hope there is a better case for TPP than that put forward by Larry Summers, who actually seems somewhat ambivalent if it weren’t for the impact on Obama’s political position, but so far I haven’t found it.

And that before I saw Keith Woodford’s recent column on interest.co.nz.  Woodford knows a great deal about the global dairy industry, and he makes what seem like pretty persuasive arguments that there might not be much in it for New Zealand even if the US and Canada were to move towards an unsubsidised and less heavily regulated dairy industry.

Last week, I started showing a few charts about how New Zealand had done against various other advanced economies since 2007, the last year before the recession that engulfed most of the world in 2008/09.

Today I’m going to show the charts for investment and national savings, using the data from the IMF’s WEO database. 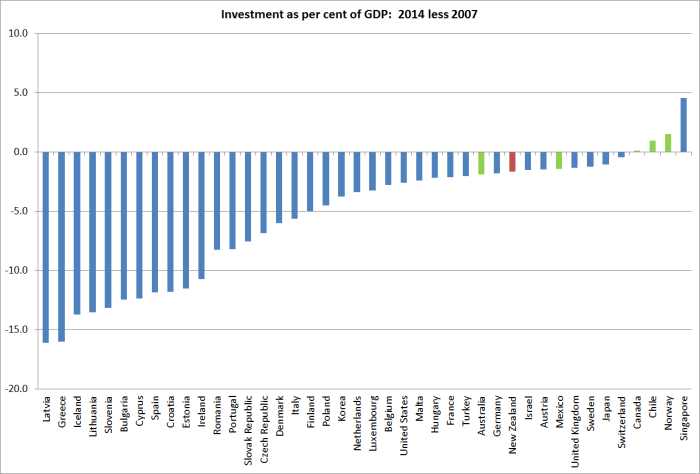 Of this group of advanced countries, only four had a share of investment in GDP higher in 2014 than it was in 2007.  That probably doesn’t come as a great surprise.  2007 was a cyclical peak, and by last year hardly any of these countries would have been considered to have been operating at capacity.  Across the advanced world as a whole, population growth rates are falling, and lower rates of population growth mean less of GDP needs to be devoted to investment for any given level of technology.

But my main interest was the cross-country dimension.  Perhaps unsurprisingly, the commodity exporting advanced economies have all been among the countries with the most strength in investment.  But Germany comes between Australia and New Zealand, and I was surprised to find the United Kingdom, Japan, and Sweden doing better than either New Zealand or Australia.  At the other end of the chart, the 18 weakest economies all either use the euro, or have a currency pegged to the euro.

The New Zealand story itself is a little less favourable than it might first appear. Recall that I noted last week that there had been no sign of a surge in New Zealand business investment in response to the high terms of trade.  And, on the other hand, a significant amount of the strength in New Zealand’s investment in the last few years has been the repair and rebuilid activity in Canterbury.  It counts as gross investment but, since it is mostly replacing capacity that was destroyed or severely damaged, it isn’t adding much to the capital stock. 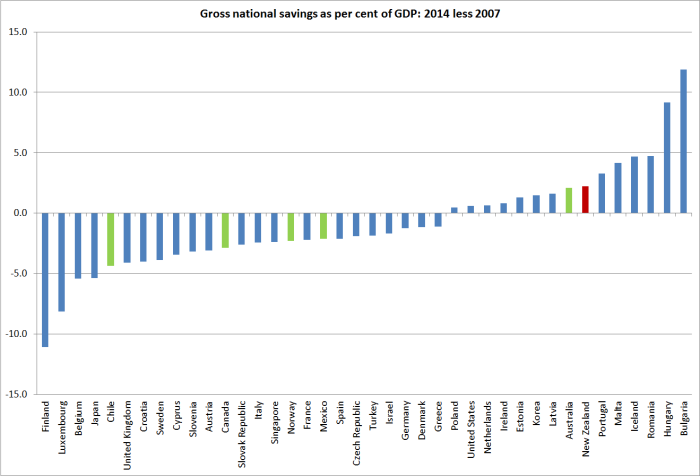 Before anyone starts getting excited about, for example, the impact of Kiwisaver, I should point out that when I compared savings rates for 2008-14 as a whole with those for 2001-07,  New Zealand dropped right back to around the middle of the chart.  Unlike the median advanced country in this sample, New Zealand’s national savings rate fell away sharply in the middle of the last decade, as public (and business) savings rates dropped away sharply.   Our national savings rate is only now back to around the level seen in the early 2000s.