On Friday, I took the Conference Board’s productivity data and looked at how New Zealand had done  on TFP growth relative to other advanced countries since 2007.  “Not that well” was the short answer.

The disappointing performance does need to be kept in some perspective.  New Zealand’s productivity growth has been disappointing for a long time. The Conference Board publishes TFP data only back to 1989.  However, a couple of years ago, some IMF researchers were given access to some unpublished Conference Board TFP data back to 1970.   Of the countries they looked at New Zealand had had the slowest TFP growth over the full period 1970 to 2007, and had grown more slowly than the median country in each of the four sub-periods they looked at.

Against that background, our slower than median TFP growth since 2007 perhaps looks slightly less discouraging  (not much less, given the decades of underperformance we might one day hope to start reversing). 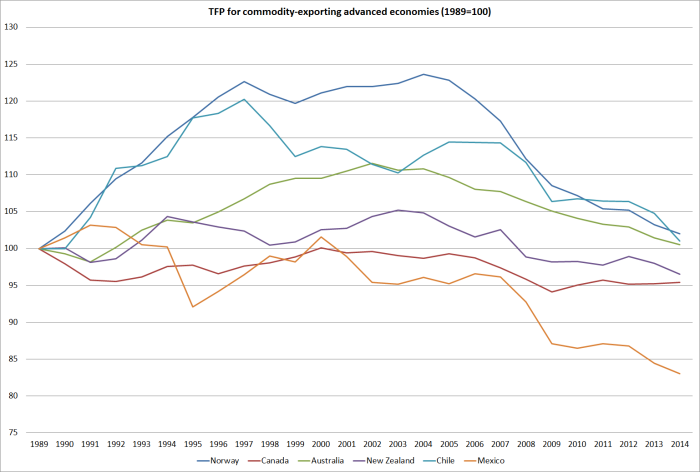 Weak TFP growth is not always and everywhere bad.  High commodity prices encourage producers of commodities to adopt different profit-maximising production techniques.  For example, poorer ore grades become economic to mine, but to do so takes more inputs.  That shows up as a fall in TFP, but presumably an increase in industry profitability.  In addition, massive investment programmes (as in Australia) to take advantage of high commodity prices do not boost output in the short-term (a project can take years to put in place), but involve the application of more resources to the industry.  That will also show up as lower TFP.    What about New Zealand?  We have not seen a business investment boom in response to the stronger terms of trade, but the dairy industry has altered its production processes, with more supplementary being used to produce more milk per cow.  Those choices were profitable, and sensible from the farmer’s perspective, but at the margin they involve using more inputs for each additional unit of output.  That shows up as a fall in TFP.

Quite how much these factors explain is debated , and requires a much more in-depth analysis of the national data to answer with any confidence.  But in New Zealand’s case, TFP is agriculture had flattened off well before the rise in the terms of trade, which didn’t really begin until around 2004.