A couple of comments from politicians caught my eye recently.  In his pre-Budget speech the earlier in the week the Prime Minister commented on the “One of the unsung success stories of the last few years has been the resilience of our exporters in the face of a high Kiwi dollar”.  And Steven Joyce was talking of revising the government’s target for exports/GDP, to take account of the revisions to the national accounts last year.

The idea of an exports target is an odd one.  I’d go so far as to agree that a high-performing New Zealand economy is likely to be one with a rising share of exports, as New Zealand firms successfully develop products that sell well not only (perhaps not even) at home, but in the much bigger world market.  It isn’t that exports are special, but that ability to export successfully is often – not always (think export incentives/subsidies) –  a marker of something going well.  Again, we don’t export for its own sake, but stronger exports provide the incomes that support New Zealanders’ ability to consume the wide range of products and services the rest of the world has to offer. 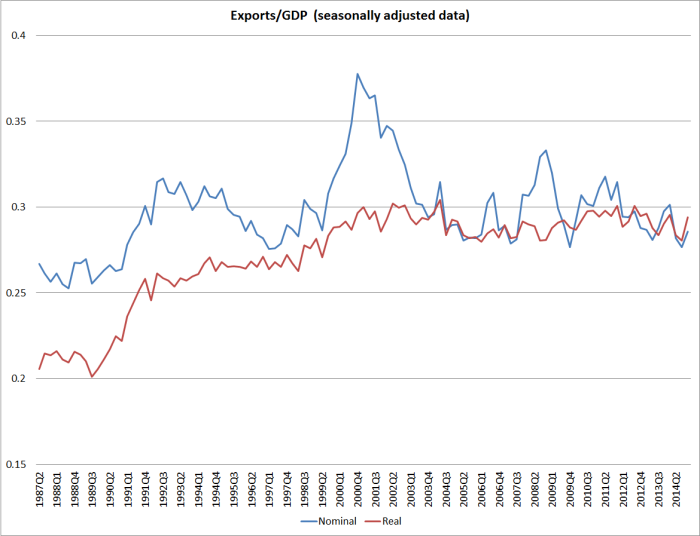 The chart shows two lines.  The first is nominal exports/nominal GDP, which is a reasonably economically meaningful measure.  The second is real exports/real GDP.  In my discussions with them over the years, Statistics New Zealand people tend to discourage using ratios of real variables, especially as measures of change over time.   Since nominal exports are thrown around (a lot) by commodity prices and exchange rates, there can be some limited information in this real ratio.  But not a lot, and not as a basis for a government economic target.  But the government’s target is apparently expressed in real terms.

So what has happened to these New Zealand ratios?  Exports as a share of GDP were rising in the 1970s and 1980s (my chart uses the current quarterly national accounts, which unfortunately go back only to 1987 but one can see the older trends in OECD data).  But that rise came to an end a long time ago.  In nominal terms – actual exporter receipts as a share of actual nominal GDP – we’ve gone nowhere for almost 25 years.   In most advanced countries that export share expanded.   If the exchange rate remains around current levels –  as many commentators seem to think – New Zealand’s nominal export share is likely to drop further this year (perhaps the counterpoint to the brief surge in 2000/01 when the exchange rate was at its lowest)   For what it is worth, the real ratio has now gone nowhere for 15 years.

World trade growth has been pretty subdued since around 2007, but a lot of that has been about China, allowing its currency to appreciate and markedly shrinking the export share of its economy.  Most – like the government – think that transformation of the New Zealand economy is likely to involve a larger export share, but there is no sign of it happening.

Of course, the higher terms of trade made New Zealanders better off even if export receipts as a share of GDP haven’t risen.  Imports are cheaper, and we can consume more of them.   But if higher world export prices have been (more than) totally neutralised by the higher exchange rate, there isn’t much incentive for firms in the tradables sector to invest more heavily in developing offshore markets, or expanding production capability.

Sceptical as I am of the exports target, the broad sentiment behind it is roughly in the right direction.  But there is not much sign of policy aligning in ways that would materially lift the competitiveness of New Zealand firms; the only sustainable way to help bring about the sort of lift in exports the government claims to be pursuing.