Thanks to Eric Crampton for his coverage. Eric suggested that my slightly gloomy take on New Zealand’s 5.7% unemployment rate needs to be tempered by recognising that the labour force participation rate is rising.

Participation rates have been rising here, and in most of the OECD. New Zealand doesn’t really stand out (from memory, the increase in our unemployment rate is also middle of the pack).  One caveat is that the chart shows the 15-64 participation rate.  I couldn’t quickly find the quarterly OECD data for the whole 15+ population, but when I looked at it a few weeks ago New Zealand was a little further up the rankings.

Two other things struck about the data in this chart:

The latest New Yorker was in the mail yesterday.  An article by Evan Osnos on Xi Jinping, subtitled “How Xi Jinping, an unremarkable provincial administrator, became China’s most authoritarian leader since Mao”, is fascinating reading, and recommended for anyone with an interest in China.  It is unflattering picture of China’s new(ish) leader, who is widely seen as primarily focused on consolidating power for himself and for the Party – a Party regime that drove his own sister to suicide. That he is no Gorbachev would no doubt be seen by colleagues as perhaps the key point in his favour.

The article doesn’t deal much with economic developments.  Xi Jinping came to power at the end of one of the bigger credit booms in history.  Not all credit booms end disastrously, but few end well.  And China’s since 2008 was far more state-led, with fewer market disciplines, than most.  Credit booms often go hand in hand with a marked appreciation in the real exchange rate, and China has had that too.    Quite where China goes from here is hard to tell.  Macro policy is being eased, as in other countries last decade, but even very deep cuts in interest rates in other countries haven’t been enough to produce robust recoveries in most.  And in China real interest rates appear to be rising not falling, and the real exchange rate is still rising.  What happens in China matters a lot for the world economy, especially when most other countries have so little “policy space” left, and growth in other emerging economies is also slowing.

But the article got me thinking about China’s longer-term economic performance.  What has happened over the last 35 years has been remarkable, but mostly because of its global implications.  I’m struck, however, by how underwhelming China’s performance has been in some key respects.

My benchmark is the other Chinese countries/territories – Hong Kong, Singapore, Taiwan – with a quick glance as well at the two non-Chinese rich democracies of Asia, Japan and South Korea.  I’m drawing data from the Conference Board’s Total Economy Database, spliced where necessary with the (common origin) Angus Maddison data.

China is a middle-income country, with real GDP per capita in 2013 not that different from those in Jamaica, Brazil, and Iraq.  The other Chinese countries/territories aren’t. 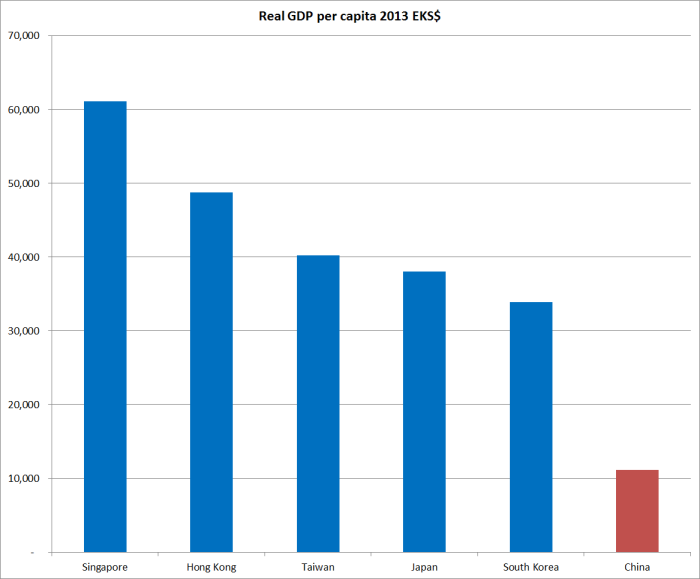 Things start getting a bit heroic with long-term growth rate comparisons, but China’s growth in per capita income over the last 100 years (1913 is one of Maddison’s benchmark dates) doesn’t look particularly impressive either.  China is estimated to have been the poorest of these countries/territories in 1913, and so had the most room for catch-up/convergence growth.

And if one other measure of success is how many people can share in the prosperity, China’s population has also grown much less rapidly than those of the other Chinese countries/territories over the last 100 years.

All these comparisons are somewhat fraught.  The historical data aren’t great, but they are what we have.  Americans often argue, when faced with success stories in small European countries, that these things may not be replicable on continental scale, but equally New Zealanders are familiar with arguments about the potential costs from small size.  And China has done it before –  they were at the forefront of innovation, with the highest living standards, perhaps 1000 years ago.

If there has been some catch-up in the last 35 years, over the last 100 years taken together growth in living standards in China appears not to have kept pace with growth in other places with populations of similar ethnic and cultural backgrounds –  but which have allowed a greater role for markets, and the rule of law.    And the people of China have had to put up with much greater political repression, much higher levels of corruption, persecution for religious beliefs, and the evils of the one-child policy, not to speak of the disaster of Mao’s Great Famine.  It seems a lot like a lose-lose for most of the Chinese –  but not perhaps for the Party bosses.