The Reserve Bank has been out consulting, I think for the third time, on proposals to differentiate clearly, in bank capital requirements, between loans for investment properties, and loans to owner-occupiers.   I made a fairly short high-level submission on their consultation document.  It is here:

The thrust of my argument is “case not proven”.  The Bank argues that, for otherwise similar borrower/loan characteristics, loans for investment properties are materially more risky than those on owner-occupied properties.  But they present surprisingly little data –  none from New Zealand, since we’ve had no material housing loan losses since the 1930s –  and what data are presented are largely taken as is, with no attempt to think seriously about how the New Zealand investor property market might be similar to, or different from, those in other countries.  In particular, the longstanding prevalence of small investors  –  which arises because our tax system treats them fairly neutrally with other potential holders –  is different from countries that often have large corporate holders of residential properties, and perhaps a rush into buy-to-let by individuals very late in the boom.

The Bank is quite open about the fact that its proposals would facilitate the imposition of eg a investor-specific LVR speed limit.  That is presented as an advantage, but as they have not consulted on the benefits and pitfalls of such a further intervention –  on top of the avowedly temporary initial LVR limit –  it cannot be considered as a public benefit at this stage.  The latest iteration of the proposals has the feel of something more focused on making an investor speed limit work, than on remedying material deficiencies in the New Zealand bank regulatory capital framework.  New Zealand already has among the very highest risk weights on housing loans of any advanced countries and, as the Reserve Bank has recently acknowledged, international experience is that housing mortgages are rarely central to even very serious financial crises.

I noted in passing the other day that real economic performance across the advanced world had been so bad recently that comparing 2014 against 2007 would not look so different from 1936 vs 1929 comparisons.

Data, of course, are a problem.  But I went to the OECD databases and got their PPP estimates for annual per capita real GDP.  They have 2014 numbers for only around 60% of the member countries, and for the others I simply updated the 2013  numbers with some plausible guesses.  Here is total growth in per capita GDP for each of these countries since 2007. 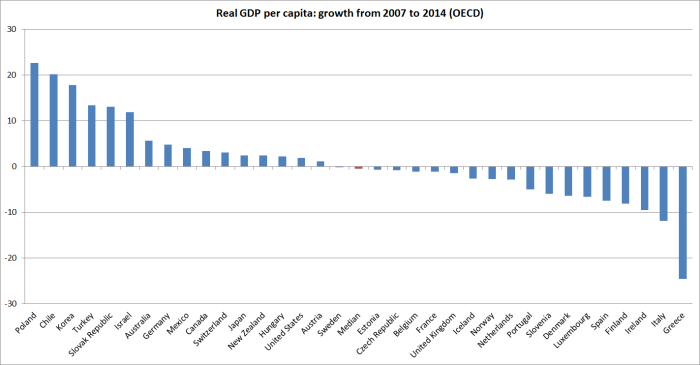 The median OECD country has had no per capita growth over those seven years.

Angus Maddison’s estimates are the standard resource for looking at earlier periods.  He has estimates for most of the current OECD countries, and the chart below shows total growth in real per capita GDP from 1929 to 1936 ( also a seven year period). 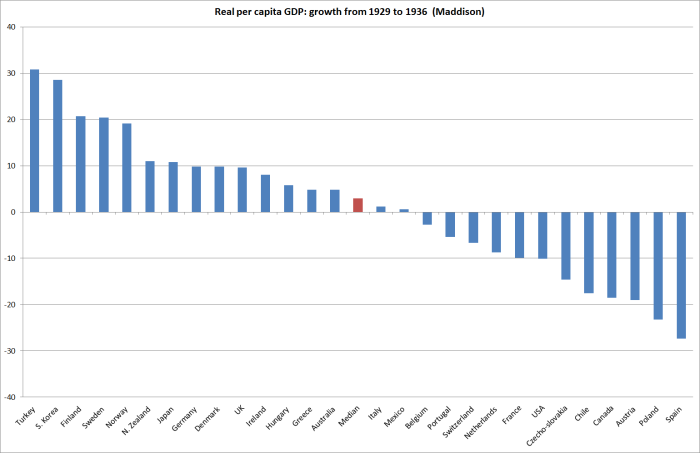 I wouldn’t want to make too much of these comparisons.  Data for the early period are unofficial, but careful, scholarly estimates, and data for the more recent period are still subject to considerable revisions.  Maddison used 1990 prices –  far distant in time from the 1930s, and even the OECD numbers use 2005 prices.  For individual countries prone to terms of trade fluctuations, those choices around prices can matter.  But we can only use the data we have.

The point isn’t to say that the most recent period has been as bad as the Great Depression – in most countries, the slump in the early 1930s was much deeper,  both in output and in employment (although the recoveries were also faster).   But  recent outcomes have been very bad  – across a group of 30 or so advanced countries, to have little or no growth over seven years has no peacetime precedent outside the Great Depression.  The Great Depression was, with hindsight, a failure of demand – TFP growth in the US, for example, was very strong during those years.  Perhaps it is different this time, and the limits of innovation were reached some time ago.    But I’d be reluctant to bet on it, when inflation is so low and the near-zero bound on nominal interest rates appears to have become an increasingly binding constraint.

It is well-known that real GDP per capita in almost every advanced country is now well below the pre-recession trend.    Perhaps it will stay permanently lower.  But it is worth reminding ourselves of the US experience.  Estimates of real GDP per capita have stayed pretty close to a fairly constant trend for 150 years.  Two episodes looked like they might foreshadow material deviations: the last few years, and the 1930s. 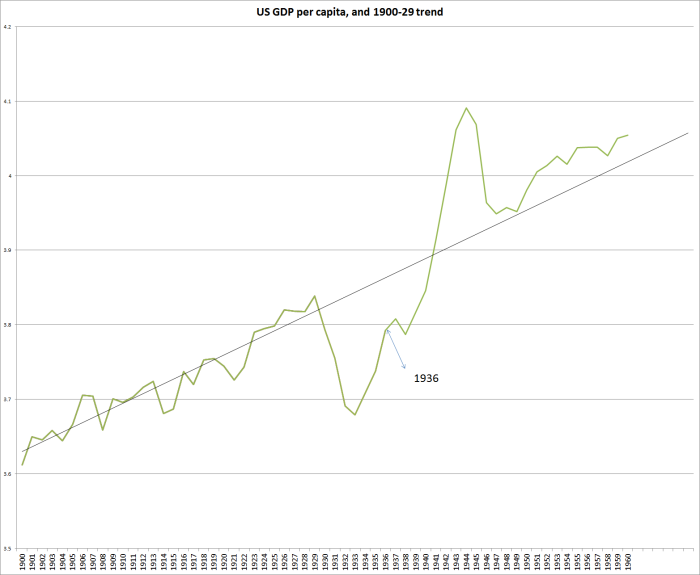 By 1936 US real incomes had been recovering strongly for a couple of years, but were still well below pre-Depression trends.  Many probably judged those to be permanent losses, and by 1936/37 the authorities were comfortable with tightenings in both fiscal and monetary policy.  But, in time, real per capita GDP came right back to something around the pre-Depression trend.  Tighter macro policies probably only slowed the rate at which people got back to work.