The Productivity Commission has been working on a report on state sector productivity, commissioned by the previous National-led government.    I’m not sure that everyone simply working harder was quite what they had in mind.

But judging by the number of written parliamentary questions lodged in the less than three weeks since the opening of Parliament, National Party MPs (and their research assistants) seem to be generating outputs at a record rate.   Outcomes –  the real focus surely –  might be another matter.

Parliament publishes an accessible record of all written parliamentary questions asked since 2003.   Here are the annual totals. 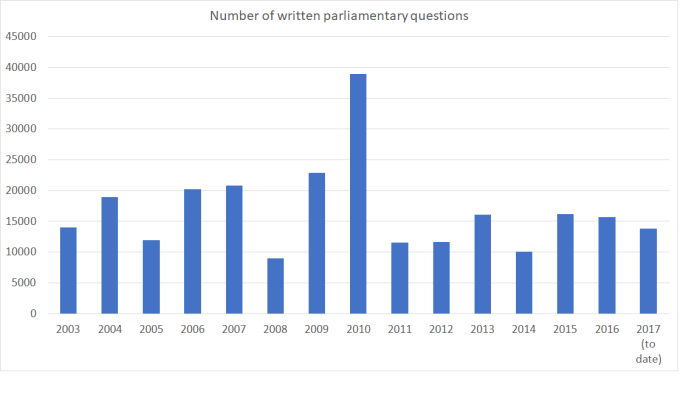 The Opposition (largest component being the Phil Goff-led Labour Party) was particularly active in 2010, lodging almost 40000 questions that year (almost all written questions are lodged by Opposition MPs), but in the average year around 17000 questions were asked.

It is an interesting contrast to the Australian Parliament, where a fact sheet records that on average in the last Parliament only 11.6 questions per sitting day were lodged.   Perhaps incentives matter:  in New Zealand, all written questions have to be answered, and within six working days.  In Australia, by contrast, there is no time limit.

In that earlier chart there is nothing unusual about the 2017 numbers.  At the moment the total is a little below average, but there are still four more working weeks of the year.  And here is a chart of the monthly totals back to just prior to the 2014 election. 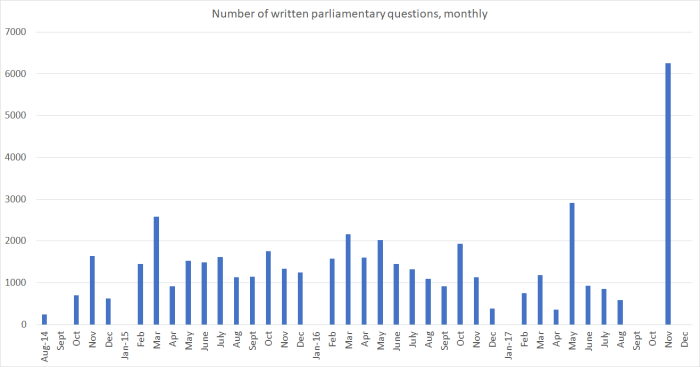 There are some zero months: around elections when Parliament itself is dissolved, and the Opposition parties seem to have given themselves (and those who have to answer the questions), a complete break each January.

But look at that total for November 2017: 6254 questions asked already.  The first question wasn’t asked until 8 November and it is only 25 November now.   With four more working days to go, they could yet hit 10000 questions for the (partial) month.   At anything like this pace, the 2010 record will be blown out of the water next year.

But one does have to wonder to what end?  The line from Macbeth “sound and fury, signifying nothing” was springing to mind, perhaps (one would hope) unfairly.

Every one of these questions –  even the really mundane ones –  have to be processed, by the Clerk’s office, by the relevant Minister’s office, and possibly by a government department.  Each one needs an answer prepared, and then submitted back through the system for approval and then lodging for reply.

What reports, briefings, memos or aide memoires did the Minister receive on 23 November 2017?

What meetings did the Minister attend on 23 November 2017?

What meetings did the Minister decline on 23 November 2017?

What events did the Minister attend on 23 November 2017?

What events did the Minister decline on 23 November 2017?

And the previous day he asked the same five questions about the 22 November. And the Minister of Statistics doesn’t actually do very much at all.  From what I could see, not a single one of the 147 questions was substantive.

Now I’m all in favour of open government.  I reckon Parliament itself should be subject to something like the Official Information Act, and there is a good case for making the diaries of ministers open (sunlight being a good disinfectant against undue influence etc).

But quite what is being gained by interminable questions of this sort (when there is presumably no suggestion of any particular inappropriate conduct)?   They aren’t all diary questions of course.  Shane Reti, another National MP, has 587 questions to his name.  A sample includes from yesterday.

Will the Minister commit to visiting NorthTec Rawene Campus in the first 100 days of office?

When was the last time the Minister visited the NorthTec Rawene Campus?

It all has the feel of a rather expensive fishing expedition in the expectations that if they ask enough questions something will turn up somewhere about something.  Another phrase for it might be “sheer waste of taxpayers’ money” (something perhaps the Taxpayers’ Union could get interested in.)  When people set out in pursuit of a political career, with the typical high-minded aspirations such people have, did they really think this is the sort of activity they’d be reduced to?

Meanwhile, I’m sure the public service (and ministerial staff) are fervently hoping for a breather in January.  But I’m not sure I like their chances.

UPDATE:  This post by Graeme Edgeler changes my impression somewhat.