I was going to write about something quite different this morning but I noticed an article by Bernard Hickey suggesting that the presence of a capital gains tax in Australia, and tighter restrictions there on foreign ownership of residential property, explains a substantial difference in performance in the two housing markets, across decades and over the last few years in particular.

Hickey starts from this chart, using a helpful tool The Economist makes available for comparing house price inflation across countries. 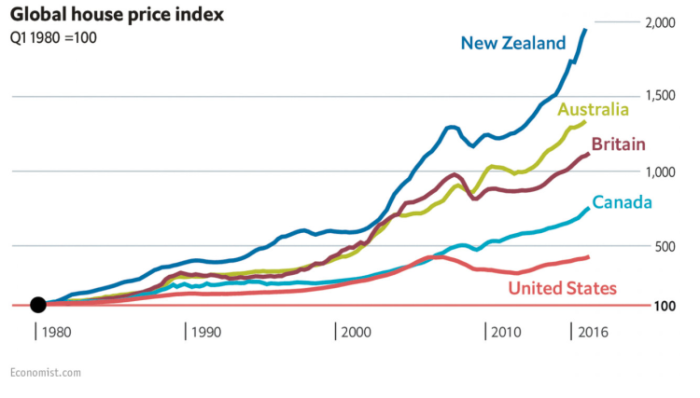 But (a) this is a chart of nominal house prices and everyone knows we had much more general inflation than these countries early in the period, and (b) 1980 marked near the trough of a savage correction in New Zealand real house prices (down around 40 per cent over five years or so, as the New Zealand economy went through some troubled times and the exodus of New Zealanders to Australia (not then offset by increases in other immigration) began).   1980 is the starting point The Economist uses, but it isn’t where I’d be starting looking for evidence of the contribution of Australia’s CGT and foreign ownership restrictions.

Australia’s capital gains tax came into effect in September 1985.  The restriction on foreign ownership of residential properties was already in place, but no one thinks that was a material issue in Australia at the time (either there, or here).    Rising concerns about non-resident foreign ownership (actual or potential) of residential dwellings –  especially in New Zealand –  have mostly been an issue for the last five years.

So how have real house prices in the two countries behaved since September 1985, when Australia introduced the CGT?  Using the same Economist  database – which has data only up to the end of 2016 – this is the resulting picture.

Over the whole period, New Zealand house prices have increased just slightly less than those in Australia.

Of course, over just the last few years New Zealand real house prices have increased more than those in Australia.  Capital gains tax provisions haven’t changed materially in the two countries, although we did impose the bright-line provisions (on re-sale within two years) in 2015, and Hickey notes that Australia “removed the exemption from its capital gains tax for the main home for overseas investors in this year’s budget” (beyond the end of the data in these charts).

Perhaps the differing approaches to non-resident non-citizen purchases of existing residential property have played a part, at the margin.    We’d need a much more careful study to know, and it may never be possible to conclusively answer the question.  But recall –  the point I made yesterday –  that banning, or taxing, non-resident purchases of existing dwellings does not stop such purchasers buying new properties, or does not remove any of the road-blocks that stand in way of increased supply, of urban land in particular.  In both countries, land price inflation is by far the largest component of urban house+land inflation.

Personally, I’ve got a different candidate explanation for why house price inflation has been stronger in New Zealand just in the last few years than it was in Australia: our population growth has simply been much faster.

Those are huge swings –  both in New Zealand’s own population growth rate, and in that growth rate relative to Australia’s population growth rate.     You might think that rapid population growth is a fine thing –  as people at the New Zealand Initiative (probably) do –  or a deeply problematic one, as I do, but no serious observer is going to dispute that when you have the sorts of land-use restrictions that both New Zealand and Australia do, big unexpected changes in population growth will, all else equal, quickly spill into higher house prices.  They did in Australia around the post-recession peak mining investment boom years, and they’ve done so here in the last few years.     Over longer periods of time, the two housing markets look (depressingly) similarly bad.

To be clear, I’m not suggesting that idiosyncratic tax or (eg) credit-restriction changes have no effect on housing market in the short-term. Australia has tinkered with its CGT, we’ve altered depreciation rules, ring-fencing rules etc, and we’ve put up and lowered again our maximum marginal tax rates (all things potentially relevant for investors).  I’m also not suggesting that large enough changes in the foreign buyer rules will have no effect in the short-term.    But the New Zealand and Australian experience over decades suggests that such effects don’t last for very long (and any permanent effects are pretty small), that the similarities in the two markets are much more important than the differences,  and the toxic brew of tight land use restrictions in the face of policies that drive up the population rapidly are a more compelling part of the story in both countries.    Relative economic cycles aren’t always in synch, and waves of intense population growth occur at slightly different times but the divergences in relative housing market performance never seem to have last for very long.   And are unlikely to, unless one or other set of governments sets about seriously fixing the land-use rules (and/or materially pull back on the policy contribution to population growth and housing demand).

Even the government seems to agree.    Asked about the foreign buyers ban the other day, David Parker noted (according to a record of press conference I saw) that “the impact on the number of houses built in New Zealand will be negligible”, and suggested that any price effect now would be pretty modest too.