One subject that seems destined to get little attention in the current election campaign is the appropriate tax rate to be applied to business income.  As I’ve noted previously, our company tax rate is now in the upper third of those in OECD countries.  And if there is any discussion at all in this campaign, it seems more likely to centre on plans to raise more money from companies –  foreign companies anyway.   The government has just announced measures designed to have that effect, and parties on the left seem keen on doing even more, under the cover of OECD-coordinated moves in that direction.

I was talking to some tax people yesterday, which prompted me to dig out the OECD data on company tax rates and company tax revenue.  Both matter.  A country can have quite a high statutory headline company tax rate but also have so many exemptions, deductions etc, that the company tax doesn’t actually raise that much money.  The United States is a good example –  the general government corporate tax rate is 38.9 per cent, the highest in any OECD country, and yet corporate income tax receipts are only 2.2 per cent of GDP, well below the median OECD country.  Corporate tax reform is well overdue in the United States (although my money is on nothing very fundamental happening in the current presidential term).

What about New Zealand?

Here is a chart, using OECD data, showing company tax receipts as a share of GDP for New Zealand (blue) and for the median OECD country (orange), all the way back to 1965.

We take a much larger share of GDP in company tax revenue than most OECD countries do.  In fact, in recent years, the only countries that have taken a larger share have been Australia, Chile, Norway, and Luxembourg.   Given the importance of minerals in the first three of those countries, the company tax receipts may include a large chunk of what might be better described as resource rentals  (and in addition production processes in those extractive sectors tend to be quite capital intensive).

But several other things struck me:

But it does leave me with at least two questions:

In the earlier decades, a heavily protected economy probably meant a business sector that was ripe for the (headlines of) plucking.    Between the non-tradable service sectors and the highly-protected manufacturing sector, there was plenty of scope to pass increased business costs, in the form of high headline business taxes, on to domestic consumers.  The export sector was mostly based around family farms –  and probably didn’t pay much company tax.  But bear in mind that exports as a share of GDP were shrinking through this period – high internal domestic costs (including business taxes) also help to erode competitiveness.

These days the economy is much less protected, but we are still back to taking a much larger share of GDP in company tax than most other countries do.  Many of our biggest tax paying firms are foreign-owned  (apparently around 40 per cent of all company tax revenue is paid by foreign-controlled firms), which command little public sympathy or support.  The Australian banks are perhaps the most prominent example.   Perhaps it looks like a “free lunch” to tax heavily such operations?

(In principle, our dividend imputation system  –  also adopted in Australia –  may act to make people more relaxed about conducting business through a corporate vehicle, since for domestic shareholders there is no double-taxation of dividends.  I don’t know whether this will be part of the explanation, although I’d be surprised if it explained much, given the other advantages of limited liability.) 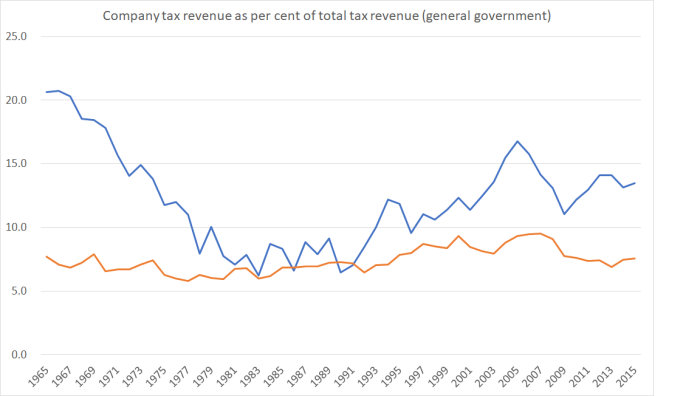 Our heavy reliance on company tax revenue looks to be a deliberate choice to favour that soource of revenue.

Whatever the reason for why we take such a large share in company tax, it seems unlikely to be a sensible element of a successful economic strategy.    It is well-known that business investment as a share of GDP has been quite low in New Zealand for many decades.  It is one of the more obvious symptoms of our economic underperformance.  We also now have a quite moderate level of inward foreign investment.  It seems at least plausible that the tax regime might be one part of the explanation –  after all, particularly for foreign investors, the choice to operate here (or not) is purely an economic one, influenced largely by the expected after-tax returns, and the risk around those returns.   For foreign investors (who can’t take advantage of imputation credits) the New Zealand company tax rate should matter a lot.    Partly for that reason, the estimated deadweight costs of business taxation are far higher than those for most other taxes. You get less of what you tax, and foreign investment is likely to be particularly sensitive to taxes.

The OECD data on company tax rates does not go back as far.  But here is how our rates have compared to those of:

In much of the debate around these issues, all the focus is one who writes the cheque, not on who actually bears the burden of the tax (the incidence).  Foreign investors, for example, will have target after-tax rates of return.  Higher tax rates discourage reinvestment in the business, discourage new investment, and in time result in lower average productivity and lower wage rates.    By contrast, lowering business taxation is a pro-growth, pro working people, policy.

Again, there is a tendency to discount this point with a response along the lines of “look at all the existing investment; cut taxes on the profits on those businesses and it is just a windfall transfer to existing owners”.     That often seems particularly unappealing if the owners are foreign –  as if it was a pure welfare loss to New Zealanders.     The banks are good example of what bothers people –  mostly owned by big Australian operations.  But actually, the banks are a sector where lower tax rates offer the prospect of genuine savings across the board, for all users of financial services in New Zealand, even if the size of the banking sector itself doesn’t change much.   Cut taxes on banks’ profits and, over time, you’ll find fees and interest margins falling.  Not from the goodness of a bank’s heart, but from the competitive process at work, as each competes for market share and finds they can discount their pricing a bit more and still deliver on Sydney or Melbourne’s after-tax return expectations.

I don’t think we should be making tax policy specifically to favour foreign investors over domestic ones –  which would be the effect of simply cutting the company tax rate – but I do think there is a good case for materially lower taxes on business income.  I’ve argued prevously for a Nordic system, in which capital income is taxed at a lower rate than labour income.  A more ambitious approach still would be to work towards the development of a progressive consumption tax.   Whatever the precise solution, the current arrangements –  high rates of company tax, high shares of GDP taken in company tax – don’t look like the right answer if we serious about lifting economic performance in New Zealand, and with it raising the capital intensity of production in New Zealand.

(Commenters on previous posts have asked whether I’m being consistent, in calling for lower business tax rates and at the same time noting the serious limitations of our remoteness.   I certainly accept that if we were adopt the Irish company tax policy it would not have the scale of benefits for us it has had for Ireland.  But an integrated economic strategy for New Zealand would also involve lower real interest rates and a lower real exchange rate, and in conjunction with lower business tax rates, that would be likely to bring forth quite a range of new business investment –  in some cases in new sectors (or retaining firms in New Zealand that might otherwise relocate), and in other cases, adopting more capital intensive (ie higher labour productivity) modes of production in existing sectors, including agriculture.)

The Labour Party is campaigning on establishing a tax working group if it forms the next government.  I hope they envisage something more than just a tidy-up and a recommendation for a capital gains tax, and that in thinking now about the possible terms of reference for the proposed tax working group –  which they will presumably want to move quickly on once in office –  they are willing to cast the net rather wider, and invite the proposed group to consider connnections between the design and balance of our tax system and our overall economic performance.   Higher taxes on business – especially the dreaded multinationals – might be some sort of “progressive” shibboleth, but in fact lower business taxes should be an option that any seriously progressive government, concerned to lift living standards for all, takes very seriously.