Skip to content
HomeSome praise for the Reserve Bank

Last week I bemoaned the fact that the Reserve Bank had dropped various questions from its Survey of (business and professional) Expectations, and although it had added some new questions (in some cases more or less directly replacing the ones they had dropped) they had withheld the survey results for those new questions.  Presumably their logic was to build up a time series of responses before making the information available outside the Bank.

That wasn’t very satisfactory. It gave them information the rest of us didn’t have, and meant that  –  in particular –  we had suddenly lost any survey-based measures of what the Bank was expected to be doing with monetary policy.  Thus, they’d deleted a 90 day bill rate question and added a question about OCR expectations, but weren’t planning to tell us the results for some (unknown) time.

I wasn’t too happy about that stance, and thought it probably wouldn’t stand up to an Official Information Act request –  it is, after all, official information, and couldn’t possibly be withheld on the usual grounds the Bank likes to invoke (eg free and frank advice).  So I lodged a request for the answers to the new questions.

That request was lodged on 7 August.  This afternoon their reply turned up, providing everything I’d asked for. 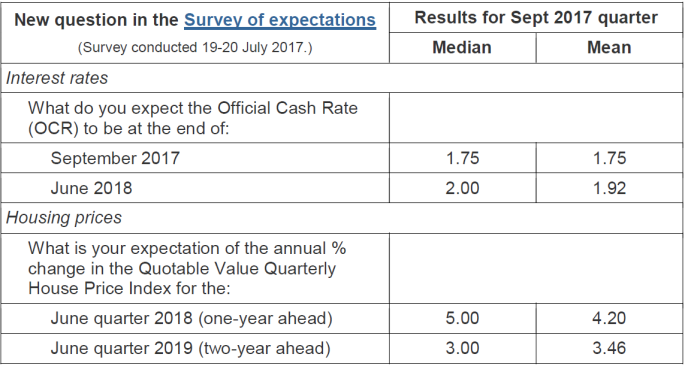 They also indicated that future summary responses to these questions will be released with the regular Survey of Expectations releases.

Of course, it is new data so there is only a limited amount one can take from this first set of numbers.  But I was interested that respondents have a mean expectation for inflation 10 years ahead of 2.13 per cent –  quite a bit higher than is probably implicit in the gap between indexed and nominal bonds (my own response to that question was 1.4 per cent).

Respondents (in a survey in late July) put a pretty high probability on the Reserve Bank having raised the OCR by next June, and respondents also seem to be of the view that the worst of the house price inflation is over for now –  rather than, say, what we are seeing at present being just a brief pause.

In time, these new questions will enrich the Survey of Expectations.  The Bank could (and should) have gone further – eg a question about the OCR five years hence (a proxy for expectations of the neutral rate) and a question or two about expected net immigration flows.   But at least we now have some new data.

I don’t often praise the Bank, but I am impressed at the quick change of mind, and helpful and full response I got today.