Just before Christmas I wrote a post prompted by an FT story about new OECD work that attempted to standardise estimates of hours worked to improve cross-country comparative productivity (GDP per hour worked) estimates.   Before writing the post, I’d confirmed with Statistics New Zealand that they had been consulted and that there were no material implications re New Zealand data.    Reading numbers, rather roughly, off a chart I’d attempted to illustrate the implied new OECD rankings.

But the OECD has now included the new hours worked estimated in their own official published data, and (thanks to a tweet from the chair of the Productivity Commission) I noticed this chart yesterday. 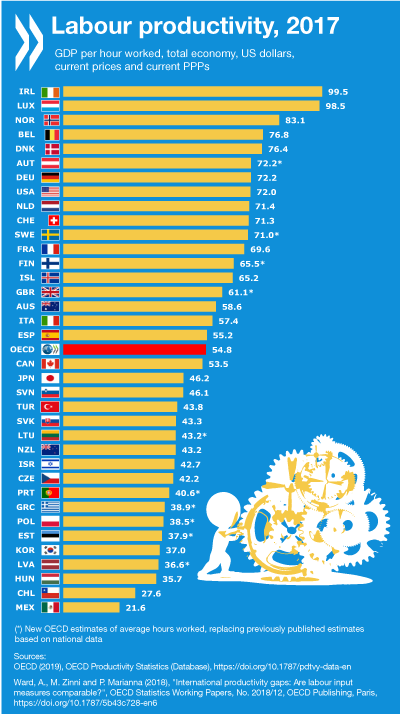 As I noted in the earlier post, this revision lifts several countries (Austria, Switzerland, and Sweden) into the upper bracket of OECD countries.  It also improves the position of the UK (in yesterday’s post I noted that they were now about 30 per cent of us, but on these revised and improved data the lead is just over 40 per cent).

But it is our position relative to the emerging OECD economies that really interests me.    Not only are Slovakia and Slovenia ahead of us –  they’ve been there or thereabouts on the old measures since about 2014 –  but now so are Lithuania and Turkey.  Go back 20 years and both  – on the old measures, but presumably on the new ones too –  were miles behind us.  Based on their productivity growth performance this decade, the Czech Republic and –  a few years later –  Poland will be beating us before long.

In a way “beating us” isn’t the right word.    It isn’t a competition in the sense that their gains mean we are worse off.  We should celebrate their economic gains.

But it is the right word if we use the experience of other countries to benchmark our own performance.    In modern New Zealand history, not one of those countries in the previous paragraph has ever been richer or productive than New Zealand.  Until now.  30 years ago all but Turkey were just beginning to throw off decades of Communist rule –  with all the misallocations of resources and skewed incentives and degraded institutions that went with that dreadful system.    Lithuania wasn’t just part of the Soviet sphere of influence, it was –  by conquest –  part of the Soviet Union itself.

And 30 years ago we were a stable democratic country, with the rule of law, long-established market institutions (even if they’d been a bit attenuated in the protectionist decades) just about –  although we didn’t know it then – to enjoy decades of a significant trend improvement in our terms of trade.     And yet these are the outcomes we’ve managed, that our policy frameworks applied to available resources have produced.

And for those who’ve liked to believe that large-scale non-citizen immigration, and a larger population, were a material part of what might improve New Zealand’s productivity prospects, here is the percentage change in the population of the former eastern-bloc OECD countries and (at the other end of the spectrum) of the high immigration OECD countries.

I wouldn’t recommend the experience of the Baltics (low birth rates and high emigration).  I don’t envy them a geographic position right now to Russia either.    But the absence of much immigration, and little or no population growth doesn’t seem to have held any of those former eastern-bloc countries back from a pretty impressive resurgence.  They all have a long way to go to match the best-of-class among the OECD countries, but so does New Zealand…..and we’ve been making no progress at all towards that sort of goal.

The Reserve Bank’s Monetary Policy Statement is due out this afternoon.  Yesterday the Bank released its latest Survey of Expectations.  There wasn’t a great deal of interest in the data, but this was the series that caught my eye. 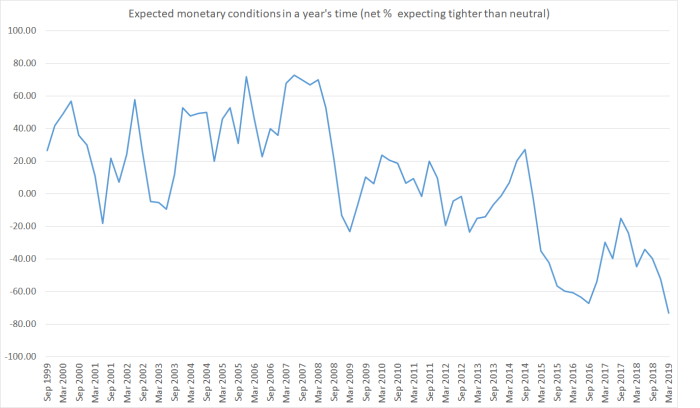 The Bank has been running this question for almost 20 years now, asking respondents (on a seven point scale) their expectation of “monetary conditions” a year from now.  They also ask about perceptions of current conditions.  Perceptions of current conditions are quite loose in the latest survey, but what is striking is that almost always when respondents think current conditions are loose they expect a substantial tightening in the next year or so.   That was what the data showed in 1999, 2001, 2003, 2010, and 2013.  It wasn’t what showed up in 2015/16: then relatively easy conditions (probably then mainly a proxy for relatively low interest rates) were expected to be followed by even easier conditions.   A succession of OCR cuts followed.  As of the latest survey, a net 69 per cent of respondents think conditions are easier than neutral (not quite a record), but by the end of the year a record (see chart) 73 per cent of respondents expect things to be easier than neutral.

This result doesn’t yet show up in the OCR expectations themselves –  which are edging downwards but a year out the mean expectation is still above 1.75 per cent (the median is bang on) –  but the expected easing in “monetary conditions” looks a bit more consistent with market pricing, in suggesting the OCR cuts are becoming more likely.

(At the margin, the OCR expectations in the survey would have been a touch lower if I had actually submitted mine.  I filled in the form, printed out a copy for my records, and then must have failed to push the button to submit it.    The lowest official OCR expectation for December 2019 is 1.5 per cent, but the table in front of me says I wrote down 1.25 per cent.  We’ll see.)

And a final suggestion for journalists at the Reserve Bank’s press conference this afternoon.  The other day a reader sent me an invitation they’d received for a function you could pay to attend at which the Governor was going to be speaking next month.

This year it is Dr Adrian Orr, the Governor of the Reserve Bank who will also speak about the bank’s views of the economy in an candid off the record way.

Perhaps the organisers mis-spoke, but I’d have expected the Bank to review carefully how the Governor’s involvement in any such event was described.    When market-sensitive matters are involved –  and Governor’s/Bank’s view on the economy clearly qualifies –  it is highly inappropriate for any Bank officials (even the Governor) to be speaking “candidly” in an off-the-record environment.  Anything other than the most anodyne comment should be done in the Monetary Policy Statement (or associated press conference or testimony to Parliament) or in on-the-record speeches, to which everyone has access at the same time and the same way.   It is even worse when access to the Governor, for potentially market-sensitive material, is sold-off, even if there is a decent charity cause behind it.

I’ve written about this sort of thing previously

Event invitation forwarded by a reader:
"Adrian Orr, the Governor of the RB who will also speak about the bank’s views of the economy in an candid off the record way."
"candid" and "off the record" don't belong together, esp in one as "candid" as Orrhttps://t.co/EV8Jfu5p0o

I notice that NBR’s Shoeshine column this week also touched on that earlier INFINZ event, describing it as an “expletive-laden speech” on all manner of topics, and observing “unfortunately, this speech was never put on the web (very strange for a Reserve Bank governor’s speech)”.    Not so strange if it were genuinely just rehearsing old ground, but the various accounts suggest it wasn’t.

Asking the Governor about the approach he thinks appropriate to his speeches  – about his commitment to openness and transparency – would aid the cause of accountability.