There has been a line run in many quarters over recent years suggesting that wage inflation is surprisingly low.   There was a bit of that tone in several articles on such issues in the Sunday Star-Times yesterday, and it even appeared in the Leader of the Opposition’s speech last week

For many New Zealanders, incomes are struggling to keep up with the rising cost of living.

We’ll probably see more such stories when the next round of labour market statistics are released later this week.

As I’ve noted in various posts over a couple of years now (including recently), I’m not at all convinced by this story.

My preferrred measure of wage inflation is the Statistics New Zealand analytical unadjusted Labour Cost Index series.  The LCI is designed to be stratified –  comparing wage inflation for the same jobs (and so not facing the compositional issues the QES measures have) –  and the “analytical unadjusted” refers to the idea that these are straight wage measures, not ones that attempt to adjust for individual job productivity changes (as the headline LCI numbers do).  The series is only available back to the 1990s, but here is the history. 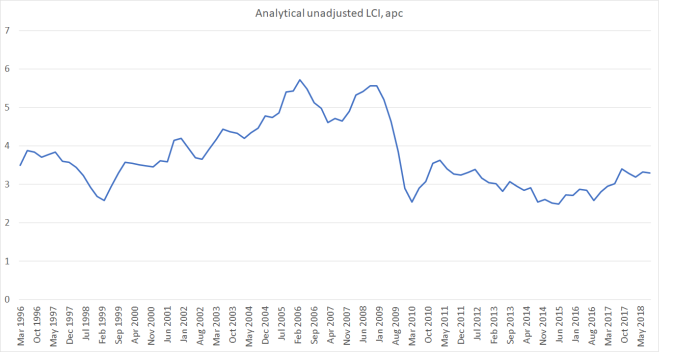 Nominal wage inflation has picked up a little, but is still well below what people got used to in the five years or so prior to the last recession.  But so is inflation for goods and services.

Here is the same wage series adjusted for the Reserve Bank’s sectoral factor model measure of core inflation (I could have used the headline CPI –  the averages don’t change materially, but there is a lot more “noise” in the CPI itself). 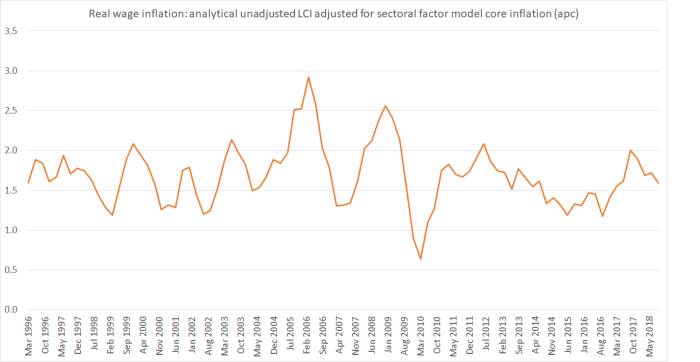 All of which is a little strange, because economywide productivity growth has slumped (to basically zero in recent years).  Here is a chart of estimated labour productivity back to 1995 when the LCI series starts. I’ve shown it in logs, so that a less steeply rising line accurately illustrates a declining growth rate of productivity.

There is a bit of short-term noise in the series, but the key story is pretty easily visible: growth in labour productivity has been slowing, mostly recently to nothing.   All else equal, it should be a bit surprising if there are persistent gains in economywide real wages when there is little or no productivity growth.

Of course, the other consideration that affects economywide potential is the terms of trade. If the terms of trade increase then even if there is no growth in real labour productivity, the overall pot is bigger and –  all else equal –  it is likely that over time wages will rise to some extent to reflect that improvement.  It is a mechanical process, or a certain one, and there is a variety of possible channels, but in an economy that experiences considerable terms of trade variability it isn’t a factor that can simply be overlooked. 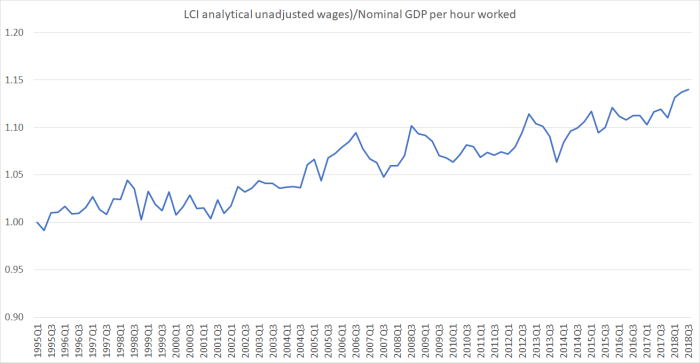 This chart compares how wages have been rising relative to the increase in nominal GDP per hour worked (the latter measure including both productivity and terms of trade effects).   A rising line –  as New Zealand has experienced (on these data) this century –  suggests that wages have been rising at a faster rate than the earnings potential of the economy.      That difference –  perhaps 13 percentage points over 17 years –  adds up to something quite significant.  On its own –  taken in isolation –  it is neither something necessarily good nor something necessarily bad.   There are distributional changes in any economy over time.  But it is something that could not continue at the same rate indefinitely (this isn’t a statement of ideology or sophisticated economic argumentation,  but simply a matter of basic arithmetic).

Here is another way to look at the issue. The chart shows the OECD’s relative unit labour cost measure of New Zealand’s real exchange rate, in this case back to 1980.

I’ve broken into two the period since liberalisation in 1984.  In both periods –  although especially the earlier one –  there has been plenty of variability in the real exchange rate.  But the average in the second half of the period has been far higher than in the first half.  Since standard theory tells us to have expected exchange rate overshoots temporarily as part of getting inflation down, I could quite legitimately have focused simply on, say, the 10 years after 1991 and compared them to the more recent period.  My point is not that any single point of comparison is somehow the “right” one, simply that in an economy where productivity growth has lagged behind that in most of the rest of the advanced world, there is something anomalous about a real exchange rate as high as ours have been.  Since this is a unit labour cost measure, it fits nicely with the previous chart –  wages and salaries have been rising faster than the economy’s earnings capacity, and to a greater extent than in many other countries.   Consistent with all that, our firms (as a whole) haven’t been able to successfully increase their penetration of world markets (export shares have been flat or falling).

Not this is in any sense the fault of wage-earners, or indeed of individual firms, all of whom are mostly responding to the incentives the economy has thrown up, and how policy has tilted the playing field.  This decade, some of those things were unavoidable (the earthquakes) but others were pure, deeply misguided, public policy choices.   Rapid population growth generates lots of activity and demand for labour but –  at least in New Zealand’s case –  appears to have done nothing to improve the longer-term earnings capacity of the economy.

In the end, material living standards in any economy will largely reflect productivity growth.  And yet, somewhat weirdly –  but perhaps consistent with the increasing political cone of silence around that failure –  as far as I could see not one of the SST articles yesterday even mentioned the productivity failure as the biggest obstacle to sustainably higher wages and material living standards.    For now, we’ve been in a bit of a fool’s paradise –  wages appear to have been growing faster than economic capacity.  But unless something serious is done to reverse the productivity failure, it is hard to see that real wage inflation in the next decade will be able to be as high as it has been this decade.  The bigger question right now shouldn’t be why wage inflation is so low, but why it is still so high.

(None of this is to rule out the possibility of some problems with the analytical unadjusted LCI data, but (a) SNZ has not pointed users to serious problems, and (b) the picture I’m painting doesn’t seem inconsistent with either the labour share of GDP data or the real exchange rate measures.)