You may, like me, be intrigued by the stories emerging from Australia about falling house prices.    The fall in nationwide house prices isn’t that large –  still less than we experienced in New Zealand in 2008 – but (a) the economy isn’t in a recession, and (b) there is little sign yet that the falls are about to end soon.  Lower house prices would seem likely to mostly be “a good thing” –  cheaper goods and services typically are – and the banks are well-capitalised to cope with even some serious combination of bad economic times and falling house prices.  But on the other hand, whatever was causing this particular fall, I’d heard little to suggest that land-use rules were being substantially liberalised in Australia (any more than in New Zealand), so I’ve been –  and remain –  quite sceptical about the idea that Australian house prices would fall sharply and stay down.  And, of course, of anything similar in New Zealand.

Time will tell, but out of curiosity I decided to dig out a few numbers.   The first was a comparison of residential investment as a share of GDP.   This chart is in nominal (current price terms). 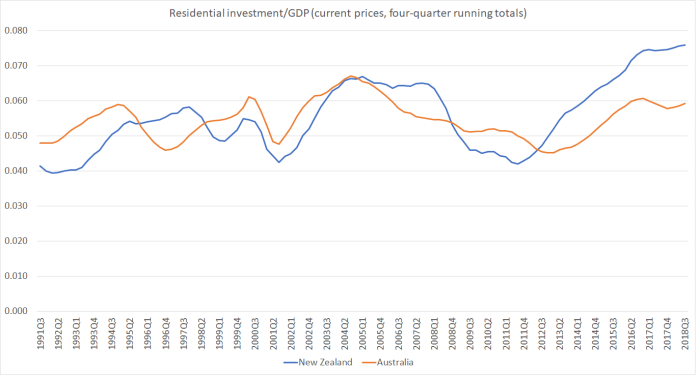 And this is in real terms (which isn’t strictly kosher and is an approach frowned on by SNZ, but some analysts do it anyway).

There are differences between the two charts, but the bit that caught my eye was that New Zealand has been devoting a larger share of GDP to house-building (and additions and alternations etc) than Australia for almost the entire decade. 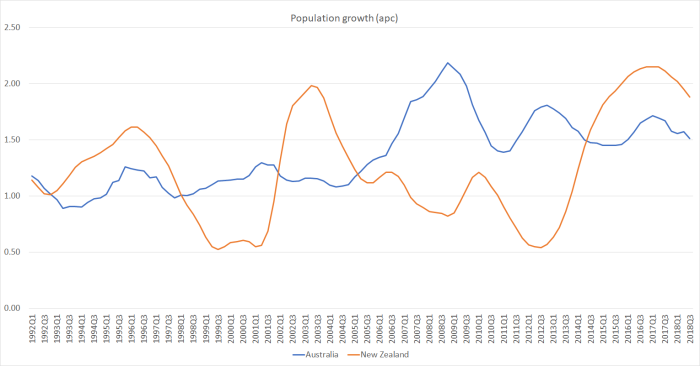 At least two other things complicate comparisons.  First, a big chunk of residential investment spending in New Zealand for several years after the Canterbury earthquakes was about repair and rebuild, not adding to the housing stock (relative to the pre-quake situation) at all.  There was nothing comparable in Australia, and so all else equal one should have expected a larger share of resources devoted to housebuilding here than in Australia.  And the other relevant factor is that intensification often involves the demolition (and loss) of existing dwellings: even in normal (non-quake) times not all new dwelling approvals add to the housing stock.

New Zealand has a reasonably long-running quarterly series on the estimated number of private dwellings.   I could only find the comparable Australia series back to 2011.  But this is what trends in the number of people per dwelling look like over the last few years.

On the face of it, that is a pretty startling difference. (I did find reference to some Australia census data suggesting that in 1991 population per dwelling in Australia was also around 2.7.)

A declining ratio of people per dwelling is what might one expect in functioning house and land markets.  After all, both countries are getting richer, birth rates are lower than they used to be, people are living longer (ie a larger share of life after kids have left home), lifelong marriage from an early age doesn’t seem to be becoming more a thing.  But it –  a fall in the ratio –  is much harder to achieve when regulatory obstacles mean house prices are driven sky-high.   Then people squash together a bit more.

I haven’t mentioned (a) the large share of apartments built in Australia in recent years (which some look on favourably –  the Reserve Bank here always used to tout that record –  and others are more inclined to mutter about future potential urban slums etc), or (b) differences in credit conditions on the two sides of the Tasman (responsible, on some tellings, for the recent weakness of the housing market).

But looking across the numbers I’ve presented here, and bearing in mind that there has been little or no effective liberalisation of land use laws in New Zealand (or a fix to the construction products market), it is hard to see any good reason to expect that we will see any material or sustained drop in house and urban land prices here. 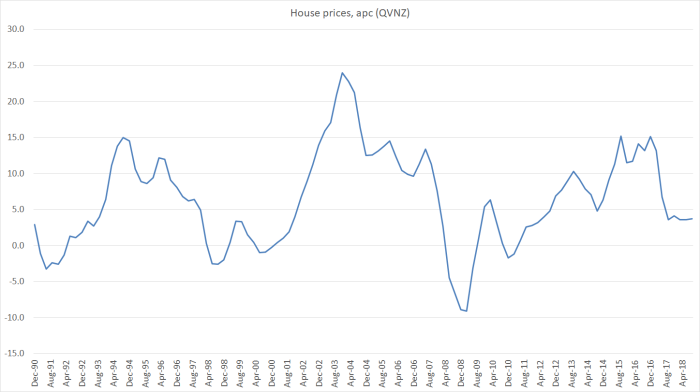 There will be a recession along eventually, ringfencing and a capital gains tax (both dubious new economic distortions) might dampen things a little, and the Reserve Bank’s capital proposals if implemented might exacerbate any downturn, but in the end if land remains artifically scarce (a bit like new cars in 1950s New Zealand) it remains hard to envisage a serious or substantial adjustment.   And responsibility for that failure –  and failure it is –  has to be sheeted home to the political parties that vie to govern us, notably National and Labour.