Pottering in the IMF WEO database yesterday, I found myself looking at savings and investment trends.  Here is chart for advanced countries as a group, with the data expressed as a percentage of GDP.

In some ways, it is quite a remarkable chart –  remarkable for what isn’t there.  Over the entire period I’ve shown –  2000 to (estimates for) 2018 – the gap between the aggregate savings rate and the aggregate investment rate has only twice exceeded 1 per cent of GDP.    The measures for the world as a whole –  where savings and investment have to equal each other, if correctly measured –  isn’t much less variable.  It is almost as if the advanced world countries just trade with and borrow from or lend to each other.   For what it’s worth, both investment and savings rates –  the former specially –  are now lower than they were in 2007.   That probably isn’t too surprising, given demographic trends and weak productivity growth.

And, of course, the aggregate chart covers a huge amount of variation in individual country experiences.   2007 was the peak of the last boom.   Here is a chart, by country, of the change in the gap between savings and investment rates from 2007 to 2018. 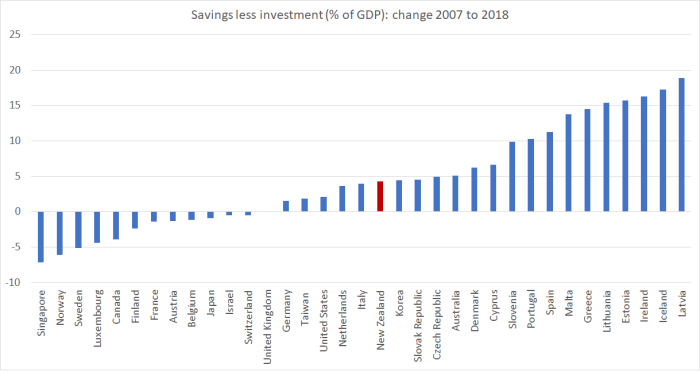 Broadly speaking, current account deficits and surpluses have narrowed in advanced countries (eg Singapore’s surplus has shrunk a lot, and Latvia’s deficits have shrunk).  But, as the first chart shows, almost all that adjustment looks to have occurred within the advanced country grouping.  As it happens, New Zealand is the median country on this chart.

Of course, it isn’t so different in the rest of the world taken together –  the IMF’s class of emerging markets and developing countries.  Here is the aggregate savings and investment chart for that large group of countries.

There was a big increase in both savings and investment shares in the 2000s, and if anything the aggregate investment share –  already far higher than in the advanced world –  still appears to have been trending upwards more recently.    (The picture isn’t much different if one simply looks at Asia –  often the focus of discussions about big imbalances.)

In the emerging/deveoping country group, there has been a bit more variability in the gap between savings and investment rates –  or at least there was in the peak boom years prior to 2008 –  but both at the start of the period and at the end, just like advanced countries as a group, emerging and developing countries as a group are basically financing all their own investment.  Again, there is huge variability in individual countries’ experiences –  China comes to mind, but so too do places like Argentina and Turkey.  But in aggregate –  and despite all the talk –  the advanced world finances itself and the emerging/developing world does the same.

I’m sure there are learned articles around on this issue (which I don’t have time today to try to track down) but it isn’t at all what (very) simple theory would have predicted.  There isn’t any simple obvious reason why savings and investment patterns should have tracked so closely within these aggregate groupings of countries, and yet not between individual countries.  It wasn’t, for example, how things were between the advanced and emerging economies in the late 19th century.  But it has been for the last couple of decades, and IMF projections don’t suggest they expect any change in the next five years.

I might try to dig out some articles addressing the issue, give it some more thought, and perhaps write another post down the track trying to better understand this pattern.