There have been numerous articles in recent days about the fall in business confidence, as reflected in various survey measures.  What, if anything, is it telling us?  Why is it happening?  What might turn the situation around, and so on?  Both sides of politics have a strong interest in their own particular interpretation.   On the one hand, general business confidence has tended to be weaker relative to actual outcomes under Labour than under National-led governments (if so, the falls might tell us nothing that we don’t already know –  that we have a Labour-led government).  And, on the other hand, (so the argument goes) the government is doing and saying quite a few things that many in the business community genuinely regard as inimical to growth, and thus it should be no surprise that sentiment is weaker now, and with it future growth prospects –  for those who particularly want to gild the lily, especially relative to the stellar performance allegedly achieved in the later years of the previous government.   As regular readers know, I treat that latter bit as laughable: productivity growth being almost non-existent, the relative size of the tradables sector having shrunk, business investment having been weak, and so on.  Oh, and the housing situation got even worse.

(The IMF Board –  whose assessment of New Zealand just dropped into my inbox – must be firmly of the “business just don’t like Labour” school, but then their assessment of the past, present, and future seems laughably detached from reality.  Believe that assessment, and you’ll believe that – at least in per capita terms –  things get even better from here, building on the “economic expansion with notable momentum” of the last half-dozen years.)

I’m not going to try to put myself in the minds of those answering these surveys but there seem plenty of reason to be rather pessimistic on the outlook from here.   Some –  perhaps many –  are the responsibility of our government, but others are not.     The global environment looks shakier than it has at least since the height of the euro crisis in 2012, with significant fragilities evident all over the place: in the euro-area itself, the ever-increasing uncertainty around Brexit, pressures in various large emerging market economies, rising US-driven trade tensions, the legacy of a debt-fuelled boom in China, and so on.   And against that backdrop, few countries have much fiscal or monetary space to respond vigorously when the next downturn comes.   Recognition of that is beginning to seep into general consciousness.

And it isn’t as if things have been going particularly well over the last couple of years.  This chart shows GDP per capita growth, with the horizontal bars marking successive 18 months periods. 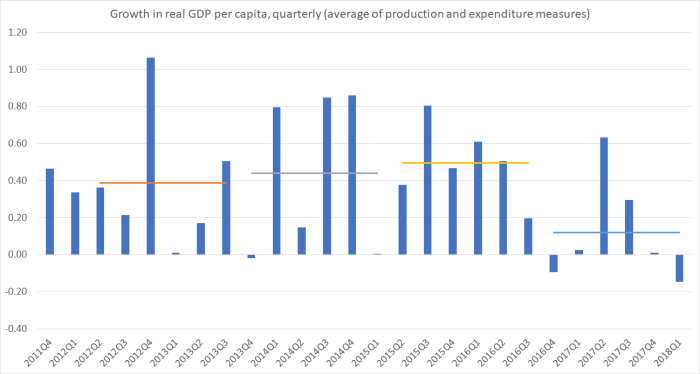 Perhaps the most recent weakness will end up getting revised away, but at the moment there doesn’t seem to be any particular reason to expect that.   There has been little or no productivity growth, and very weak per capita income growth.  It can take time for awareness of that sort of thing to take hold, especially in an election campaign session when National (party garnering the most business votes) was trying to tell a very upbeat story.

Perhaps not unrelatedly, the biggest proximate boost to growth in recent years has been house-building activity (related to earthquakes and the unexpected surge in the population).

How plausible is it to expect any sort of repeat of the last few years?  Not very, I’d have said, both because the population pressure is beginning to ease, existing house price inflation seems to be stabilising (for now anyway) and the government has, despite fine words buried deep in the manifesto, done nothing to fix up the urban land market.  If anything, housebuilding activity is likely to fall back somewhat in the next few years, and housebuilding typically plays a key proximate role in explaining short-term economic fluctuations.

Perhaps business investment could take its place.  But consider:

I have also been interested in the comparisons with the “winter of discontent” that followed the election of the Labour-Alliance in late 1999.  Some of that experience is quite nicely covered in this piece although I think the author is rather too optimistic about the current situation.  As he notes, the level and tone of commentary on this new government is nothing like as vociferous as what greeted the incoming 1999 government (complete with plans to raise taxes, repeal and reform the Employment Contracts Act, repealing ACC privatisation, and installing Jim Anderton –  opponent of most of the 80s reforms –  as deputy Prime Minister).  It hadn’t been that long since the polarising reform phase had ended.  And while Michael Cullen was much more able than Grant Robertson, his acerbic tone –  and all too obvious revelling in his own intelligence –  only enhanced the tensions.

It was a tough period.  Here is the chart of quarterly GDP growth (not per capita –  annual population growth then was around 0.6 per cent).

GDP growth averaged zero for a year –  before rebounding quite strongly.   Some of that slowdown –  which I don’t think we ever fully understood at the Reserve Bank –  may have been a direct response to the change of government and proposed new policies.   But it was far from being the only factor.  It was still relatively early days in the recovery after the 1998 recession –  so there was still lots of unutilised capacity –  but there had been a big surge in investment during 1999 (even though a change of government was widely expected).  At the time, two factors that seemed to play a part were the Y2K effect –  every firm and its dog was devoting lots of resources to ensuring systems were robust –  and building associated with the defence of the America’s Cup in Auckland in early 2000.  Both were time-limited, and the relevant dates were very close to each other.    Whatever the reason –  and, as I say, I don’t think I’ve ever seen a particularly compelling analysis of that specific period –  there was a (quite unexpected) slowdown in activity, and in particular in investment spending.   Perhaps  –  well, quite probably –  higher interest rates played a role –  we raised the OCR by 200 basis points in six months from November 1999, none of it because of the change of government.  It was our first go at actually adjusting official interest rates –  the OCR was only introduced in early 1999 –  and with hindsight, they do seem like rather aggressive moves.

One factor that did play quite a large role then was the exchange rate, which fell very sharply in 1999 and 2000.    Some vocal critics wanted to pin the blame on the change of government (expected and actual) –  I recall one particularly strident Reserve Bank Board member bending my ear about the point at the time.  But that story was simply wrong.  Here is a chart of the BIS measures of the exchange rate for New Zealand, Australia, and the US.

The New Zealand and Australian exchange rates were basically tracking each other, with no obvious role for a “new left-wing government” effect.   What was going on?  Well, two things.  First, and probably most importantly, although New Zealand was raising interest rates, so was the US, and indeed until now this was the only period since deregulation when our interest rates had matched those of the US.  And, secondly, this was the era of “new economy” vs “old economy” –  the NASDAQ peak in the dotcom boom peaked in March 2000, and capital was flowing towards these perceived new opportunities and away from “old economies” like Australia and New Zealand.   That period proved quite shortlived, and by the start of 2001 the Fed was cutting interest rates and the US itself had entered a mild recession (not mirrored in either New Zealand or Australia).

Which brings me back to the observation earlier that –  politics aside, and the pressure from one news cycle to the next –  the current situation should be more concerning.  There was a pause in growth then, of the sort we haven’t seen yet this time, but:

and perhaps the biggest difference of them all is the real exchange rate.  The current level is about 30 per cent higher than it was in 2000, and it had fallen a long way to get to those 2000 levels (and not on heightened risk concerns etc).  Those falls created a credible prospect of new business investment in the tradables sectors.  There is nothing comparable now, and we’ve probably exhausted the limits of domestic demand (especially residential investment) as a support for headline GDP growth.

One could add to the mix that if anything goes wrong, sourced here or abroad, there isn’t much capacity for macrostablisation policy to respond.  Yes, the OCR could be cut –  and probably already should have been, given the persistent undershoot of the target (another difference to 2000) –  but the Bank is likely to be increasingly uneasy the further it cuts from here, and on its own estimates can’t cut more than about 250 basis points in total.   And whatever the merits (or otherwise) of the 20 per cent debt target, it will come under new pressure in any downturn, and the (market and business) pressures to stick to it will only intensify in that climate –  “show us your mettle, minister” will be the watchword.