Skip to content
HomeSplashing the cash at the Reserve Bank?

When the Reserve Bank’s Annual Report turns up in my in-box, the table on remuneration isn’t the first place I turn.  In fact, executive pay more generally isn’t one of those issues I can get terribly excited about.  I thought Jim Rose’s column in the Herald the other day made some good points, although (a) I’m not sure that whether the share price goes up or down when the CEO leaves is really a good indicator of whether the individual was appropriately remunerated or not, (b) none of the defences he deploys really apply with any great force to senior public sector positions.  And there is no market discipline on top public sector salaries, so critical scrutiny  and open questioning actually matters.

But someone emailed me suggesting that the Reserve Bank Annual Report implied that the (now former) Governor, Graeme Wheeler had had a big pay rise.  And that did interest me, because outside the halls of the Reserve Bank Board it isn’t clear who would have thought that Wheeler had done something even approaching a stellar job as Governor.

Wheeler started at the Bank in September 2012, so we can’t get a read on his initial salary in the (June year) 2012/13 accounts.   But there are four years of annual reports when he will clearly have been the top earner in the Bank.    The relevant tables show the top earner received as follows during these financial years:

That is some jump.  But there is a footnote on this year’s numbers, stating that “the highest remuneration band includes a payment of $101000 for accrued annual leave, which was paid out in cash rather than taking leave”.  (That must be about two months of unused leave, for someone in the job  – at a time of no crises – less than five years, which itself doesn’t suggest particularly good management.)

But even if we subtract the $101000, we are left with figures suggesting that Graeme Wheeler got a payrise of around $90000 between 2015/2016 and 2016/17.  In fact, it was quite possibly more than that, because he personally may well have been reviewed on the anniversary of his appointment, in September (and if so the 2016/17 numbers may include only around three-quarters of his big annual increase).

So how do his cumulative pay increases compare against either CPI inflation or general wage inflation (I use the analytical unadjusted series, which is materially higher than the QES recently)?  There has, of course, been no productivity growth in New Zealand over the term Wheeler was in office. 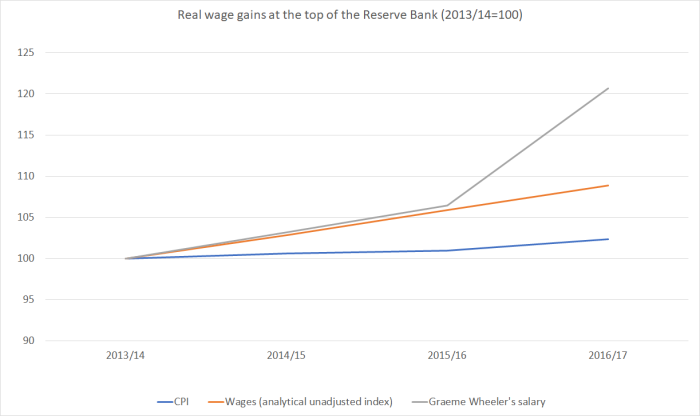 It is a pretty astonishing boost.  Perhaps not a great problem for somone doing a stellar job but this was someone who:

Oh, and then late in the 2015/16 year, there was the OCR leak debacle which among other serious failings, involved the Governor publicly tarring as irresponsible the person (yes that was me) who drew to the Bank’s attention evidence of the apparent leak.

This year, of course, (but no doubt well after Wheeler got his last pay rise) there was the still-more-shameful episode, in which Wheeler sought personally (and used his senior managers to reinforce his efforts) to silence a pesky critic, who happened to work for an organisation the Reserve Bank regulates.  And on that note his tenure ended badly, and largely unlamented.

So what were they thinking when they gave such a big pay rise to someone with such a mediocre (at best) track record, who was hardly like to walk out on them if he didn’t get the increase?  And who was “they”?

Well, on this occasion, it wasn’t the Bank’s Board.  The Reserve Bank Act is quite clear that

The conditions of employment of the Governor, including remuneration, shall be determined by agreement between the Minister and the Governor after consultation with the Board

In practice, the Board may well have put a recommendation to the Minister.   But however this idea first got traction –  whether Wheeler pushed for a pay rise, or the Board really did initiate it –  the Minister approved it. That was last year’s Minister of Finance, Bill English.   This was the same minister who went on record pushing back against a big pay rise for another public sector chief executive, Adrian Orr –  but couldn’t actually stop the New Zealand Superannuation Fund’s board putting through the pay rise.    Sceptical as I am of the NZSF, and of its long-term performance, Orr’s case for a big pay rise looks to have been considerably stronger than Wheeler’s.

I can’t imagine why the Minister of Finance approved such an increase, especially against the backdrop of his own evident discontent with the Bank.   I guess he isn’t too busy governing this week, so perhaps some journalist could ask him?

(But it was fortunate for Grant Spencer that Bill English did approve that pay increase.  When the (unlawful) “acting Governor” appointment was announced we were told that Spencer would be paid to mind the store on the same terms and conditions as Wheeler had been receiving.)

PS.  Someone who attended a post-election lunchtime seminar at Victoria University today informs me that Colin James (usually well-connected) stated there that he understood that The Treasury is undertaking a “root and branch” review of the Reserve Bank Act.  If so, that would be most welcome.

14 thoughts on “Splashing the cash at the Reserve Bank?”