To repeat my point in my earlier post, I don’t greatly care which country our economic immigrants come from.  The skills and ideas they bring are what matter most in terms of the prospect of economic benefits to New Zealanders.  The data suggest that typical skill level is a lot lower than successive governments have suggested.

But in this chart I simply take the annual MBIE data on the country of citizenship of holders of outstanding work visas (all types of work visas, but not including students here on student visas but with work rights) and group the countries by continent.   The data are all from MBIE’s Migration Trends and Outlook tables. 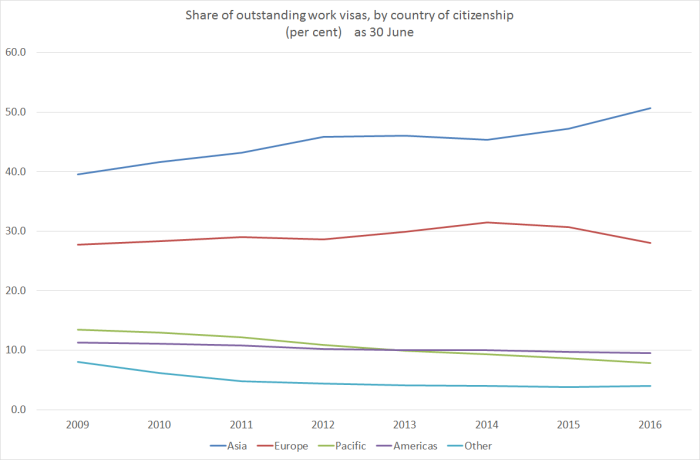 The advantage of these data is that they show outstanding stocks, so remove all those who have come and then gone again.   The disadvantages are that:

To repeat again, I’m interested in the policy settings, and the overall (including distributional) economic effects.   But it is still worth clearing away attempts to muddy the water, and the Herald’s suggestion, using inadequate PLT data, that temporary migrants on work visas are not dominated by people from Asian countries, is misleading at very best.