There is a story on the excellent new Newsroom site this morning on immigration.  When I printed it out at about 8am, it was running under the headline “Slashing net migration not easy”, although forty minutes later that had been revised to “Few answers to slashing net migration”.  [UPDATE: by 4:15pm the story is now running as “Slashing migration offers no easy answers”.]    Perhaps reflecting the preferences and presuppositions of the author, the URL for the story reads “immigration to rear its ugly head”, as if somehow there is something wrong with a serious discussion, in election year, about the number, and type, of people we allow to settle (or work) here.    But whether we should or not, if we (New Zealanders collectively) decided to cut back migrant numbers it is really quite easy to do so.  I’ll come back to that.

We are still waiting to see where Labour is going to land on immigration.   The other day housing spokesperson and campaign chair Phil Twyford was talking about what Labour might do on immigration.

Labour’s election chairperson Phil Twyford said Auckland was creaking under the weight of too many people and not enough investment in infrastructure.

Mr Twyford said details were still being worked out, but Labour policy would be to find a better balance.

“There is room to ease back particularly in the area of temporary work visas, and the blowout that has occurred in the so-called skilled migrant category.

“We think there’s flexibility there to ease back on the overall levels of immigration and that will take some of the pressure off Auckland.”

Little said National had failed to manage immigration, especially by bringing in labourers when there were unemployed labourers here, and by the number of work visas issued.

But he said Labour would manage immigration, not cap it.

Bad as they are, stresses on Auckland –  housing or infrastructure –  aren’t the most compelling economic argument for cutting migrant numbers.  But if Labour is serious about making a difference there, it can’t just involve tweaks at the margin, or things that will affect numbers for just a year or two (since land markets, for example, will trade on expectations of future demand and supply pressures).  I guess we’ll see some details eventually.

What makes me sceptical that Labour’s talk in this area will amount to much is another comment from Andrew Little in the same article.

But asked if he welcomed signs Auckland house prices were falling, Little said no.

I’m sure there all sorts of political considerations about not scaring the (relatively small minority) of people who have taken on very large mortgages in the last few years, but really…….    When house prices in Auckland are ten times income a key marker of whether things are coming right will be a fall in house prices.   If all Little is saying is that prices will ebb and flow a bit, and that nothing structural has yet happened to reverse the inexorable trend rise in price to income ratios, then I agree with him.  But when houses are less affordable than they’ve ever been, we need politicians with the guts to say that they want to see house prices, especially in Auckland, a lot lower.

[UPDATE: In another report of the same interview Little confirms his reluctance to see prices fall    “Having the right number of houses, or closer to it, stabilises prices, it doesn’t collapse prices.”    That stance would be fine, if prices hadn’t got so out of whack over the last few decades. ]

It isn’t as if time will quickly take care of the problem if nominal house prices simply hold at current levels.  We have an inflation target centred on 2 per cent, so over time we can assume incomes will rise by around 2 per cent plus whatever growth in labour productivity the economy can manage.  For the last five years, that has been zero.     Here is what happens to price to income ratios, starting from 10 (around the current Auckland level) on three different productivity scenarios. 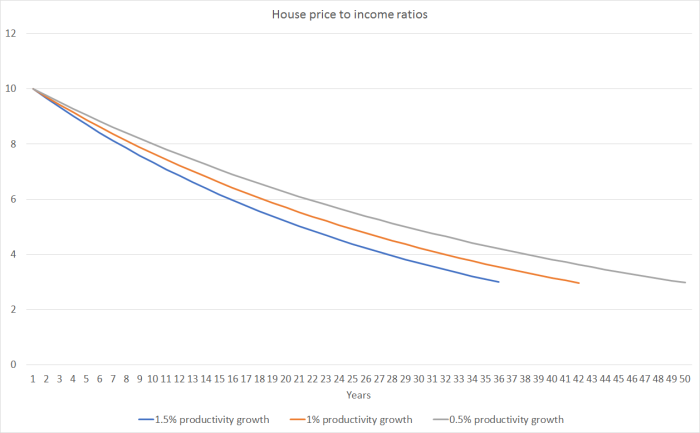 Depending on how optimistic you are, it could take 40 to 50 years to get house price to income ratios back to around three – the sort of level sustained over long periods in well-functioning US cities (and in many other places before land use regulation became the fashion). Perhaps you are sceptical New Zealand could get back to three. It would take 20 years or more just to get back to five.  That sort of adjustment makes the government’s NZS eligibility reform proposals look positively fast-paced.

But to revert to immigration –  which has the potential to play an important role in accelerating any adjustment that looser land use regulation, and perhaps even new government house building, might set in place –  Newsroom’s Shane Cowlishaw reckons there are few easy ways to cut immigration.    It is mostly quite a good article, made more difficult for the author by the refusal of either the Minister of Immigration or Winston Peters to be interviewed, and the fact that neither Labour nor New Zealand First have published any details of their policy in this area.

But, frankly, I think Cowlishaw’s conclusion is simply wrong.  It isn’t that hard at all, and actually the current government showed that with the baby steps they took last year (cutting the residence approvals target, and –  within that – suspending parent visas, and reducing the family category numbers).

I outlined what I’d do in a post a few weeks ago.   Here it is again, all focused on the bits of the net flow that are about immigration policy, the number of non-citizens we let in to live and work in New Zealand.

I’d also be rethinking (although this isn’t specific) the emphasis in the current points scheme on people who already have New Zealand work experience.  It was a well-intentioned reform –  a reaction against the experience in the 1990s of people coming in who for various reasons simply couldn’t get established in the New Zealand labour market using the sorts of skills/qualifications that got them entry in the first place.    But it has the effect of giving priority to relatively lowly-skilled people who managed to get in on temporary work or student visas, over people with much higher skills and much more potential to add value to New Zealanders over the long haul.

Little or none of these sorts of changes requires complex legislation. For better or worse, the details are mostly at the whim of the Minister or Cabinet.  They would make a substantial difference, and offer the prospect of a sustained reduction in the net inflow of non-citizens (although still lots of year to year variability in the PLT numbers, that include New Zealanders).   They would, among other things:

Of course, the immediate response from much of the business sector is “but how will I get workers”.    It is a real and genuine issue for individual firms under current policy settings.   But individual firms simply don’t see the economy as a whole, or the adjustments that would take place across the whole economy if a policy package like the one I’ve outlined above was adopted.

Thus, individual firms treat migrant labour as increased labour supply.  And, for each of them, of course it is.  But migrants add demand as well as supply –  reasonable estimates (and the consistent historical view of New Zealand macroeconomists are that in the short-term the demand effects are stronger than the supply effects.  After all, immigrants have to live somewhere, shop somewhere, work in some building, and few bring their household appliances (etc) with them.  So an individual migrant might indeed ease an individual employer’s labour availability issues –  and if there are lots of migrants in a specific sector, they might even ease those constraints for the sector –  but for the economy as a whole:

That is true even if all the typical economist pro-immigration arguments, including those about potential productivity spillovers, hold  (which, of course, I don’t think they have in modern New Zealand).

So what would happen if a government were to announce a package like the one I’ve outlined above?  I’ve already sketched it out at a high level above.  But here is a bit more colour and flavour.

Whole sectors of the New Zealand economy employ many more people than otherwise because our population is growing so rapidly.   Activity in those sector would shrink, perhaps quite materially.   With a population growth rate around zero –  similar to those of many prosperous European countries –  not many people would be required to build new houses and road, and fewer people (for example) would be selling the stuff the stocks new houses (carpets, appliances etc).  Those people would need jobs elsewhere.  The prospect of lower interest rates would make more private investment attractive, but on its own that channel would take a while to work –  after all, overall domestic demand growth would weaken.  But the lower exchange rate –  actual and prospective –  would make a big difference to the competitiveness, and willingness to invest, of the tradables sector.   That investment will usually require workers –  to build it, and to staff it. So resources will shift within the economy.   Dairy farmers who couldn’t get Filipino workers could afford to bid up wages to some extent to attract potential New Zealand workers  (it doesn’t happen overnight, but markets work –  it will happen).  It would certainly be tough for (consumers of ) some domestically-oriented industries that have been heavily reliant on migrant labour (one could think of rest homes) but the whole point of an economic strategy that successfully reorients the economy towards a much more strongly-performing tradables sector is that tradables firms have it better relative to non-tradables firms.  (And non-tradables sector firms typically have pricing power that tradables sector firms don’t.)  It has been the other way round for too long, and we’ve seen the results (in eg, the charts I showed the other day).

Are there losers, even among New Zealanders, from such an approach?  Well, yes, of course.   It is almost impossible to re-orient the economy without there being losers.  Some of the people who will be worse off will be those holding urban land in or around our major cities (especially those who might otherwise have been thinking of selling).  Non-tradables firms often won’t find it attractive –  a business model geared to rapid population growth isn’t going to look so good under a model that no longer seeks to drive up population.  And there would inevitably be some workers in some firms/sectors who might find the adjustment difficult –  as is the case with any structural change, and as was the case as we moved (unconsciously no doubt) to skew the economy away from tradables firms towards non-tradables.

It is easy for economists to wave their hands and suggest big changes in economic structures and policies. It isn’t usually the economists themselves who are affected.  But our current strategy – the grand Think Big population experiment –  just isn’t working.  It wouldn’t be hard to change it, and in my assessment if we were to do so –  along the lines outlined above –  we put the New Zealand economy on a much better footing for sustained growth in productivity and real incomes/material living standards.  We’d also greatly ease those intense near-term stresses –  particularly housing and infrastructure in Auckland –  that rightly grab the headlines.