Sometimes I find the Prime Minister’s claims about the New Zealand economy, and Auckland, almost breathtaking.  There is an insouciance about them that almost defies belief. They certainly defy data.

In a speech to an Auckland business audience yesterday –  there is a report here, and also video footage –  the Prime Minister repeated his breezy claims that Auckland’s “challenges” around housing and transport are “a quality problem”, and a “sign of success”, and that both the city and the country are doing “incredibly well”.

Perhaps that is how it appears when you are already wealthy, live in a large house in a prime inner suburb, and have a taxpayer-provided chauffeur at your constant disposal.  Neither housing nor traffic problems must impinge terribly much.

I’ve commented on a lot of the detailed issues previously, including the Prime Minister’s apparent vision of New Zealand as a Switzerland of the South Pacific, and am not going to go through all the detail again here.

But let’s just repeat some of it in summary:

As it happens, for most of the last decade even the unemployment rate in Auckland has been consistently higher than that in the rest of the country, even though Auckland has a much deeper labour market and one might have supposed that matching labour demand and supply in a changing economy would be that much more frictionless there than in other regions. 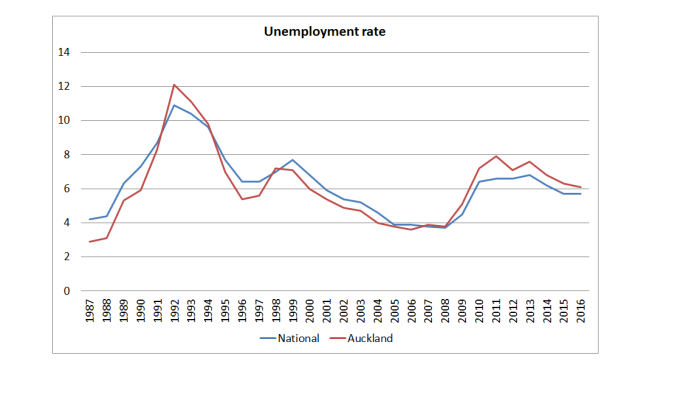 And it isn’t just that Christchurch has had a very low unemployment rate through the repair and rebuild period.  Graphing the Auckland unemployment rate against that of the median region produces much the same picture.

The Prime Minister goes on

“You’ve got net migration not just strong from India, China and Australia but actually net migration from around the country,” Key said.

Well, sort of.    Actually, in the last year around a net 3500 New Zealanders left for Australia, and a slightly smaller (net) number of Australians arrived.  Net inward migration is not a trans-Tasman phenomenon at present –  except, of course, in the sense that a more usual state of affairs has been a large net outflow.

I hadn’t really appreciated the extent of the increase in the number of people arriving on work and residence visas (ie every single one needing explicit government approval) in the last couple of year. 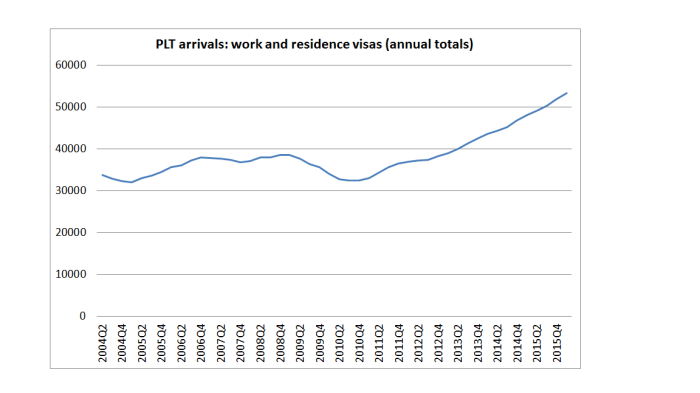 And the massive increase in student visa numbers (mostly to second tier non-university entities), many of whom later acquire residence, is on top of that.

All of which might be a cause to celebrate if there were any sign that these massive migration inflows –  probably the second strongest wave of immigration in the last 100 years – was doing any good in lifting the incomes or living standards of New Zealanders (and particularly Auckland, where the largest proportion of migrants end up).

But there seems to be no evidence of that at all. Certainly government agencies haven’t been willing or able to produce any.  If anything, there is reason to worry that the policy-driven influx of people is undermining income prospects of New Zealanders.

And what about the claim that people are coming to Auckland (“net migration”) from the rest of the country?  That really caught my eye when I saw it yesterday. Perhaps the Prime Minister has access to some data not generally available, but it isn’t the story in the official data, and hasn’t been for sometime now.

In our quinquennial censuses Statistics New Zealand asks where people were living five years previously, which enables them to produce data on internal migration.  As censuses have long been done at five yearly intervals, that generally provides a comprehensive estimate (and I stress “estimate” because not everyone who fills in the census seems clear on where they lived five years previously).  Because of the Christchurch earthquakes, the scheduled 2011 census was postponed to 2013.  The results of that census give us a picture of internal regional migration from 2008 to 2013. 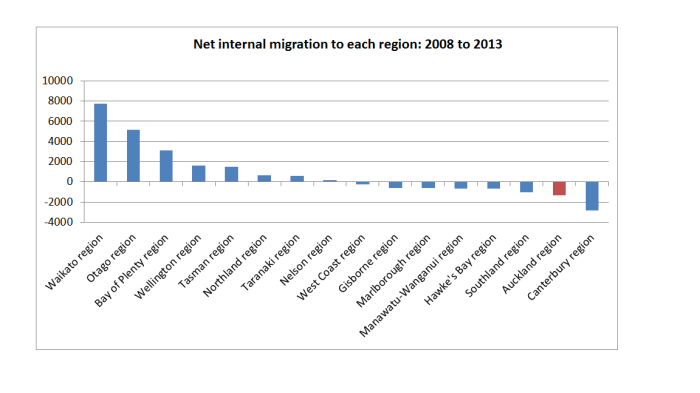 Net, a small number of New Zealanders left Auckland for other parts of the country.  Relative to Auckland’s population, the estimated outflow is tiny, but there is just no sign of New Zealanders flocking to the “success” of Auckland (and note that this period includes the outflow of people from Christchurch in couple of years after the earthquakes). Perhaps things have been different in the last three years, for which we don’t yet have data.

But if so, it would be quite a reversal. SNZ has compiled this data back  as far as the 1986 to 1991 five-yearly period.  The last five yearly period in which Auckland experienced a net inflow of people from elsewhere in the country was from 1991 to 1996.

Here is chart which covers the estimated net internal migration to each region for the period 1986 to 2013 (with the two years 2006 to 2008 missing, because they weren’t captured by any of the censuses). 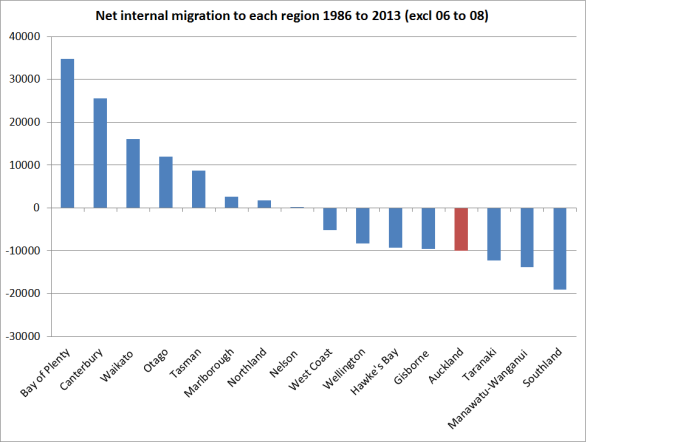 Internal migration has certainly happened on a significant scale (gross and net).  But, net, it hasn’t been to Auckland.

Add in the huge outflow of New Zealanders to other countries (mostly Australia) over that period, and it looks a lot like New Zealanders avoiding Auckland.  And that shouldn’t really be surprising: despite its really pleasant physical location, housing has become increasingly unaffordable and income growth has lagged behind.    Other places do worse (as a share of population), but Auckland was supposed to the beacon of opportunity and our future economic prosperity.

Of course, one can always attract foreigners from poorer countries,  and that is what successive governments have done (especially, in effect, in Auckland).  But that isn’t a sign of economic success.  It is, instead, an economic (and social) strategy (“critical economic lever” is MBIE’s term), and one which increasingly looks to have failed –  at least if the benchmark is, at it should be, benefits to the living standards and incomes of New Zealanders.

As for the Prime Minister’s final claim, that the New Zealand economy is doing “incredibly well”, words almost fail me.  At a cyclical level, our unemployment rate at 5.7 per cent is still uncomfortably high (and much higher than it was when the government took office, and currently the same as Australia’s when we’ve typically managed better unemployment outcomes).  Productivity growth –  whether labour or MFP – remains mediocre at best, and there is no sign whatever that New Zealand is making up any of the ground lost relative to other OECD countries in the last 50 years or more.

Most people in New Zealand who want to work have jobs, and material living standards for most are still quite comfortable.  But it is the continuation of a long slow relative decline.  And nothing the current government –  or its predecessor –  has done has done anything to begin to reverse that decline.  The big-Auckland “strategy” does increasingly look to have been something really quite bad, worsening living standards for Aucklanders (especially in conjunction with the “rigged” dysfunctional land supply market), and dragging down prospects for the rest of New Zealand.

As I said at the start, the insouciance in the face of all this underperformance almost defies belief.  But what matters much more is that it simply defies the data.