The other day Treasury released a 29 page set of slides put together in September 2014 for an internal “Immigration Policy Forum”.   The Forum discussion –  probably gathering all the key people in Treasury –  seems to have been designed to help Treasury come to a “clearer shared position on immigration policy”.  For a time, at least, there seemed to be two schools in Treasury –  a “microeconomic wing” championing the gains to New Zealand from immigration policy, and a “macroeconomic wing” –  perhaps somewhat influenced by some of my arguments –  uneasy about the possibility that the macroeconomic pressures (eg on real interest and exchange rates) resulting from high target rates of non-citizen immigration might be impeding New Zealand’s medium-term economic performance.

I’m not entirely sure why Treasury chose to release these slides now.  They aren’t a response to an OIA request, but may have been prompted by my recent OIA request (the results of which they released the same day) asking for copies of any material Treasury had prepared on immigration since 1 April 2015.   I haven’t read the OIA release results in any detail yet (there is 200 pages of material), but these slides look to provide more of an overview of Treasury’s perspective than any of the specific papers in that collection.  The slides themselves don’t tell us what view the Forum reached on immigration, but from the fact that Treasury has voluntarily released them and that there is no suggestion the meeting disagreed with the proposed stance, it seems safe to conclude that the slides represented a Treasury view, at least in late 2014.

Last year, I had asked for copies of papers Treasury had provided to the Minister on the economic impact of immigration.  I discussed here what they released then, noting that I had been surprised how little evidence or argumentation they had advanced suggesting that New Zealanders as a whole were getting economic benefits from one of the largest inward migration programmes run anywhere.

What about the 2014 slide pack?  Is there any sign of a more in-depth assessment of the issues and arguments as they apply specifically to New Zealand?  Unfortunately, not really.

There are some interesting and nicely-put-together charts.  There were even a few things I didn’t know (eg there is an interesting OECD chart showing that New Zealand has the highest share of the labour force made up of temporary migrants of any OECD country). 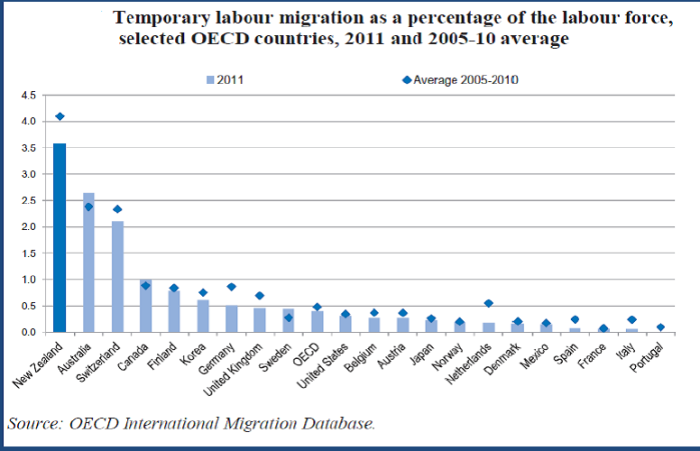 Much of the discussion is, in principle, organized around this decision tree.

I’m not going to devote any more space to either Option 1a (substantially increasing immigration) or Option 1d (trying to adjust the inward flow of migrants cyclically, to ease cyclical pressures on the economy).    The first simply isn’t going to happen –  especially while the advocates of large scale immigration to New Zealand can show no clear evidence that New Zealanders have benefited from the large scale immigration we’ve already had over many decades.  And I agree with Treasury that adjusting the immigration programme cyclically isn’t particularly sensible or workable –  both because the economic cycle is difficult to forecast, and because many of the fluctuations in net migration (ie flows between NZ and Australia) aren’t directly amenable to New Zealand policy measures.  Monetary policy should remain the cyclical management tool of choice.

The real choices are between maintaining something like the current target level of non-citizen immigration (45000 to 50000 residence approvals a year) and reducing that target, perhaps to something more in line with the typical OECD country.   Within either of those options, there are choices about how we select migrants and what sort of people we aim to bring in.  At least in these slides, Treasury is more interested in these latter issues than in the former.

The challenge of identifying impacts of current level of migration is that it
is difficult to specify a counterfactual – what would have otherwise
happened without the observed level of immigration.
The evidence isn’t definitive enough to make a judgement about whether
net benefits would be higher from the current quantity of inward
migration or a lower level. But it does show that composition matters.

Of course it is difficult to specify a counterfactual –  it often is –  but that is no excuse for not trying.  It seems that, in substance, Treasury is reduced to saying “we really have no idea whether New Zealanders are benefiting from the large scale immigration”.  That is quite indictment after 25 years of (more or less) the current policy, and this from our premier economic advisory agency.
Treasury is uneasy about the skill mix of migrants however. The slides are quite explicit in some places

Our key judgment is that migrant labour is increasingly likely to be a substitute for local low -skill labour, and this is an impact that we should try and mitigate.

I’d see this as fairly consistent with the points I made in a series of posts last year (eg here) about just how relatively not-very-skilled our skills-based immigration had become (eg the disproportionate numbers of retail or restaurant managers).
But Treasury remains quite upbeat on the prospects for highly skilled migration

More high-skilled migrants can benefit high-productivity firms and industries, and we are less concerned about wage and employment effects for high-skilled local labour.
This is because we think:
– High–skill migrant labour is more likely to complement local labour and capital, rather than substitute for it
– High-skill labour will increase the skill composition of the local workforce, which is the theoretical channel through which many of the beneficial impacts of migration are achieved
– To the extent there are LM impacts on competing local labour, we think there are normative policy reasons to be less concerned at that end of the earnings spectrum
Research suggests that the high – skill migration may have a positive impact on
innovation and productivity via its effects on skill composition. High – skill labour is also likely a complement for both low -skill labour and capital.
We think this suggests that we should look to increase the supply of this sort of labour.

All of which might be fine if, for example, they could show that the New Zealand economy (and New Zealanders in particular) was actually benefiting from the high-skilled immigration we already have.   Or if they could show how New Zealand could attract genuinely highly-skilled people in large numbers, when large numbers of our own skilled people are typically treating New Zealand as a place to leave.  Or if they had engaged with the data suggesting that many skilled migrants take decades to match the earnings of comparably-skilled locals.

At one level, I don’t disagree with Treasury.  If we are going to run a large inward migration programme, it is far better to do as we advertise, and make it a genuinely highly-skilled focused programme.  The proportion of fairly modestly skilled people we have been allowing in in recent years seems most unlikely to benefit New Zealanders as a whole, and there are more plausible stories for widespread benefits from attracting highly-skilled migrants than low-skilled ones.

But one really needs a lot more material than is captured in these slides to reach a considered view on the appropriate level of non-citizen immigration for New Zealand.   Perhaps most importantly, one would need to engage seriously with 25 years of continued economic underperformance, even though we have been running one of the largest immigration programmes around.  But one would also need to show signs of thinking hard about the structural characteristics of the New Zealand economy, which continues to rely –  almost as heavily as ever  –  on its natural resource base, not self-evidently a resource that needs (or benefits from) lots more people.  One might need to show a serious willingness to grapple with such characteristics of the New Zealand economy as its persistently high real interest rates and the persistently high real exchange rate.  Or to grapple with the indications of the economic underperformance of Auckland.

And there is simply none of that in these slides.

(One might even want to grapple more seriously with the housing market tensions that high levels of immigration has created.  I’m quite with those who say that a first best response might be to sort out the housing supply and urban land market, but……there is very little sign of that happening, and no sign that it has successfully happened anywhere else.  This isn’t just some sort of sequencing problem –  urban land issues look fairly intractable, not for technical reasons, but for reasons having to do with the preferences of residents on the one hand, and planners, bureaucrats and central and local government politicians on the other.  In the meantime, while people blithely talk of “immigration isn’t the problem, housing supply is”, too many people seem to be living in overcrowded accommodation, garages and even –  no doubt rarely and temporarily –  in cars.)

I’ve argued previously that the Productivity Commission should be asked to conduct a serious review of the economics of New Zealand’s immigration policy, in the context of the specific structural features of the New Zealand economy.  The Commission seems, on its track record to date, to be prone to rehearsing  – in more sophisticated language and at considerable length –  current conventional wisdoms, but it remains the best-placed official agency to do some more serious work in this area and to contribute to a better-informed public debate.