I’ve been under the weather with a bad cold and wasn’t going to write anything today.  But pottering around various websites, I discovered that the Conference Board had last week released its annual update of labour productivity estimates, in PPP terms, for a wide range of countries.

Since my involvement with the 2025 Report some years ago I’ve been intrigued by developments in the eastern European countries, which laboured under Communist rule for decades until around 1990.  By 2009  when we wrote that report, the first ex-communist country had almost caught up to New Zealand’s real GDP per capita.

Older readers will recall the line Bob Jones made much of in the 1984 election campaign, in which he compared New Zealand’s economy in 1984 to a Polish shipyard.  The implication, of course, was that it was the heavy burden of protection and controls that were accounting for New Zealand’s disappointing economic performance.

Of course, for all that was wrong with economic policy in New Zealand in the decades from the 1930s to 1980s, our economy was not remotely as distorted as those of the east European countries.    But in a sense the narratives were similar in the two countries: open up the economies to more international competition, and liberalise domestic markets in a context of secure property rights, and stabilize macro policy imbalances, and one should expect to see a lot of convergence, catching-up with the more successful market economies.  Here is an illustration of the sort of thing that was expected in New Zealand –  a 1989 photo (reproduced in the Herald a few years ago) of then Finance Minister David Caygill’s expectations/aspirations. 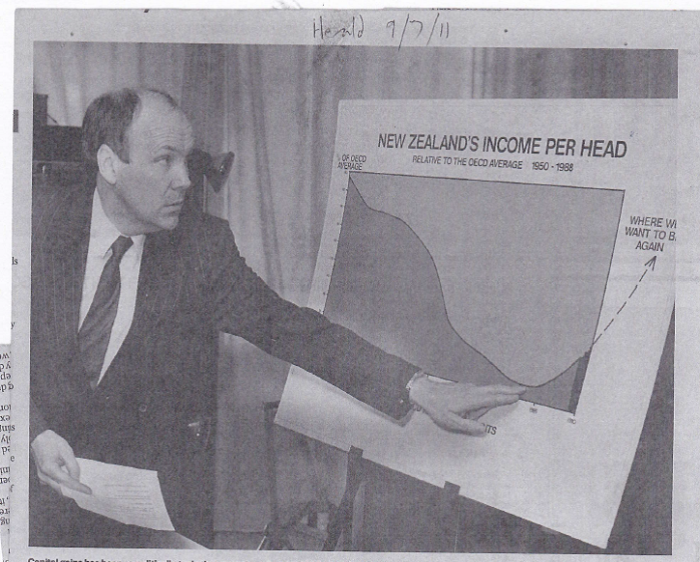 The median eastern European country had GDP per hour worked 55 per cent of New Zealand’s in 1990, and that had increased to 77 per cent last year.  All except Russia gained material ground on New Zealand.

That might look unsurprising.  After all, these were very  badly distorted economies during the Communist era.

In 25 years since the fall of Communist rule in eastern Europe, the median country of those 11 had increased labour productivity from only 38 per cent to 48 per cent of US levels.  Russia had lost ground relative to the US.  And so –  less dramatically –  has New Zealand.   (And the picture is much the same if one uses France and Germany as a benchmark, rather than the US.)

They were daft and damaging protectionist/statist policies we had in place during those decades – 20 TV factories indeed –  but they don’t look to have been a big part of the story in our relative decline.