Skip to content
HomeRegional GDP revisited: has Auckland really been that weak?

In a couple of posts earlier last week, I used the regional (nominal) GDP data, showing how weak Auckland’s per capita GDP growth appears to have been over the last 15 years (the period for which the data exist).   And it didn’t appear that terms of trade changes could explain the regional patterns, since most of the gains in New Zealand’s terms of trade has reached our shores in the form of lower import prices, the effects of which should have been quite pervasive across the economy.

But as I got to the end of the second of those posts, I started to get a bit uneasy about the data.  I had noted that over the 15 years, Auckland’s population had increased by 30 per cent, and that of the rest of the country by only 13 per cent.  And yet, over the years (to 2013, for which we have detailed industry breakdowns), construction had been a smaller segment of Auckland’s GDP than in most other regions in the country. This was the chart:

I started digging into the data a bit further, and also got in touch with Statistics New Zealand (who provided me with some prompt, very helpful, assistance, including suggesting that some readers might be interested in how they put the numbers together).  My digging didn’t resolve any puzzles, but it didn’t highlight any very obvious errors either.

The regional GDP data also have two components that should normally have a strong relationship with housing, and also with population growth.  These are:

The latter series is straightforward –  in effect, the rental value of living in an owner-occupied house, which is proxied using market rental data.

The “rental, hiring, and real estate services” is more complex.  It includes various sub-categories, for which the data are not provided separately.  Here is what is included, from a table SNZ sent me:

Ideally, I would like to look at only the LL12 and LL2 components, and thus exclude the non real estate leasing services (eg cars, machinery etc), but the data aren’t publicly available.

Surely, I thought, if Auckland’s population has been growing so much faster than the population in the rest of the country, this should be reflected in faster growth in these components of GDP.  I didn’t really expect it in respect of owner-occupied dwellings, because although Auckland rents have risen a bit faster than those in the rest of the country, rates of owner-occupation have been falling faster.  But everyone needs to live somewhere, renting if not owning, so I thought the effect should still show up if I combined the two components.  After all, the rental component also includes non-residential property, and more people generally implies more offices and shops too.

But this scatter plot is what I came up with (population growth on the x axis and growth in the sum of the two GDP components on the y axis):

I’d expected to see an upward-sloping relationship (recall, these aren’t GDP per capita components, but total GDP).  As I put it to SNZ, isn’t it a bit puzzling that growth in these two nominal GDP components over 13 years was greater in Southland than in Auckland?  Given where all the other regions sit, in a well-functioning housing market surely one might have expected the growth in these GDP components for Auckland to be up in the 140 to 160 range?

SNZ were able to tell me that there was a large growth, from a low base, in non-financial non real estate asset leasing in Southland.  That might help explain why these GDP components together grew surprisingly fast in Southland.  But it doesn’t explain why Auckland has been so weak relative to almost all the other regions (given the extent of its population growth).

Here is a chart showing Auckland’s share of total nominal GDP for each of these two components. 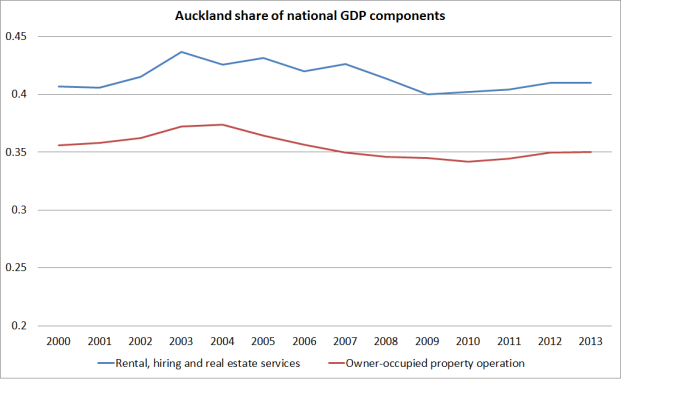 And yet over this period Auckland’s share of the total population increased from 31 per cent to 33.5 per cent.

I guess that, overall, this is not wholly inconsistent with the divergence that has opened up in the population per dwelling numbers: trending down in the rest of the country but not in Auckland as house prices become increasingly unaffordable.

Out of curiosity, I redid the per capita regional GDP numbers excluding these two real estate related components.  In my original chart, Auckland had the third slowest growth in nominal per capita GDP from 200 to 2015.   In this alternative chart, we have the data only to 2013.    Over that period, Auckland had the slowest per capita total nominal GDP growth of any region.

What about on this adjusted, non-real estate, measure?

It doesn’t improve the picture.

I’m still not quite sure what to make of all this.  Ideally, we would have regional real GDP  data, but unfortunately that does not appear likely any time soon.  But on the basis of what we have, Auckland seems to have done particularly poorly over the last 15 years, despite (or partly because?) all the policy-induced population growth.  Some of that seems to relate to the poorly functioning housing supply market.  But even abstracting from the direct effects of that, it has to be seen as a pretty disappointing outcome, leaving many questions on the table.

(It also leaves me with some new questions, which I have not yet attempted to work through in my own mind, about my explanation for New Zealand’s persistently high (relative to other countries) real interest rates.  A topic for another day.)

9 thoughts on “Regional GDP revisited: has Auckland really been that weak?”