As I noted a few weeks ago, about fifteen years ago Struan Little, then at The Treasury, sparked my interest in Uruguay, and comparisons between its long-run economic performance and that of New Zealand.  When I wrote that earlier post, I searched around to see if anything Struan had written on New Zealand’s economic performance was on the web.    Nothing was now, but it became clear that something had been.  Various old articles (eg here) referred to a paper released at the end of 2001 by Treasury, drawing “lessons from the losers” –  other reasonably advanced. reasonably democratic, countries, or regions, with some similarities to New Zealand, which had also done poorly.   The paper had even been cited by the IMF in one of their Article IV reviews of New Zealand.

The author no longer had a copy of the paper, but fortunately Treasury was able to track it down for me.  The OIA response should be on their website before too long, but in the meantime here is the document itself, “Growth and Policy in other countries: lessons from the losers”, dated 31 October 2001.

Lessons from the Losers by Struan Little

As Treasury is at pains to note, this was a personal thinkpiece, and although it was publicly released back in 2001 to influence debate and discussion, it was never finalized.  It isn’t a long paper (12 pages of text), so couldn’t cover everything, or document every caveat or qualification, but papers like this help us see the issues in slightly different ways.  It is to Treasury’s credit that they made space for the work to be done, and then put it out proactively for discussion.

In his stimulating paper, Little thinks about New Zealand’s experience in light of  eight comparators, four of which he saw as having had a “disappointing economic performance over a long period of time”

The inclusion of Switzerland might surprise some, since it is –  and consistently has been –  one of richest countries in the world.  But its productivity growth had been strikingly weak over several decades.  Overall, it is a fascinating alternative lens to look at New Zealand’s experience through  – a contrast to, say, simply looking at the US or the UK, or even the OECD as a whole.

His own view, in conclusion, was that three policy areas were paramount for New Zealand, if it was to sustain a higher growth rate in future

Any 15 year old paper on a topic of this sort is going to read a bit oddly in places –  at the time, for example, Italy was cited as an example of a notably successful economy (unfortunately it has had no per capita growth at all since then).  And although all of his four success stories remain much richer than New Zealand, each has had a new very rocky time in the last decade or so.

And whatever any author writes on a topic like this is going to be partly a product of his/her experiences and context.  2001 was two years into the first term of the Labour government, and I suspect Michael Cullen would not have been unreceptive to many of the sorts of messages in this note (which is perhaps why Treasury was able to publish it).

But I wanted to comment on one of the strands of policy Struan emphasizes, and then highlight a few that I was interested to find no mention of (perhaps partly reflecting the fact that today’s context is different to his).  And then offer a few thoughts on whether “losers’ can be saved.

“I see this as one of the key reasons why our export performance has been relatively weak compared to more successful economies.  While more extreme than New Zealand, the experience of Uruguay and the Southern Cone countries shows than an upward appreciation of the real exchange rate can undermine a reform programme and prevent a country from getting out of a low growth trap……..I would hope that improvements in our monetary framework may resolve the real exchange rate issue.”

What was the context?  We had had a relatively volatile real exchange rate in fifteen years since the exchange rate had been floated.  In 2001 the real exchange rate was actually very low –  only just off its all-time lows –  but there had been a lot of recent focus on the conduct of monetary policy.  In fact, Struan and I had been the bulk of the secretariat to Lars Svensson’s review of New Zealand’s monetary policy arrangements, which had been commissioned by the incoming Labour government –  concerned about the exchange rate, and disconcerted by things like the Bank’s unfortunate Monetary Conditions Index experiment.  That inquiry had reported earlier in 2001.

The Reserve Bank has always cautioned against emphasizing the volatility of the real exchange rate as a factor in New Zealand’s economic underperformance. As various people have noted, our real exchange rate is not extraordinarily volatile by advanced country standards –  which sample you compare it with matters a lot –  and much of the volatility reflects the real and financial external shocks the country faces. I largely agree with the Bank’s perspective on this issue –  and it isn’t obvious that much could be done to attenuate the big cycles in the real exchange rate anyway –  but we need to be open to the possibility that the impact is greater than we realise (if, eg, fluctuations in commodity prices contribute directly to exchange rate fluctuations, making it very difficult for other industries to successfully emerge and compete internationally).  But changing the details of the monetary policy framework isn’t likely to make much difference –  we’ve been through a wide variety of regimes over the decades, and had quite big real exchange rate fluctuations in each of them.

I’ve been more concerned about the average level of the real exchange rate.  Right from the early days of the reforms, experts (themselves supportive of the reform programme) have emphasized the importance of a lower real exchange rate as part of a path towards rebalancing the economy and establishing a stronger growth trajectory.  It was the Reserve Bank and Treasury view as far back as 1985.  Leading international scholars like Anne Krueger and Sebastian Edwards re-emphasized it –  partly in reference to the Latin American experience Little alludes to in the quote above.   It isn’t a line that is so widely heard in the mainstream these days, but the failure to achieve any per capita growth in New Zealand’s tradables sector in the 15 years since Little was writing suggests that the issue has not gone away.  Our persistently high (relative to other advanced countries) real interest rates look to be related to the failure of the exchange rate to adjust –  but that gap wouldn’t have been so evident in 2001. 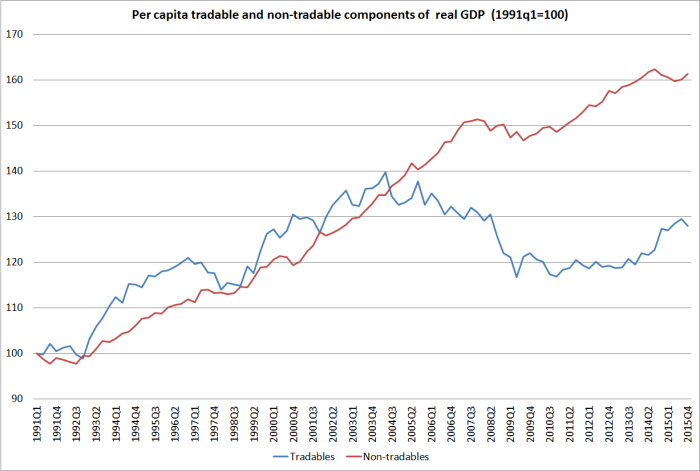 Perhaps relatedly, in his final section Little talks of the contrast between fixed and mobile factors of production, emphasizing labour (“at least to an extent”) and social institutions as fixed factors.  It was a surprise that, in an economy whose exports are overwhelmingly natural resource based, our land wasn’t considered as an important fixed factor –  an opportunity and, perhaps, a constraint.

I’m explicitly not writing to criticize Little’s paper.  There is so little good material on these issues, and his note offers a lens that helps stimulate one’s thoughst even when not fully agreeing with it.  But there is perhaps one area where experience might suggest he was a little too pessimistic.  Even his “losers” can, it seems, turn themselves around, at least to some extent.

Of course, even in 2000 we knew that in some cases –  the better countries of Eastern Europe were already rebounding from the dark decades of Communist rule.  But it seems to have been true of some of Little’s losers too.

Switzerland’s productivity growth still isn’t stellar, but the Swiss have very large net foreign assets. I checked the net national income per capita data from the OECD this morning, and over the last 15 years, Switzerland –  already richer than most –  has outstripped growth in the OECD as a whole, and in the United States in particular.

For Uruguay, I showed this chart a few weeks ago, of TFP growth over the last couple of decades. 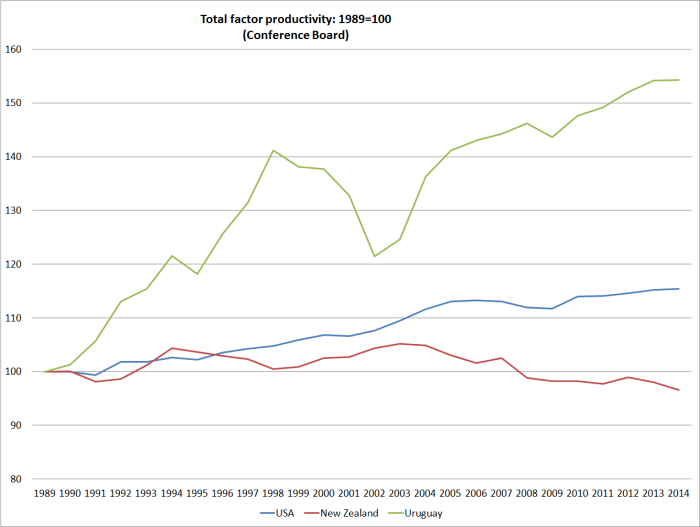 Uruguay has a long way to go, but they’ve made an impressive start. 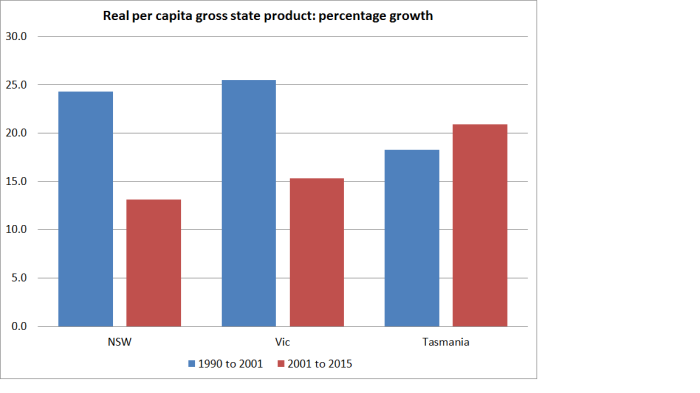 Quite a rebound in relative performance.

New Zealand, meanwhile, has shown no signs of even beginning to close any of the big gaps in productivity  –  if anything, on many measures they are still widening.

In terms of my narrative of New Zealand’s policy problems, one thing that marks out territories, states or regions from countries is that the former do not have an immigration policy.  Population growth in Tasmania may be very slightly influenced by Australia’s overall immigration programme, but largely people move to Tasmania only if the relative opportunities within Australia are better in Tasmania than they are elsewhere in Australia.    Tasmania looks like the sort of place –  like my story of New Zealand –  that can generate good incomes for a small number of people.  And in the last 25 years, Tasmania’s population has increased by around 12 per cent, while the populations of New South Wales and Victoria have increased by more than 30 per cent.   By contrast, in New Zealand’s case, the central government’s immigration policy directly boosts the population of the entire country.  Unlike Tasmania, we’ve had more than 35 per cent population growth since 1990, mostly concentrated in Auckland.  In such an unpropitious location for economic activity, it has just made it that much harder to even begin to close the income gaps.

Old papers aren’t to everyone’s taste, but the issues Little’s paper treats (or those treated in my own speculative entry to the field from a few years ago) haven’t gone away.  Unfortunately there is little sign of our political leaders –  government or opposition –  really doing much to reverse the decline of this “loser”.