The Prime Minister, a large flock of New Zealand business people, and various media representatives are in China.  It is not a particularly attractive sight, perhaps one of many reminders of why bilateral or regional preferential trade agreements are such an unfortunate policy option (as leading trade experts, and entities like the Australia Productivity Commission often remind us).  Allow for some trade diversion risks, and the ever-more-entangled rules of origin, and such deals are often bad enough.  And then there is the matter of making repeated obeisance before the leaders of a tyrannical regime, begging for their favour; the crumbs off their table.   Perhaps worst of all, our elected leaders don’t even seem to find it distasteful.

New Zealand firms do a fair amount of trade with Chinese firms, and that trade has increased considerably in the last decade. Despite some breathless commentary, China was never our largest “trading partner”,  but New Zealand firms do more trade with the Chinese than with firms and individuals in any other country than Australia.  But then our trade is quite widely spread across many countries, and much of it is in products which are pretty homogeneous (it isn’t clear that it much matters whether New Zealand firms export dairy products to Venezuela, Saudi Arabia, or China: New Zealand producers sell somewhere whatever is produced, and what matters most is the global prices for dairy products).  There is a great deal of talk about the benefits (or risks) of being concentrated on whole milk powder (WMP), but the prices of the various different dairy products all seem to cycle together, and idiosyncratic patterns for individual products don’t seem to last for long.   (GDT only has a long run of data for these three, but over the last five years one can also see it in a chart from a wider range of dairy products). 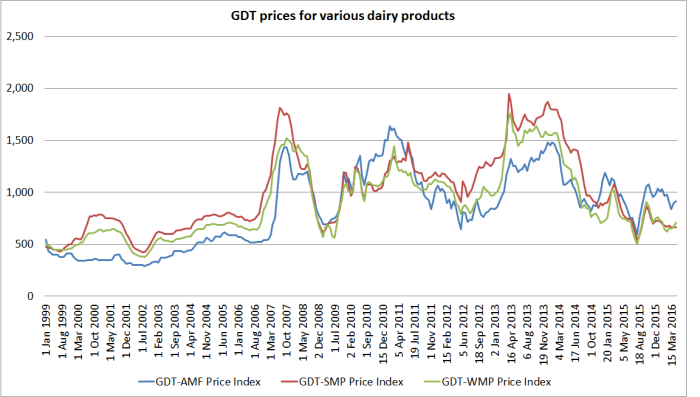 Here are our merchandise (goods) exports to China as a share of GDP. 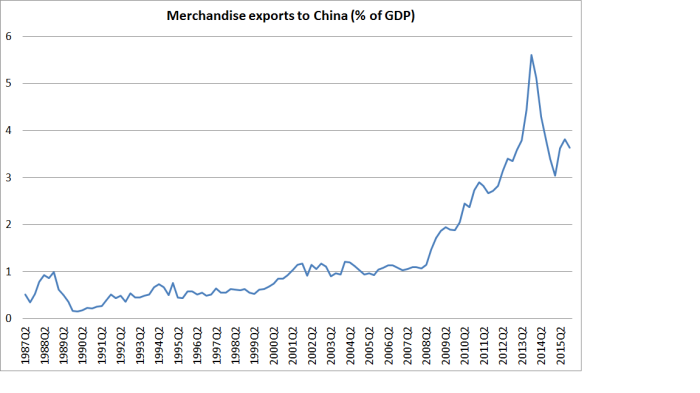 Services exports data by country is only available annually.  Here are total New Zealand exports to China for the last four (June) years.

But how much difference has it all made?  The government has made much of trying to lift the export share of GDP, but here is a chart of that series.

Which has, as I’ve noted previously, been going nowhere for 25 years now.

Of course, New Zealand firms import a lot from China as well.  Here is the merchandise trade balance between New Zealand and China since 1981.

But once services trade is included, for the last three years New Zealand has run a goods and services surplus with China.

“But we in New Zealand will take that view from a Government perspective, that we’re a fast-growing economy, we want to to develop great international relationship and we also want to have a higher standard of living. We fundamentally don’t have enough private-sector capital of our own to fund that growth.”

Set aside the “fast-growing” economy claim for now – I guess the total economy has been growing quite a bit by OECD standards, even as per capita growth has been pretty dismal –  but what really struck me was the observation that “we fundamentally don’t have enough private-sector capital of our own to fund that growth”.  If the Prime Minister simply means that we run current account deficits (in which total domestic investment exceeds total national savings) that is, of course, true.    But it is not as if we have any trouble financing that current account deficit on world markets –  apart from any other indicators, that is evident in the persistently high level of the exchange rate.  Countries that have trouble financing themselves tend to have persistently weak real exchange rates.  We don’t.

To be clear, I have no particular problem with foreign direct investment, and in general I think we should have fewer restrictions on it.   China is a slightly different issue, but mostly because all major businesses are ultimately state-controlled. I’m not suggesting any specific restrictions on Chinese FDI (except perhaps where national security considerations warrant it) but we need to remember just how badly distorted and underperforming China’s economy is.  It isn’t exactly one of the success stories of market capitalism, unlike say Taiwan.  New Zealand hasn’t done well in recent decades, but for all its fast growth (much real, some probably illusory), China’s overall levels of productivity are still astonishingly poor.

The better of China’s firms may be very good at managing the twisted eddys of Chinese politics.  That is very different from thriving in a proper market economy, where the rule of law prevails, and connections to the powerful don’t (or are not meant to) matter much.  If FDI from China happens, so be it and some it may add wider value, but it isn’t the most obvious place to be pursuing FDI from (if politicians should be doing such marketing at all).  The real gains from FDI aren’t dollars of foreign capital but rather the ideas, technologies etc that really successful global firms can bring with them, with spillovers into the New Zealand business sector and the wider New Zealand economy.

And all this is without devoting space to our apparent studied indifference on the South China Sea issue (“we aren’t taking sides, we just want a resolution”, as if there is no difference between tyrannies and democracies –  Philippines and Japan for example), or talk of extradition treaties with China.  If people can be shown to have lied on their immigration applications, no doubt we should revoke their approval to be here, but are we seriously comparing the so-called “justice” system of China to that of countries like our own?   For all the talk of “fugitives” in New Zealand, we need to remember that much of the so-called anti-corruption programme of the last few years has been about purging those who got offside with the winners in the latest Party realignments.  Some of those now abroad might well be “bad guys”, but it isn’t clear that any people who matter in China’s government are, in any sense, “good guys”.

Finally, in all our enthusiasm for trade with emerging China, I amused myself yesterday by downloading the 1939 New Zealand Official Yearbook to see what trade we were doing with Germany and Japan in the 1930s.  Not much with Germany, but I’m imagining there must have been some breathless enthusiasm, at least in some circles, about our rising trade with large and emerging Japan, by then our third largest export market.

9 thoughts on “China and New Zealand”