My post follow-up post yesterday on Auckland’s surprising weak performance in the regional nominal GDP data over the last 15 years prompted a reader to get in touch suggesting that changes in the terms of trade over the period were sufficient to explain why the provincial areas generally seemed to have done well, and Auckland and Wellington had not.

I had been conscious of the possible role for terms of trade changes in explaining the patterns –  these, after all, were nominal GDP data, and ideally we would have liked real series – but hadn’t gone much beyond that.

To see the issue, I’ve set up a very simple stylized version of New Zealand.  This New Zealand has just two, highly stylized, regions.  One produces all the foreign exports of the country (Region A), and the other (Region B) generates lots of domestic services, many of which are supplied to Region A.  You could think of these services as being banking, electricity generation, advertising or whatever.  And each region produces lots of stuff that is consumed within its own region, and each also assumes the same amount of foreign imports.  Both regions have GDP of 500, and Consumption of 500.  (For this little illustrative exercise, I’m just assuming away investment, and any current account deficits/surpluses.)

Now what happens if the terms of trade double?

It depends greatly on whether import or export prices change.

If foreign export prices double, then the value of region A’s exports will jump from 200 to 400, and the value of nominal GDP in region A will increase to 700.   Region B’s nominal GDP is unaffected (it doesn’t export anything internationally).  Over time, if the higher prices are sustained, it is likely that there will be other consequential changes: consumption in A will tend to rise, and with it both foreign imports and purchases from region B.  But the shock has clearly favoured region A, raising its nominal GDP relative to that of region B.

But what if the terms of trade double through a halving of import prices?

The immediate impact depends in part on what happens to domestic prices.  If import prices halve, and none of that is passed through to consumers, nominal GDP in both regions will rise by 50 (the size of the reduction in the import spend).  If the lower import prices are fully passed through to consumers, nominal GDP won’t change at all  in either region (lower consumption prices will offset the lower import spend).  Again, over time the gain in the terms of trade will affect behavior (presumably there would be more consumption, and perhaps a higher volume of imports), but for these purposes all that matters is that the shock has hit the two regions equally.

This is all deliberately highly stylized, and says nothing about actual New Zealand (although you might be thinking that somewhere like Auckland might resemble region B and Southland or Taranaki might resemble region A: in the most recent year for which we have detailed industry breakdowns, 13 per cent of Auckland’s GDP was from primary sectors and manufacturing, while 56 per cent of Taranaki’s was).

The terms of trade increased very substantially in New Zealand from 2000 to 2015 (March years), the period covered by the regional GDP data.  The increase over that period was 31.7 per cent.

But most of the gain has been realised in the form of lower import prices.  Export prices have increased, in New Zealand dollar terms (and the nominal GDP series are NZD series), by only about as much as the consumption and investment deflators.  What stands out is that import prices have fallen by 4 per cent over 15 years.  What has been going on?

First, the real international prices of a lot of imports have been falling –  a beneficial effect of the rise of China and other emerging manufacturing centres.   And, second, the exchange rate has risen very substantially over that period (up 33 per cent on the Reserve Bank’s TWI measure).  Global prices of many of New Zealand’s exports certainly rose over that period, and New Zealand as a whole was better off as a result, but the higher exchange rate meant that, on average, export-focused regions didn’t get the gains of the higher terms of trade (nominal GDP in those regions wouldn’t have risen systematically faster than that in less export-oriented regions).  If we take the six components of the ANZ Commodity Price Index over the 2000 to 2015 period, meat and dairy prices rose modestly in real NZD terms, while the other components (horticulture, seafood, aluminium and forestry) saw falls in their real NZD prices over the full 2000 to 2015 period.    Much of this process is discussed at greater length in an Analytical Note published by the Reserve Bank a couple of years ago.

Instead, the terms of trade gains came mostly in the form of cheaper real import prices, benefiting people in all regions (including Auckland).

Ideally, we would still like to have region-specific GDP deflators.  In some regions with a heavy weight on dairy exports, the rise in the terms of trade may help explain with that particular region’s nominal GDP per capita has done quite so well relative to Auckland’s over this particular 15 year period but (a) the rises in real NZD dairy prices over the full period weren’t that large (around 15 per cent, if deflating with the private consumption deflator), and (b) even in the Waikato total agriculture is only around 10 per cent of GDP).  The differences in GDP per capita growth rates across regions (illustrated in yesterday’s post) swamp anything that can be explained largely by terms of trade effects.

Wellington-boosters (such as the dreadful Wellington City Council, its “economic development” agency, and the myriad of “booster” mayoral candidates) probably take some consolation from the fact that, according to the regional GDP data, if Wellington hasn’t been doing overly well, at least it hasn’t done much worse than Auckland.  I’m not sure they should take such comfort.  Over this 15 year period, the private consumption deflator has increased by 31 per cent, but the government consumption deflator has increased by 51 per cent.  The production of government consumption goods makes up a great deal of economic activity in Wellington  (“public administration, defence and safety”  is around 11 per cent of Wellington’s GDP and 3 per cent of Auckland’s).  If we had real per capita GDP data for the regions, Wellington might be lagging even more  –  and specifically further behind Auckland –  than the nominal data suggest.

On the other hand, I wondered if there was at least one factor overstating Auckland’s performance.  In the national accounts deflators, the deflator for residential investment increased by 85 per cent over the 15 year period, while the private consumption deflator had increased by only 31 per cent.  And it isn’t just residential construction activity that has seen large price increases: here are the construction-related components from the Capital Goods Price Index for the same period. 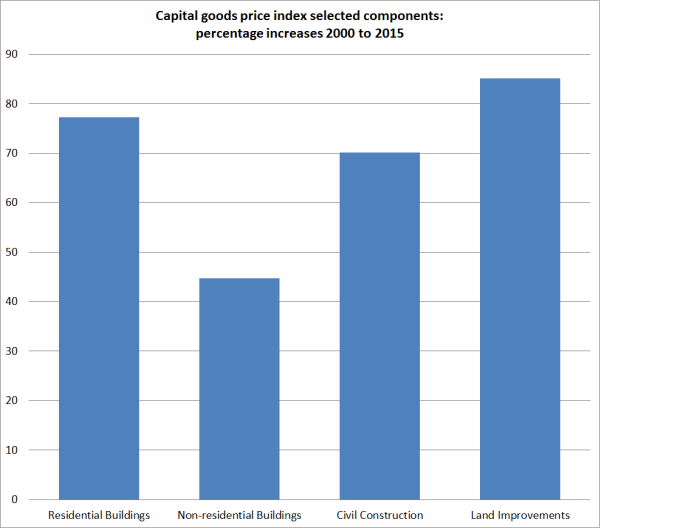 Surely, I thought, Auckland’s rapid population growth over this period (see earlier posts) would have meant a larger share of Auckland’s GDP was in construction-related activities.  If so, the higher inflation rates for these sectors would tend to boost nominal GDP.

We only have detailed industry breakdowns by region to 2013, but I was a little surprised that when I calculated the average share of construction in each region’s GDP over 2000 to 2013 this is what I came up with.

Auckland has certainly had a lot more construction activity (share of GDP) than Wellington, but beyond that I have no idea what to make of the results.  They don’t seem very plausible numbers,  but then SNZ collects the data.

There is no point putting too much weight on regional nominal GDP data.  But they do throw up some results that were unexpected (at least by me), and the apparent underperformance of Auckland over this particular 15 year period doesn’t seem easily able to be explained away simply by the effects of terms of trade changes. (Even if it could, it might be troubling that so many people were gravitating to a region that  – the market was signalling –  relative price changes were not favouring.)

And, to repeat a point I made yesterday, there is no necessary reason why simply putting more people in Auckland would raise the productivity of the city.  To those who assure me that agglomeration economies are real, I respond, well, yes, of course.  The question is not, and has never been, whether many (although not all –  see natural resource extraction) high value functions/industries/activities function most productively in big cities.  The economics of agglomeration helps describe why big cities exist.  But the question –  an analytical one, but one New Zealand practical policymakers need to think seriously about –  is whether Auckland is one of the places where firms undertaking many increasingly high value activities will increasingly choose to cluster.    There is no necessary reason why it should be.  Most places aren’t.  There are reasons why there aren’t half a million people in Invercargill or Launceston –  or Helena, Montana or Kearney, Nebraska .  Wishing it were otherwise does not make it so.

There seems to be a strong element of wishful thinking (or “build it and they will come”) about the policymakers’ (and their advisers’) Auckland story.  One could mount an argument –  not necessarily a fully compelling one, but one with substantial elements of truth to it –  that Auckland’s current relative size is largely a function of two big policy interventions.  The first was the high level of manufacturing protectionism that prevailed from the 1930s to the 1980s. Manufacturing firms all over the country benefited, but if one was producing things just for the local market, being in the biggest city made a lot of sense.  The South Auckland manufacturing base grew up during that period.  And the large scale immigration programmes ended up with the same effect, boosting Auckland’s population dramatically (particularly as immigration became increasingly non-Anglo), and generating a deal of economic activity in non-tradables sectors simply to support the infrastructural needs (broadly defined) of a rising population.  But there has never been any sign that Auckland is a location that has the economic opportunities that encourage the growth of new high –productivity industries successfully taking on world markets.  New Zealand’s export base remains overwhelmingly natural resource based –  dairy, wool, meat, fish, oil and gas, gold, wine, forestry, and tourism (most of the appeal is the landscape not the great art or glorious cathedrals).

I’d really like to be wrong, but where is the evidence that incredibly strong population growth in our major city, fuelled largely by immigration policy (New Zealanders, net, have tended to be leaving Auckland, not drawn to its great opportunities), is generating the national benefits the advocates would claim for it?  At present, it looks as though this Think Big strategy is perhaps even more flawed than the 1980s energy version (fortunately called to a halt quite quickly) was.

13 thoughts on “Can the terms of trade explain Auckland’s apparent underperformance?”