In the wake of the upset Australian election result on Saturday, I thought it might be a good day for a quick post on some Australia/New Zealand economic comparisons.

I often bang on about New Zealand’s atrociously poor longer-term economic performance, but if Australia’s longer-term performance is less bad by comparison, we are about the only country that makes them look less bad.

At present, for example, average real GDP per hour worked in Australia is about 15th in the OECD, with quite a gap to 14th.   To New Zealand readers that probably doesn’t sound too bad, said quickly, but in 1970 –  when the OECD series starts – Australia ranked 8th.   A hundred years or so ago, on the eve of World War One, Australia’s real GDP per capita –  the only measure for which there are long-run historical estimates –  was 1st equal among the countries that now make up the OECD (with New Zealand and the United States).

But my particular focus this morning is exports, as a share of GDP.   There is an old mercantilist sort of view –  which at times seems to be held by Donald Trump –  that somehow exports are a superior form of economic activity, and that whereas exports are in some sense good, imports are bad.  That isn’t my story at all.   Exports and imports are both good –  gains from trade and all that.  In many respects, at least at a national level, one doesn’t go too far wrong in saying that we export so that we can import.  Of course, firms export not countries, but over time and in the aggregate, our appetite for cars, jet aircraft, overseas holidays or Hollywood movies is only able to be met if we find other products and services we (firms based here, employing us etc) can successfully sell to the rest of the world.  And since, especially for small countries, there is a lot bigger market in the whole world (even just the whole advanced world) than at home, export success often tends to go hand in hand with wider economic success: it isn’t that the exports, per se, make you prosperous, but that you’ve been able to generate (or even dig up) products and services that other people will pay for: you’ve passed the (demanding) market test.   Empirically, countries that have sustainably caught up –  in GDP per capita or GDP per hour worked terms –  almost without exception have had strongly performing export sectors.

But what about New Zealand and Australia?

Here is the (nominal) share of exports in GDP for the two countries for the period since our quarterly data starts in 1987 (as the paeans to Bob Hawke last week remind us, at the time both countries were doing fairly far-reaching economic reforms).   This is simply the nominal value of exports over nominal GDP. 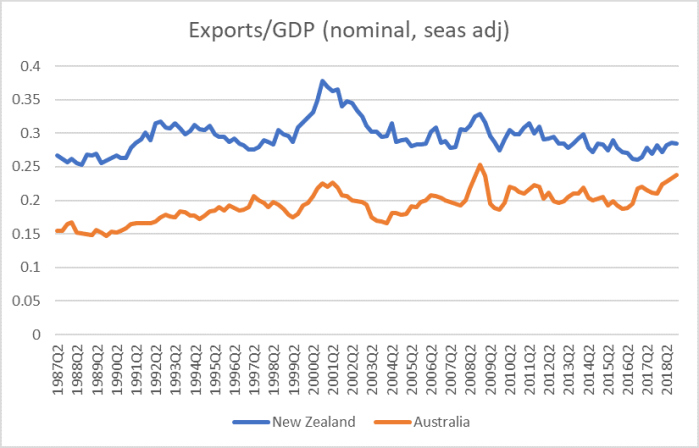 That gap has closed, a lot, over the decades, perhaps especially over the last 15 years or so.

It is worth remembering two stylised facts:

In economic terms, New Zealand and Australia are almost equally remote (arguably they a bit more so than we, since Australia is big relative to New Zealand).  So, all else equal, one wouldn’t really expect a country five times the (population) size of the other to be exporting a similar share of their GDP –  New Zealand should be well ahead.

There is another possible exports/GDP measure. This chart uses deflated (“real”) series for both exports and imports.  Statisticians tend to frown on it –  and I mostly don’t use it –  but it does strip out the direct effects of terms of trade fluctuations, which (for Australia in particular) can be large.

In New Zealand, there has been no increase in the volume of exports as a share of GDP this century.  In Australia, by contrast (and after a flat period) there has been a substantial increase this decade, primarily as the newly-exploited mineral resource projects have come on stream.   In both countries, the real volume of exports has increased – in New Zealand’s case by about 50 per cent since 2002 –  but in New Zealand trade with the rest of the world is a smaller share of GDP now, and in Australia it is larger.

Of course, even this story has its complexities.  Much of the mineral sector operating in Australia is foreign-owned, so that a chunk (but by no means all) of the benefit of the export surge is accruing to foreign shareholders rather than to Australians.  But without the surge in mineral exports –  a windfall to a considerable extent (although with a policy framework that allowed developments to proceed) –  it is hard not to look at Australia and conclude that on the present suite of economic policies –  much the same as prevail in New Zealand –  their relative productivity and income performance would have deteriorated even further over the years.

Perhaps the gaps between New Zealand and Australia would have narrowed a bit, but from the wrong direction.  Much better would be if both countries were doing something that credibly might move them back up the advanced country rankings.   If the re-elected Coalition is less likely to further damage Australia’s economic prospects than Labor, no party on either side of the Tasman really seems to have serious analysis or ideas –  or to particularly care – about reversing decades of relative decline.