A reader sent me the link, and this is what Google Translate generates: 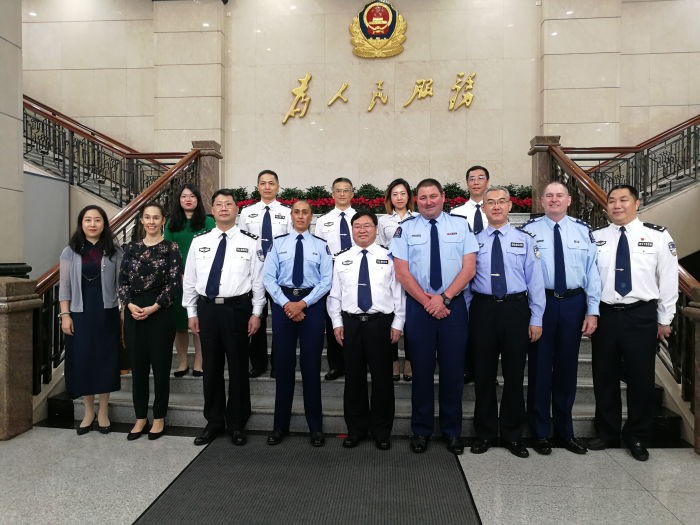 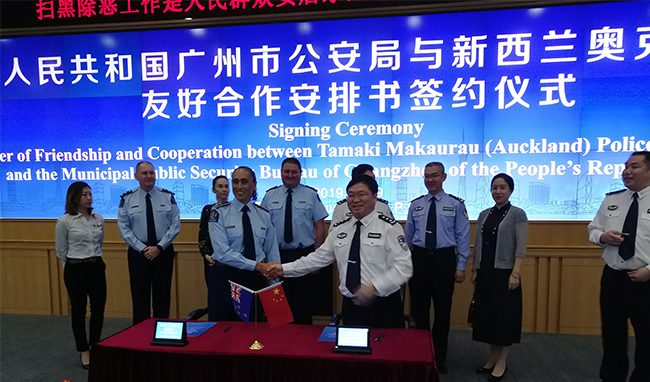 To celebrate the 30th anniversary of the conclusion of the international friendship city relationship between Guangzhou and Auckland, and to strengthen the police cooperation between the two cities, Yang Jianghua, deputy mayor of Guangzhou and director of the Municipal Public Security Bureau, and the assistant police chief of the Auckland City Police Department of New Zealand on April 29 Lena Hassan ( Naila Hassan ) signed a “friendship and cooperation with the Guangzhou Public Security Bureau Auckland, New Zealand Police to arrange the book” in the Guangzhou Municipal Public Security Bureau. It is reported that this is the first time that the Guangzhou police and foreign police have signed a cooperation intention, which indicates that the law enforcement agencies of the two places will formally cooperate in police exchanges and police training.

“Police exchanges” with the Guangzhou branch of the Ministry of Public Security………..  Surely this cannot mean that MPS officers will be let loose with law enforcement powers in New Zealand?  Surely…..

I wonder if Police, or their Minister, were ever planning on telling New Zealand citizens and voters about their deal with the PRC domestic repression apparatus?

Yesterday, I mentioned the Gestapo, but one doesn’t need to invoke (quite valid) Nazi comparisons with the People’s Republic of China.   Would Police – or elected governments – have thought such friendship and exchange deals were appropriate with the domestic security forces of the Soviet Union, or Pinochet’s Chile, with Galtieri’s Argentina, with apartheid South Africa, or……or…..or……

It just should not be.  And it clearly isn’t the case that this is just normal stuff (“everyone does it”) –  it is the PRC side that stresses that this is the first such arrangement for Guangzhou.

I’m not fond of the phrase “social licence”, but if it must be used this is an example of how government agencies –  allegedly working for our interests –  risk forfeiting theirs.

I will be lodging an OIA requesting details of this agreement.

I’ve been following the views of Tyler Cowen for almost 30 years now, since he spent some time in New Zealand doing a review for the Business Roundtable of the (then) new Reserve Bank of New Zealand Act.    These days he is a prolific and prominent writer –  columnist and blogger –  and a professor of economics at George Mason University, all supported by (apparently) voracious reading.   There is almost always something stimulating and fresh in what he has to say.

But he doesn’t always get it right.  Back in the very early days of the Trump presidency, he ran a column on parallels between Donald Trump and our own Sir Robert Muldoon. I begged to differ, and mostly I reckon my argument looks stronger now than it did in early 2017.

A few days ago he had a column in the Washington Post (extracts here) drawn from his recent book “Big Business: A love Letter to an American Anti-Hero”.  In his column he argues that (so-called) progressives in the United States should embrace big business and see it as an ally in the causes they champion.   On some of the specific issues he lists, there is probably something to what he says (and I’m with him in pushing back against the Elizabeth Warren approach to capitalism and business), but as a general proposition (which is what he makes it out to be) what he claims –  that companies are a source of social and political good, going beyond merely the production they facilitate – is at very least arguable.

Thus, we are told that various large US companies “offered health care and other legal benefits for same-sex partners well before the Supreme Court legalized gap marriage”, and that these moves “put a mainstream stamp of approval on the notion of same-sex marriage itself”.   Some will have regarded all that as a good thing – certainly (which is Cowen’s specific point) the so-called progressives will have.   And in that case, one person’s additional remuneration doesn’t directly impinge on anyone else’s.

One could take the argument further.  There are papers around illustrating the way in which companies operating buses or street cars in the segregated American South championed the cause of bus desegregation.  That wasn’t because the owners were necessarily any more “enlightened” than the rest of the white populace, but because having segregated facilities cost them money.  Desegregation was cheaper and more profitable.

More generally, one of the arguments against the idea that there is some sort of meaningful gender pay gap, arising out of discriminatory practices, is that economic incentives are pretty powerful and should contribute to eliminating any such substantial differences –  if equally productive female workers can be had more cheaply than male ones, there are expected returns on offer to firms that focus on recruiting those women.  In the process, wages for women are bid up and, over time, any excess returns are eliminated.   In apartheid South Africa, it was the white unions not the mining companies that had a compelling interest in preventing the employment of blacks in skilled or supervisory positions.

So a competitive market economy probably is quite good at taking out any differences in remuneration based on employee characteristics that are irrelevant to the production process itself (the relentless tendency towards wage=marginal product), and it is also good at chipping away at regulatory and other barriers that impede the ability of shareholders to maximise risk-adjusted returns.    Street-car segregation might be a positive example of the latter, but it isn’t hard to think of less-positive examples (and as someone who favours low taxes on business and light-handed regulation of the financial system I’m not even going to those “progressive” favourites).  One could think of all manner of corporate welfare programmes that many firms fall over themselves to champion and defend (and which anyone who rejects using them can find themselves pushed beyond the margins of profitability), or incentives around environmental regulation, or financial system bailouts, firms that attempt to portray their corporate interest as the same as the national interest (eg those championing tariffs), or whatever.

And we could revert to Tyler Cowen’s example around attitudes to homosexuality.  He argues

The larger the business, the more tolerant the institution is likely to be of employee and customer personal preferences. A local baker might refuse to make a wedding cake for a gay couple [celebration of a their “wedding”]  for religious reasons, but Sara Lee, which tries to build very broadly based national markets for its products, is keen on selling cakes to everyone. The bigger companies need to protect their broader reputations and recruit large numbers of talented workers, including from minority groups. They can’t survive and grow just by cultivating a few narrow networks as either their workers or customers.

And yet it is Rugby Australia, pressured by large corporate sponsors, which is attempting to sack Israel Folau for quoting the Bible on his own social media accounts on matters quite unrelated to the production of rugby services.  The idea that large firms are generally tolerant of employee preferences and views seems hard to credit these days –  perhaps, on average, they are individually more tolerant of some differences than individual small firms, but individual small firms have much less market power (more places for employees to choose to work).

What is probably true is that big corporates don’t care who they sell to (there is a dollar in it) but are –  and perhaps always were, but on different issues –  quite intolerant of employees with a mind, or conscience, of their own.  The Colorado baker managed to get the backing of the Supreme Court for not being willing to bake a cake explicitly for the celebration of a gay “wedding”, but if an employee of a major chain had attempted to exercise the same freedom of conscience, most likely they’d have been out of a job.   Again in the US context, Brendan Eich was forced out as CEO of Mozilla for having made a modest donation to a campaign against legalising same-sex “marriage”.    In the last few weeks, a major tech company sent out a message to all staff, apparently cautioning that if staff weren’t totally onside with the corporation’s “diversity and inclusion” programme, it could affect their pay or even their future employment.

Now, in many respects those examples go to Cowen’s point: much of US big business is very much of the same ideological hue as the political “progressives”, at least when it comes to social issues.

But here again there is another side to the issue.   When Wilberforce was leading the fight to abolish the slave trade in the British Empire in the early 19th century, it wasn’t big business interests that were right behind him –  indeed, when slavery itself was finally abolished, it was only possible with large compensation payouts to those who had enriched themselves on maintaining in slavery their fellow human beings.

Or nearer to our time, take attitudes to the People’s Republic of China and the way that evil regime represses its own people (generally) and systematically persecutes various minorities (Muslims in Xinjiang, Falun Gong, Christians, human rights lawyers and so on).  It is business interests that quake at the very thoughts that political “leaders” in countries like our own might even speak up and speak out against such evil, business interests that sully themselves (but presumably don’t see it that way) by continuing to trade with the regime.  Fund managers continue to buy shares in Hikvision and similar companies.  And none of this is new –  foreign companies operating in apartheid South Africa might have wanted to be able to use labour more efficiently, but they had no interest in upsetting the regime; various US companies remained actively involved in Nazi Germany right up to December 1941, and few German companies displayed any great moral courage or leadership either.

This isn’t intended as an anti-corporate or anti-business post.  Private businesses are the form through which much or most of the staggering material wealth we enjoy today is realised.   But businesses are owned, staffed, and run by human beings, and are unlikely to be consistently any better than those human beings.   If anything, and around the limits and taboos that societies might seek to establish and maintain, they will often be worse –  even as they remain very narrowly efficient in marshalling inputs and generating outputs.  Why?  Because of the impersonality of the (widely-held) corporate form and the impersonality of the pressures on them. Widely-held firms are prone to pressure from the mob – on issues that mob has focused on in that particular moment – and, on the other hand, people near the top of a firm can detach from any strong personal ethical sense –  having perhaps a lot to lose individually –  under the guise of excuses like “everyone else is doing it”, or “fiduciary responsibilities”, or a focus on the share price.  Widely-held firms have no particular interest in any values or interests that don’t work to lift the firm’s own bottom line (thus no particular commitment to democracy, or transparency, or whatever, or about the character of those with whom they trade, so long as they honour contracts).   That can have positive elements to it –  the firm just gets on and uses resources efficiently – but stops doing so when firms themselves become political players.  We don’t let firms vote, but we do allow them to donate to political parties, and (more importantly) we give their bosses and boards access and influence in the corridors of power, in ways that aren’t always aligned that well at all with the values and interests of citizens.

So count me sceptical of paeans to big business.  We probably need to be almost as sceptical of them in many circumstances as we should be of big government.