Skip to content
Home“This country has prospered over the past decade, while other economies have suffered”

The title to this post was taken from the latest column from veteran political journalist Barry Soper.  Apparently he had had some readers get in touch, not entirely convinced by his PRC-related articles earlier in the week.

They all ignore the fact that this country has prospered over the past decade, while other economies have suffered.

The Key Government’s management of the global financial crisis has been lauded but without the free trade agreement, signed in the Chinese capital as the final act of the Clark Government, this country wouldn’t be where it is today.

The puerile keyboard warriors’ bile is too vile to repeat but it seems to be based on envy, that the Chinese, after generations of deprivation, have shown the world they can compete and are a force to be reckoned with.

I’m not sure quite what he bases these assertions on (although it is the sort of line that less well-grounded champions of Beijing, including former Foreign Minister, Murray McCully, have repeatedly tried to run).  “Be grateful, peasants” seems to be the tone, for the CCP in Beijing has graciously bestowed its bounty upon you.

I don’t want to waste much time on the alleged PRC success story.    When you do so much damage to yourself, and then stop the self-destruction, of course you’ve got plenty of ground to make-up, and with half-decent policies you can do some of that quite quickly.   Here are the latest Conference Board productivity estimates. 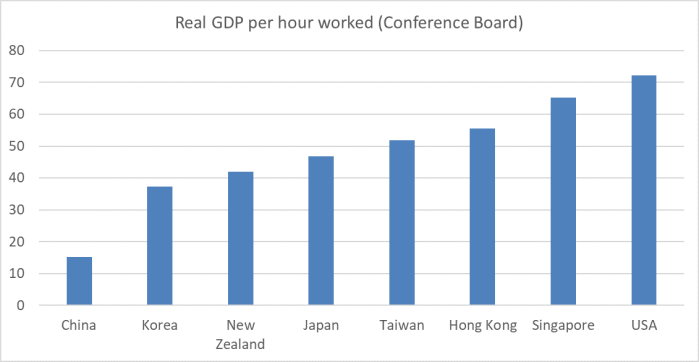 The PRC……not even half the levels of Korea or (decades of underperformance) New Zealand, not a third of Taiwan or a quarter of Singapore.     Who could possibly envy that sort of performance?  There was no obvious reason why China could not have matched the performance of Korea, Japan, or Taiwan.  Except that they chose to adopt, and continue to run, a system that consistently produces poor economic results.

But what I was really interested in was the assertion that New Zealand has had a really good economic performance over the last decade “while other economies have suffered”.  I guess if Greece, or even Italy, is your benchmark it isn’t too far wrong.  But then almost everyone does better than those troubled euro-crippled economies.

One comparison I like, and which I’ve run before, is between New Zealand and the United States.   Were there anything to the “we owe such a debt to Beijing, and have done so well ourselves” story, an obvious place to look might be a comparison with the United States.  After all, the US was the epicentre of the financial crisis itself, their central bank got to the limits of what it could do, and no one thinks Beijing someone “saved” the US.   And yet here is how real GDP per capita compares across the two countries since late 2007, when the last recession began.

We’ve mostly done very slightly better than the US over the decade or so, but there really isn’t much in it.   Certainly not a case of the US suffering and us “prospering”, whether thanks to Beijing or any other cause.

And to the extent we’ve done a touch better, it certainly isn’t reflecting stronger productivity growth.  The data are indexed to 100 in 2007.

It isn’t just an us versus the US comparison either.  Over that decade, real GDP per hour worked rose by 4.4 per cent, but in the median OECD country productivity growth was 8.9 per cent.

And if Beijing and the (so-called) free trade agreement were the source of any special New Zealand prosperity, exports might be an obvious place to look.  Except that over the previous decade New Zealand exports actually fell a little as a share of GDP.  In the United States, and in all but a handful of other OECD countries, exports became a larger share of the economy.

Even on more purely cyclical measures, New Zealand still doesn’t stand out (at least on the good side).  The unemployment, for example, has come down a long way, but it is still quite a bit above the lows reached before the recession (at a time when demographics will be tending to lower the “natural” rate of unemployment).    In the United States, by contrast, the unemployment rate is below pre-recession levels. That is also true across the G7 as a whole, the EU as a whole, and the OECD as a whole (individual bad euro-area countries notwithstanding).

And if you don’t like the idea of comparing against the US –  even though it was the centre of crisis, and doesn’t owe anything in particular to Beijing –  here is how we’ve done against another group of countries, each now with productivity levels similar to those in New Zealand (and few doing much trade with the PRC).   Since all these countries started (in 2007) with productivity well behind global frontiers, all should have been able to do okay even if productivity growth at the frontier (eg US and northwest Europe) slowed. 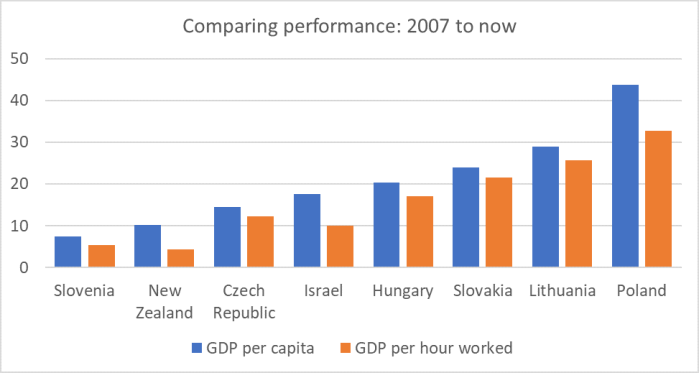 Many did pretty well.  As for us – Beijing (alleged) beneficence notwithstanding –  either worst or second worst depending on your preferred measure.

As I noted earlier on, there are countries that have done a great deal worse than us.   But the suggestion that we have “prospered” over the last decade –  in some way materially outstripping the rest of the advanced world –  isn’t just a myth. It is worse than that.   And the people who run the story, whether as senior journalists or senior politicians should know better.

Countries mostly make their own prosperity.  We once did –  those decades when we really did lead the world.    We could again, although that might involve facing facts.  But these days politicians and their acolytes in the media seem more interested in playing distraction; in this case continuing to corrupt our system, supported by motivated fantasy stories about our (alleged) success and our (alleged) debt to Beijing.

39 thoughts on ““This country has prospered over the past decade, while other economies have suffered””