This is getting to be a bit of a half-yearly ritual, but politicians’ words are one thing, and the best professional judgements of our Treasury forecasters are another.   The latter aren’t necessarily very accurate at all, but as their website blares

Heaven help New Zealand you might think, given that both Treasury and the government seem lost in the nebulous alternative reality of the living standards framework, wellbeing budgets, and a grab bag of alternative indicators that may –  or may not –  matter to anyone much other than them.

But they are the official advisors, charged by law with producing independent forecasts twice a year.   And the forecasts I’ve been particularly interested in for a while have been those for the export (and import) share of GDP.  The previous government, somewhat unwisely set themselves numerical targets for the export share of GDP –  reality bore no relationship to the targets.  The current government avoided that particular mistake, but senior ministers –  all the way up to the Minister of Finance and the Prime Minister –  talk regularly about rebalancing the economy and gettings the signals right in ways that lead to more exports and higher productivity.

But here are the numbers, for exports as a share of GDP, from last week’s economic and fiscal update.

You can read the earlier decades in various ways.   If you wanted to be particularly negative you could note that we got to an export share of GDP in 1980 which we haven’t sustainably exceeded since then.  But if you were of a more charitable disposition you might suggest that, broadly speaking, things were still getting better until about 2001 (although you shouldn’t put much weight on that peak –  it was an unusual combination of a year of a very weak exchange rate and very high dairy prices).  But this century hasn’t been good, and this decade has been bad.

As a reminder it isn’t that exports are in some sense special, but that successful economies typically have plenty of growing firms that are producing goods and services that are making inroads in the very big market of the rest of world.  That, in turn, enables us to enjoy for of what the rest of the world produces.   For small economies in particular, exports are typically a very important marker.

If you were of a generous disposition you might note that a temporary dip in the export share of GDP might not have been unexpected, or even inappropriate, for much of this decade.  After all, the Canterbury earthquakes meant that resources had to be diverted to repairs and rebuilding, and resources used for one thing can’t be used for other things.  The exchange rate is part of the reallocative mechanism.  And the unexpected surge in the population, as a result of high net immigration (a good chunk of it changing behaviour of New Zealanders), arguably had the same sort of effect.

But the largest effects of the earthquake are now well behind us, and even net immigration inflows are also dropping back.   And yet the Treasury forecasts –  the orange line in the chart –  show no sustained rebound in forecast export performance at all.   In fact, by the final forecast year (to June 2023) the export share of GDP will be so low than only one year in the previous thirty will have been lower.  Not only is there no sign of a structural improvement –  a step change that might one day see New Zealand exports matching or exceeding turn of the century levels –  there isn’t even a reversal of the decline this decade, which might plausibly be attributable to unavoidable pressures (eg the earthquakes).

For anyone concerned about the long-term performance of the New Zealand economy –  which appears to exclude our political officeholders, who could actually do something about it, but choose not to –  it is a pretty dismal picture.  Something like the current level of the real exchange rate seems to be Treasury’s “new normal”, and absent huge positive productivity shocks that is a recipe for continued structural underperformance.

Still on the HYEFU, I’ve long been intrigued by the Labour-Greens pre-election budget responsibility commitment around government spending (which continues to guide fiscal policy).

As someone who thinks that there is plenty the government spends money on that just isn’t needed (and eliminating which would, in turn, leave room for some of the areas where more spending probably is needed), this commitment has never really worried me. But then I’m not a typical Labour/Greens voter.

But if it didn’t bother me, it did puzzle me.  Why would the parties of the left, evincing (otherwise) no conversion to the cause of smaller governments, (a) commit themselves to such a relatively moderate share of GDP in govermment spending, and then (b) aim to undershoot that?

Here is what I mean.  In the chart I’ve shown Treasury’s core Crown expenses series as a share of GDP, including the projections from last week’s HYEFU.  I’ve also shown averages for the periods each of the previous three governments were responsible for (thus the former National-led government mainly determined fiscal outcomes for the year to June 2018). 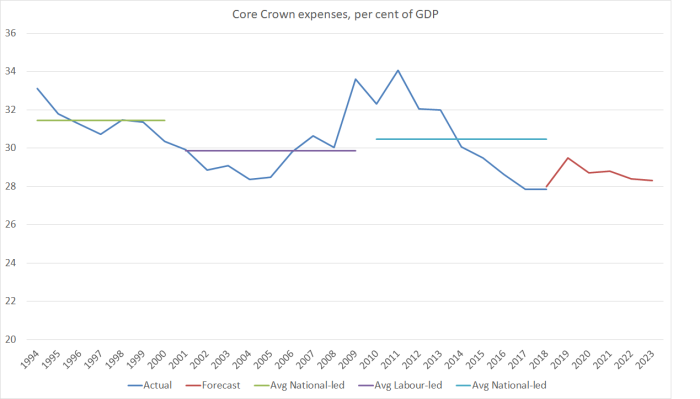 On the government;s own numbers (and these are pure choices, made by ministers), core Crown spending in the coming five fiscal years (including 2018/19) will be lower every single year than the average in each of the three previous governments, two of which were led by National.   Sure, there was a severe recession in 2008/09 –  not that fault of either main party here –  and then a severe and costly sequence of earthquakes (ditto), but on these numbers government operating expenditure as a share of GDP in 2022/23 will be so moderate that in only two years of the previous fifty (Treasury has some not 100% comparable numbers back to the early 70s) was spending even slightly lower (those were the last two years of the previous government).

It isn’t as if the economy is grossly overheated (which might suggest a need for considerable caution, since GDP might soon go pop).  Treasury estimates that the output gap is barely positive over the entire projection perion (the numbers so small we might as well just call them zero).   Of course, Treasury (and other forecasters) never forecast recessions, and it seems quite likely that some time in the next five years we will have one.  All else equal, a recession would raise government spending as a share of GDP, but even a 4 per cent loss of GDP in a recession –  which would be pretty severe, similar to 2008/09 –  would only raise the share of spending to GDP by little over one percentage point.   Spending, at the trough of a severe recession, would still be under 30 per cent of GDP –  which was presented in the budget responsibility rules as something they want to fluctuate around, not as an untouchable electric fence.

The only plausible explanation I can see –  after all, the government show no “small government” inclinations when it comes to, eg, regulation –  is the weight they ended up placing on the net debt target.  But that was even more arbitrary than the spending rule.

In isolation, they could spend $5 billion more in 2022/23 and still only have spending as a share of GDP at around the average level of the previous Labour-led government.   Given the low quality of many of the things they are already spending on (fee-free tertiary education, regardless of means or ability, or the Provincial Growth Fund, to take just two examples), I’m reluctant to encourage them.  But it still looks odd.