Skip to content
HomeExports of services: a dismal picture

One element of the tradables sector that is commonly supposed to be doing well is exports of services: tourism, export education, and the rest.   The government has indicated that it hoped the ICT component would surge ahead and, on some definition or other, be the “second largest contributor to our economy by 2025”.

But how have services exports  actually being doing, as a share of the economy?  Here is the New Zealand chart. 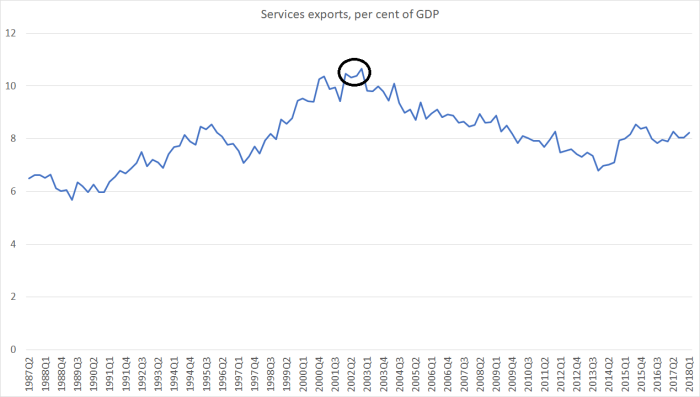 There was really strong growth over the 15 years or so to the peak (marked) in around 2002.  Services exports lifted from less than 7 per cent of GDP to in excess of 10 per cent.  Since then, the trend has been back downwards again –  the current level only a touch above 8 per cent.  And, at that, one of the largest components –  export education – is, in effect, quite subsidised, by being bundled together with the ability to get work rights and residency points.

How have other advanced countries done?

I don’t fully understand what was going in the former Communist countries in the first few years of the century, although since in many there was a big boom in domestic demand and credit, the export sectors (especially the bits not involving FDI) were probably under pressure.   Whatever the story for those countries then, both lots of small advanced countries have seen rising shares of their economies accounted for by services exports over the past decade.  We haven’t.

Here is another way of looking at our experience, looking at the percentage point change in the services exports share of GDP since our peak in 2002.

There were two –  of 34 – OECD countries that saw a slightly larger fall in the GDP share of services exports.  In one case, the growth in goods exports more than offset the fall.  In the other –  Chile –  both goods and services exports shrank as a share of GDP, as happened in New Zealand.

As ever, foreign trade isn’t everything.  But when your per capita incomes and productivity are so far behind the leading countries in the OECD, the typical way in which a country would undergo a sustainable lift would involve a larger share of the economy accounted for by both exports and imports  That just hasn’t happened in New Zealand –  and, of course, neither has there been any catch-up.   Which isn’t surprising when, on the measure I illustrated yesterday, the real exchange rate over the last 15 years has averaged 27 per cent higher than the average level in the previous 15 years.

That higher real exchange rate didn’t get there by chance.  It was the consequence –  mostly unwitting – of deliberate government choices.

On which note, it is nine months today since the election.  In other words, a quarter of the government’s term has gone.  And, as far as I can see, there is nothing in policy announced, or foreshadowed, likely to do anything to close the productivity gaps,  materially alter the real exchange rate, narrow the large average interest differentials, or sustainably increase the export share of our economy so that in turn we can support a larger import share.  Oh, and market prices suggest no confidence that the manifest evil that is the housing market is on the way to being fixed either.

17 thoughts on “Exports of services: a dismal picture”