The latest quarterly GDP data came out just before Christmas, and they included substantial revisions to the data for the last few years, flowing on from the annual national accounts data released in November.

The actual level of GDP is now a bit higher than had previously been reported, but what caught my eye was the reported claim from the former Minister of Finance, Steven Joyce, that the new data suggested that there was no productivity growth problem after all.   You’ll recall that for some time I –  and others –  have been highlighting data suggesting that there had been basically no productivity growth at all in New Zealand for the last five years.

Mr Joyce says the figures released today finally put to bed the fallacy that New Zealand was having a ‘productivity recession’.

and he went on to claim that

“These figures provide clear confirmation that the new Government has inherited a very strong economy driven by the strong economic plan of the previous Government.

So what do the productivity numbers look like on the revised GDP data?  You may recall that I’ve been calculating nine different measures of real GDP per hour worked (using the two quarterly measures of GDP, and the HLFS and QES hours data, and an average measure).    Since GDP for the last few years had been revised upwards and the hours numbers weren’t touched, productivity growth was inevitably going to be a bit stronger than previous estimates had suggested  (which was a relief, because the previous estimates had, if anything, suggested a modest fall in the level of productivity and that didn’t really ring very true).

Here is how the average measure of real GDP per hour worked has behaved over the almost 10 years since 2007 q4 (just prior to the 08/09 recession).

Using the same average measure, I calculated the average annual rate of productivity growth for a few historical periods:

And here is the comparison with Australia, on the newly-updated New Zealand data. 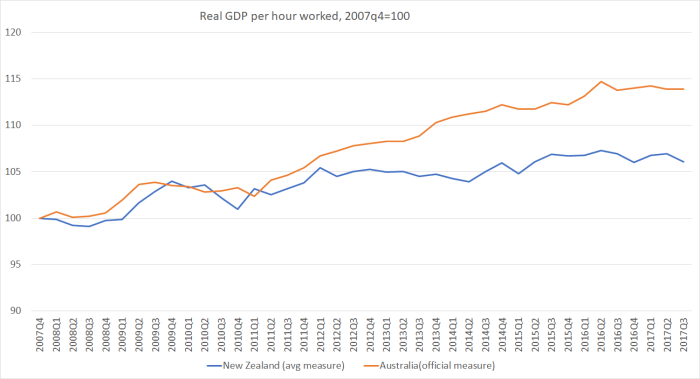 Australia’s numbers seems to have been flat for the last couple of years, but even over that short period we’ve done a bit worse than they have.

If these results are what Steven Joyce had in mind in talking of a “very strong economy driven by the strong economic plan” one can only really shake one’s head in despair.   If there was a plan to lift overall productivity performance, it clearly didn’t work.  Economic policy was simply misguided, and seems to have paid no attention to the severe limitations of our location.   Perhaps more depressing –  given that Joyce and his colleagues are in Opposition –  is that there is little sign that the new government has any more convincing a strategy  (and where is the deeply-grounded persuasive advice of MBIE and Treasury?).   One hopes –  but is that just against hope –  that they care.

On more mundane matters, I had cause to wonder about even the cyclical strength of demand when, over the holidays, one evening my wife and I walked from Epsom to Parnell and back, and were staggered by just how many empty shops there were in both Newmarket and Parnell.    Any reader insights into just what is going on (or not) in those up-market shopping districts would be of interest.