But here are the New Zealand and Australian net national savings rates plotted on the same chart. 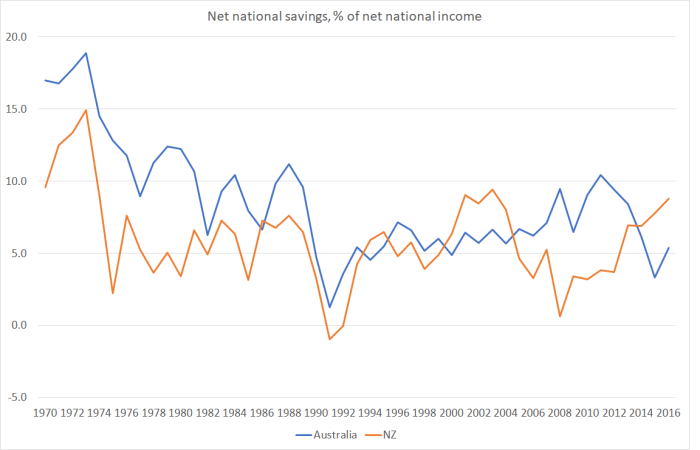 For the last couple of years, the net savings rate of New Zealanders has been higher than that of Australians.  I wouldn’t want to make very much of a couple of years data, and over, say, the last 25 years, the average savings rate of New Zealanders has still been a little lower than that of Australians.  But even that average gap has been much smaller over that period than over, say, the previous 20 years.

It isn’t a story you would typically hear from those who argue that savings behaviour is at the heart of New Zealand’s economic challenges.   Some will point to the compulsory private savings system now in place in Australia (phased in from 1992).  There is no easy way of assessing the counterfactual –  what if the system had never been introduced? –  but there is no obvious sign that the system has led to a lift in national savings rates in Australia, whether absolutely or relative to New Zealand.  Others will (rightly) highlight the big tax changes implemented here in the late 1980s which materially increased the tax burden on income earned by savers (in a way pretty inconsistent with the recommendations of a lot of economic theory).  I don’t think those changes were appropriate, or even fair, and would favour a less onerous regime.  But in the decades since the changes were made, our savings rates have been closer to those in Australia (where a less onerous tax regime applies as well) than they were in the earlier decades.

One policy change that may have made a difference is overall fiscal policy: the improvement in New Zealand’s overall fiscal position (reduction in general government debt) has been larger than that in Australia (largely reflecting the fact that we were in a bigger fiscal hole 25 or 30 years ago).   Higher average rates of public saving may have lifted average national savings rates to some extent.

What about other countries.  In a paper I wrote some years ago for a Reserve Bank/Treasury conference, I illustrated that over time New Zealand’s savings rate hadn’t been much different from that of some other Anglo countries.  Here is a more recent version of that sort of chart. 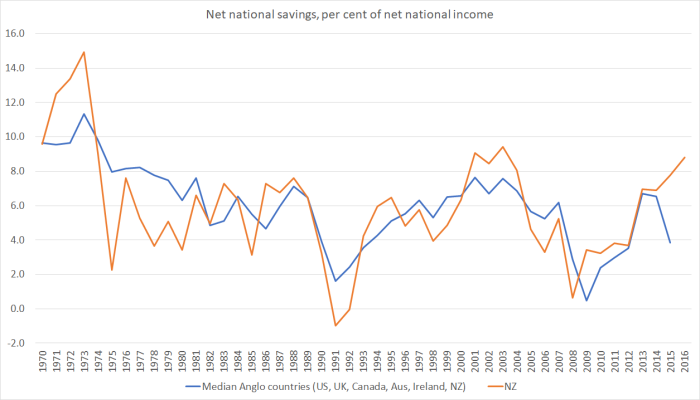 New Zealand’s national savings rates have typically been below those in the OECD group of advanced countries as a whole (and perhaps particularly some of the more economically successful of those countries –  whether by chance, cause, or effect).   But even on that score the last few years look a little different.   This chart compares New Zealand against the median of the 22 OECD countries for which there is consistent data over the full period. 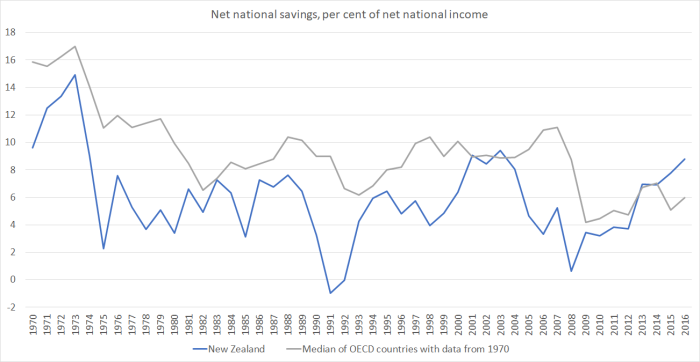 It is quite a striking change, and the reasons aren’t at all clear (see yesterday’s post on the puzzles around the New Zealand data).  Perhaps in time some of the rise in the New Zealand savings rate will end up being revised away.  Perhaps the lift will prove real, but temporary (as, say, happened for a few years around 2000). But if not, the apparent change in the relationship between our savings rate and those in other advanced countries should help keep our real interest rates –  and our real exchange rate –  a bit lower than otherwise.  If sustained, that would be expected to lift our economic prospects a bit, all else equal.